Hello, everyone, my name is Colin Schneider. I have been a member of the CFZ for nearly 5 years. I'm the host of a live digital radio show called the Crypto-Kid every Monday night at 8 pm EST. Jon was kind enough to give me access to the CFZ blog to put up announcements for my show.

So, tonight on the Crypto-Kid, I will be joined by Nick Redfern, author of over 30 books on cryptozoology and the unusual to talk about his newest book Shapeshifters: Morphing Monsters and Changing Cryptids. This is going to be a great episode! 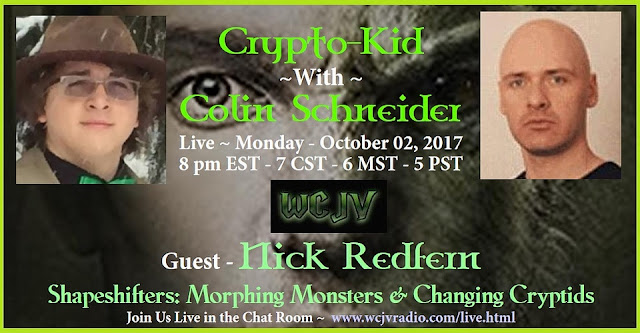 Posted by Colin Schneider at 2:11 PM No comments:

Breakingnews247.net
The latest sighting of Big Foot was reported today September 28, 2017 by two deer hunters prepping their hunting site before the season begin for the ...

IMDb
Bigfoot is real. Or so a new documentary, Discovering Bigfoot, will try and prove. The legend of the creature known as Bigfoot has fascinated mankind ...

WSIL TV
"I stopped because I just seen the sign that said Shawnee National Forest Bigfoot," said Terry Alexander who was visiting from Florida. "We joke about ...

Dread Central
Next year Reality Entertainment and The Sylvanic Cooperation are bringing us Discovering Bigfoot, the first feature documentary with real live ...

Yakima Herald-Republic
Naturalist to talk about search for Bigfoot at Kittitas County Historical ... will discuss how people can evaluate evidence to decide if Bigfoot is real or a ...

Legends Beware: Bigfoot Witness 2017
Sasquatch Chronicles
A witness recalls his Bigfoot encounter in Georgia from back in 1975. Interviewed by David Bakara at Expedition Bigfoot: The Sasquatch Museum ...

UPDATE – Bigfoot filmed with Les Stroud in Texas
Sasquatch Chronicles
Great follow up video. As you can see from this video sometimes pareidolia comes to life. Pareidolia is a psychological phenomenon in which the mind ...
Posted by Jon Downes at 5:00 AM No comments: