There is one exhibit above all others in the Signal Tower Museum in Arbroath (one-time home of the lightkeepers) which I have always pondered over - what's more even greatly admired -and that is an old cast-iron hand grip, . . . a relic from the early days of the Bell Rock. It was one of number which once adorned the outside of the old-style pre-1902 lantern. They were there to steady keepers when cleaning the outside glass or effecting any repairs required on the lantern. Although much painted over decades of use, the shape is unmistakeably that of a mythical sea serpent!

In Newfoundland, over 2000 miles away, work had begun in the early 1830s on their own lighthouse building programme.

When visiting Bonavista in 2007 and being shown round the tower by Don Johnson the curator, there much to my surprise was the same serpent-shaped hand-grip adorning the lantern astragals . . this one even more heavy painted than its Arbroath counterpart! In fact there were 16 of them (one on each vertical astragal) - a full complement no less. I don't think I ever heard tale of a lantern also going out with the light mechanism from Scotland. We do know that the Bell still had theirs in 1902 when it was replaced by the standard diagonal variety. So where did the one at Bonavista originate? There are a few possibility - but in all probability it must have come from Scotland - most likely from Stevenson's engineering works in Edinburgh. It obviously requires more research, so any comments would be appreciated.

Newest posting on the blog is one of the Loch Ness Monster on Land sightings singled out for special comment:

http://frontiersofzoology.blogspot.com/2011/06/most-exceptional-loch-ness-land.html
Posted by Jon Downes at 8:27 PM No comments:

From CFZ Australia:
Philippines lizard has distinctive trait
Meet the Cryptozoologist: Paul Clacher
Posted by Andrew May at 2:04 PM No comments:

It should have been launched last weekend, but with computer issues we are running a few days late. However, it will be up sometime this week. Coming soon: CFZ Canada. Many thanks to Mark North for his fine logo.
Posted by Jon Downes at 11:52 AM No comments:

Waving goodbye to South America, we head up north into Central America with our first stop being Panama.

What an interesting country! Its most famous feature is perhaps the Panama Canal, which connects the Pacific Ocean with the Atlantic Ocean and certainly speeds up maritime travel times. In the late '80s it was equally well known for its dictator who bore a striking resemblance to a cartoon villain from the Tick series called Pineapple Pokopo. In recent years Panama's greatest claim to fame in the UK was the solving of a mystery in 2007 when the missing canoeist John Darwin turned up buying property, an appearance that alerted authorities to the fact he had faked his own death a few years earlier. However interesting that is, there is another mystery lurking in the countryside; for want of a better name, it is the Man Beast.

It was in 1920 that a prospector by the name of Shea was alleged to have shot a large unknown hominid in the Serrania del Sapo mountains of the Darien province. He would describe the creature as being six feet tall and covered with black hair. The beast’s feet were ape-like with big toes protruding like thumbs while he estimated the beast’s weight to be some 300 pounds. Of course in best mystery hominid tradition the corpse was neither photographed nor preserved, ensuring that the mystery of the nature of the man beast continues up to today.

Next stop: Costa Rica.
Posted by Jon Downes at 11:49 AM No comments:

SEPARATED AT BIRTH (Thanks to Corinna for this one) 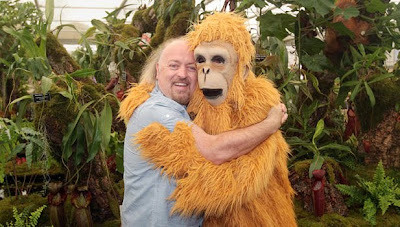 It has often been noted that comedian Bill Bailey looks a little like our very own Richard Freeman, but now he is even getting in on Richard's orang pendeicular activities....

Quite a few interesting people were born on this day so just for fun see how many of them you recognise without having to click their names for their biography on Wikipedia: Beau Brummell, Paul Gauguin, Charles Rennie Mackintosh, Dean Martin, Tom Jones, Muammar al-Gaddafi, Michael Pennington, Liam Neeson, Mick Foley, Damien Hirst, Bear Grylls and Wilton Crandelwoop.
And now the news, expertly compiled by Gavin Wilson:

Did you get some good holiday snaps? Hunt is on fo...
Yorkshire restaurant owners’ fears over dog chip r...

This guy would sort it out:
http://www.youtube.com/watch?v=lgGKSjiw0HQ
Posted by Jon Downes at 11:38 AM No comments:

AMONGST ALL THE BAD NEWS OF COMPUTERS AND WASHING MACHINES...

Late last night we got our two millionth hit!
Posted by Jon Downes at 11:24 AM No comments:

This 45th collection once again really is a collection of completely uncategoriseable stuff, including a mystery illness in Honduras, a rabid bat bite, Admiral Byrd, OOP dolphin, angry deer, a goose mascot, and the snails that stopped a Moroccan train. Good stuff.

HERE
Posted by Jon Downes at 9:07 AM No comments: