RSPB: The snake that came in from the cold 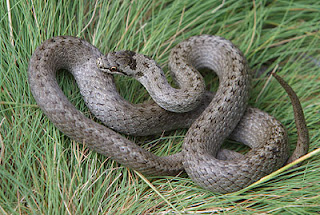 This is the story of a location misted by a veil of secrecy, of mysterious codenames, and unnamed conservation workers, like the plot of a spy novel. It is also the story of a snake.
Let’s start at the beginning (imagine being briefed by a hard-faced spymaster): ten smooth snakes were released at an RSPB site somewhere in Devon in 2009, followed by another seven in 2010 – because of the sensitivity we cannot reveal the precise location.

The re-introduced snakes – the UK’s rarest reptile, largely restricted to a few heaths in Dorset, Hampshire and Surrey – then went to ground for several years.

Evidence the shy and secretive reptile was breeding came this year when a recently born snake was seen, photographed and given the codename Cyril.
Agent T – we can say he or she is an RSPB staffer – takes up the story: “I expected them to breed and may be they have been breeding but we have not seen any evidence, they are very elusive. Then, about three weeks ago, we found a juvenile from this year, so that indicates they are actually breeding.

“It’s great they are breeding, we took the initiative to re-introduce them, we beavered away to improve their habitat and now we’ve got a good result.”

Smooth snakes are extraordinarily difficult to find – it can take ten years of work simply to prove the species is present or absent from a particular place – and those recorded at the re-introduction site are given names beginning with C: Cedric was recorded in 2010 and 2011, Celia in 2011.
Both could have been born in Devon, some of the re-introduced females may have been pregnant, but, crucially, it wasn’t evidence the new population was breeding.
Agent R – we can say he or she is an RSPB volunteer – and a crack team of fellow conservation volunteers have been watching for the snakes since the first were re-introduced, visiting the site at least once a fortnight, from March to October; having first memorised the password and checked they were not being followed, naturally.
Agent R said: “We saw snakes on a number of occasions in the first year, and a number of times in the second year, then hardly anything for four years. Then this year we got lucky and we have seen two adults and a kiddie.

“Now we have got evidence proving breeding and there is a chance there may be others, so we are over the moon.”
The two adult snakes seen with Cyril have not yet been given names.
Nick Moulton (yes, it is his real name), of the Amphibian and Reptile Conservation Trust, one of the partners in the re-introduction project, said: “It really is a difficult species to work with so for the volunteers to stick with it and find that proof of breeding is brilliant. It is now re-established in Devon, this really is a big find.”

The re-introduction was a partnership between the Amphibian and Reptile Conservation Trust, Clinton Devon Estates, and the RSPB, supported by English Nature.
Posted by Jon Downes at 6:12 PM No comments:

More Bigfoot Fun With Barb and Gabby
Bigfoot Evidence
Hello everybody! Yeah, I think the Bigfoots are around :). This week, join us for 3 walks up the trail, morning, afternoon and night. See some new ...

Is bigfoot just an upright-walking bear? We asked the experts.
Washington Post
We here at Animalia aren't authorities on Bigfoot, nor do we vouch for its existence. So we reached out to the experts for some analysis. Bigfoot ...

Bigfoot: Portrait of an Animal That May Not Exist
Outside Magazine
The name “Bigfoot” was coined on October 5, 1958, by Humboldt Times editor Andrew Genzoli in a column about extraordinarily large footprints ...

The Man Who Created Bigfoot
Outside Magazine
Before he had ever heard of Bigfoot, Bob Gimlin had led the life of a man who feared nothing, who thrived on dares and several times cheated death.

How to Search for Bigfoot in the 21st Century
Outside Magazine
Bigfoot, if he exists, is incredibly good at remaining unseen. For decades, folks have reported sightings of the legendary beast, yet strikingly few clear ...
Posted by Jon Downes at 12:41 PM No comments:

THE GONZO BLOG DOO-DAH MAN IS THEREFORE HE IS

ON THIS DAY IN - 1699 - Captain William Kidd, the pirate, was captured in Boston, MA, and deported back to England.
And now some more recent news from the CFZ Newsdesk