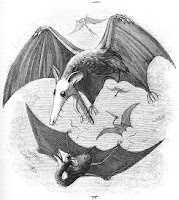 And so, the week trundles on. Mother-in-law and Prudence the dog have established a firm psychic connection, Graham and I are preparing for next weekend's Open Gardens weekend, and last evening the ceiling in the pink bathroom fell in. Just another day really...

Today we open Gonzo Daily, with part two of our Song by Song look at 'California Star', the smashing new album by Martin Stephenson:
http://gonzo-multimedia.blogspot.com/2012/06/song-by-song-california-star-by-martin_18.html

Occasionally I veer away from purely Gonzo stuff, to write about music and books that interest me. Today I have a look at the new album by Dexys (not 'Midnight Runners' any more) and end up wittering about Michael Des Barres:
http://gonzo-multimedia.blogspot.com/2012/06/album-review-kevin-rowland-like-michael.html

A peculiar (and unintentionally hilarious) review of the new Rick Wakeman live album. By the way, in these politically correct times, I should probably point out that I am laughing at the peculiar results obtained by online translation software, rather than pointing out that Johnny Foreigner is a rum cove:
http://gonzo-multimedia.blogspot.com/2012/06/wakeman-as-he-is-spoke.html

I have just found the most peculiar website yet to feature the irripressable (I think that's how you spell it) Michael Des Barres:
http://gonzo-multimedia.blogspot.com/2012/06/michael-des-barres-on-the-internet.html

Whilst on the subject of 'peculiar', the lovely Helen McCookerybook's blog can be a very peculiar place:
http://gonzo-multimedia.blogspot.com/2012/06/mccookerybook-blog.html

On this day in 1978 the actress Zoe Saldana was born. Saldana has stared in Pirates of the Caribbean, Star Trek, and in Avatar.

Saldana's most well known role was as Neyteri in James Cameron’s Avatar:

In the eighth grade at Clark Junior High School in Anchorage, students were all required to study Alaska History. Fair enough, but since the great state of Alaska was only a few decades old at that time, we finished our required history lessons fairly quickly, in approximately three weeks. After all, you can only study larger-than-life characters like Soapy Smith, Joseph Juneau and Linious "Mac" McGee before you start to run out of colorful history.

To fill up the rest of the semester, the very old and very wise Mrs. Johnson (not her real name; changed to protect the innocent -- or guilty, depending on how you look at it) decided to teach us about Alaska myths and legends. I’m pretty darn sure she had a hidden agenda -- to pay back all the little hellions that frequently disrupted her class by scaring the living daylights out of us and filling our nights with cold sweats and nightmares of baby-stealing, child-eating monsters.

To make it even worse, she insisted on testing our knowledge of these critters to make sure we’d never forget them! So here are five mythical creatures of Alaska that haunted my dreams.

with a cast of his own foot and one of a yowie.

SNARLING, 3m "hairy men" could be sneaking around in bushland near you right now.

Yowie researchers are on their way to the Northern Rivers, citing new evidence that these mysterious creatures are living around Lismore and Casino.

Known as the "Bigfoot of the Bush" or the giant "hairy man", yowie believers say the beings are a primitive, ape-like race dating back at least two million years.

The father of yowie research, Rex "The Yowie Man" Gilroy, will be leading the investigation in Lismore.

Mr Gilroy and his wife, Heather, are directors of the Australian Yowie Research Centre, which they set up in 1976 in an effort to gather evidence of yowies for scientific assessment.

Now they are bringing their work to the Northern Rivers after reports of recent sightings.

Coming with them are a number of cryptozoologists (people who search for animals whose existence has not yet been proven), and they are looking for local input.

"We will be following up a number of new leads," Mr Gilroy said.

I TRIED TO SELL THE PICTURES TO HELLO MAGAZINE, BUT THEY WERE OUTBID BY THE CFZ BLOGGO 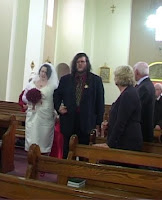 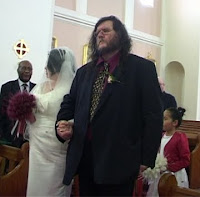 We are back home, very tired, but as you can see from these two exclusive images I did my bit giving away the CFZ Bloggo Sub-Editor Lizzy Clancy to her new husband Paul Bitakaramire. I think you will agree that this is a pretty good excuse for having left the blogs in the tender care of Graham for the last few days. Actually, I think he did pretty damn well....

Well, we are back, and if there are any of you who want to know what several of the Gonzo Daily posse were doing in a Roman Catholic Church in Heywood, Lancs. This is what:
http://gonzo-multimedia.blogspot.com/2012/06/we-tried-to-flog-pictures-to-hello.html
(and it is probably the only time you will see me wearing a suit in these hallowed pages)

I would like to say a very big thank you to Graham. I think that he did a magnificent job keeping the various blogs and newsfeeds ticking over satisfactorily. We had better hits under his management than we usually do under mine. Perhaps I should go away more often.

Today we start off with the official news release for Michael Des Barres' new album. I confidently predict that we shall be reading lots more abvout him in the days and weeks to come:
http://gonzo-multimedia.blogspot.com/2012/06/song-by-song-california-star-by-martin.html

Now we have the beginning of a new series: Song by Song. Basically I go through an album song by song, and then pass my notes on to the artist who made the album in the first place, and see what they have to say. And we start off this exciting new series with the irrepressable Martin Stephenson and his smashing new album California Star:
http://gonzo-multimedia.blogspot.com/2012/06/song-by-song-california-star-by-martin.html

We have three songs from the recent Hawkwind gig in Edinburgh:
http://gonzo-multimedia.blogspot.com/2012/06/hawkwind-three-songs-from-edinburgh-gig.html

And there is a link to an interesting Troy Donockley review, but I have to say that I am not quite sure what he is getting at when he talks about confectionary. Anyone who disses toffee must be prepared for as Gonzo Daily hit squad...
http://gonzo-multimedia.blogspot.com/2012/06/link-troy-donockley-uk-review.html

We have an exceptionally enthusiastic review of Jon Anderson in Seattle:
http://gonzo-multimedia.blogspot.com/2012/06/hawkwind-three-songs-from-edinburgh-gig.html

And finally the one and only Davey Curtis. He is a happy bunny today:
http://gonzo-multimedia.blogspot.com/2012/06/curtis-monologues.html

And that is about it for my first day back. Expect interviews with Wally, and Helen McCookerybook over the next week or so. Jon Downes is in da house!
Posted by Jon Downes at 11:46 AM No comments:

THE RETURN OF THE KENTUCKY GOBLINS?

A man in western Kentucky is convinced that his family is being terrorized by a race of cave-dwelling creatures that he believes to be extraterrestrial in origin. The gentleman, who we’ll call “David” (who would prefer his identifying information kept private, for now), claims that his property has been the subject of almost nightly attacks by beings that he describes as “the size and stature of a small child, devoid of any facial features save for large, oily eyes and lipless mouths”.

On this day in 1928 Amielia Earhart became the first female to be flown across the Atlantic Ocean when she was a passenger in a plane piloted by Wilmer Stultz. She managed a solo flight four years later in May 1932 and she disappeared in 1937 during an attempted circumnavigation of the globe. Several conspiracy theories have arisen about Earhart's disappearance which you can read about on wikipedia here: http://en.wikipedia.org/wiki/Amelia_Earhart#Theories_on_Earhart.27s_disappearance

A real treat for the 'vaguely related video link' today, this is one of my favourite songs of all time and based partially on Earhart and another female aviation legend who died in mysterious circumstances, Amy Johnson. Flying Sorcery by Al Stewart: