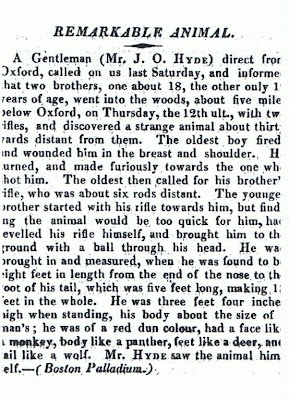 On Friday May 6th I travelled down from Macclesfield to the Bodleian Library in Oxford to do a day`s research and was quite successful. I suppose the high point was a story of a brilliant red panther skin hung up in a hall or temple in `Cathay`. Ie China, though the source did not give an exact date, though my impression was this was hundreds of years ago. I am awaiting the extract from the book to arrive my post within about a week and I can give the exact details then if anyone expresses an interest. The same book also mentioned a 6 legged snake said to exist in Poland, again in antiquity.

Other items found were: `An animal with a head like a cat, 4 feet like a leopard, hind feet like a ferret, purple eyes, 3 white marks over the right eye, 3 black over the left. Whitey-brown colour, spotted with red. Tail beautiful white tipped with blue. ` Seems like just a story-filler to me. This was at Reading,Yorks in The Morning Post of 9-1-1828.

Also amazing was the story from the Boston Palladium (sorry I forget to note the date, but it would be early to mid 19th Century) I have scanned to Jon, he may have been able to include it here, of strange cat like animal near Oxford.

The Standard (London) of 19-2-1829 reported on a child of a labourer at Donington who voided up an animal like a locust “with 2 remarkably prominent eyes” Gross!

There is a story also from the Sheffield Independent of 11-5-1833 of a wolf-like animal at Coulsdon, Surrey. Was it supernatural?

The Caledonian Mercury of 4-7-1839 says [quoting the Gloucester Journal]: ` About a fortnight ago a strange large animal was observed on the sands of the Severn at Purton, and as a man went towards it, it retreated towards the water. This emboldened the pursuer and he soon approached very near to the animal, upon which it turned round and exhibited a countenance of such apparently extraordinary ferocity and disposition to do battle , that the man was glad in his turn to take to flight with pretty considerable speed. He then procured a large duck gun with a man to accompany him, and to lend his shoulder to support the gun while he took aim, and by this means the strange visitant was very soon dispatched. On examination it turned out to be a walrus or morse, a well known animal of the seal tribe in the Polar seas, but which very seldom, we believe, is seen in these latitudes. It was quite young, as it measured only about seven or eight feet in length, while the average length of a full grown walrus is from twelve to sixteen feet, and some have even measured twenty feet. After its death it was, we understand, conveyed to Berkeley Castle, where its tusks &c, will probably be added to the other trophies of the chase which are preserved in that ancient baronial fortress.

I AM THE WALRUS

Sitting on a cornflake, waiting for the van to come
Corporation tee-shirt, stupid bloody Tuesday
Man, you been a naughty boy, you let your face grow long
I am the egg-man, they are the egg-man
I am the walrus, goo goo g`joob
Posted by Jon Downes at 11:45 AM No comments: 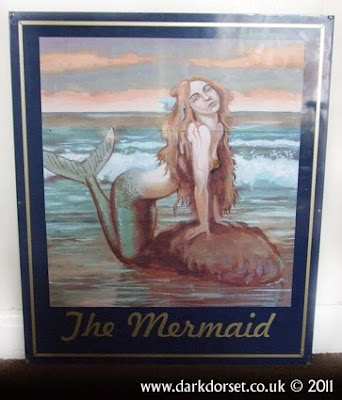 In reference to Neil Arnold: Notes from Norfolk, with regards to pub signs with cryptozoological themes. Last year I was very lucky to purchase the pub sign from 'The Mermaid' Inn, Portland at a car boot sale in Dorchester. I was very surprised to find it only to learn the sad truth that the 'Mermaid Inn' closed in 2009 and after a long time standing boarded up work had began in 2010 to turn the inn into a house.


The local folk story, that gave the pub its name, occured one morning during the 18th Century. When a mermaid was found on the shingle beach at Church Ope Cove, as the people were going to a service at St. Andrew's Church. The creature's body was said to have ben taken up to the church, where she susquently died at noon. (http://www.darkdorset.co.uk/mermaid_of_church_ope_cove) 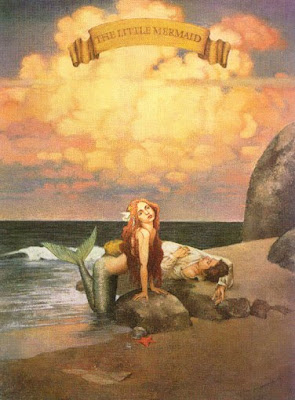 ave been other signs in the Mermaid Inn's history) is based on this painting, I believe is an interior book plate for Hans Christian Anderson's 'The Little Mermaid. Do any of the readers have any ideas on who the illustrator is?
Posted by Jon Downes at 11:38 AM 1 comment:

On this day in 1838 the assassin of American president Abraham Lincoln, John Wilkes Booth was born. According to folklore Lincoln predicted his death after the appearance of a doppelgänger.
And now the news:

Beat boxing parrot:
http://www.youtube.com/watch?v=UnFV-fvgOu0
Posted by Jon Downes at 11:31 AM No comments: