Many apologies to everyone who has been trying to contact me for the last twenty four hours, but Prudence is unwell, and is being spectacularly sick everywhere. We are all very worried and she will be going to the vet tomorrow... 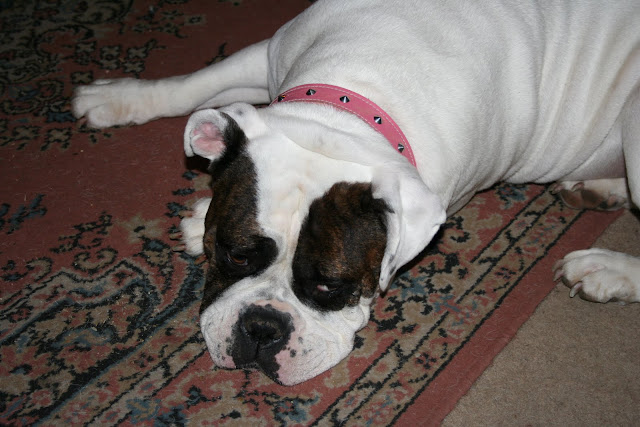 Posted by Jon Downes at 3:14 PM No comments:

http://www.gonzomultimedia.co.uk/about.html
On Sundays, for no particular reason except that it amuses me, the daily notifications are done in rhyme
I slipped beneath the radar at about teatime on Saturday
but I'd done most that I had to do, so I guess it doesn't matter, hey?
but my dog is poorly, my head is bursting, and there's stuff I won't go into now
and I'm sorry I was out of reach but I needed to be here (and how)
and once I've done the Sunday blogs I will go back our of reach again
to be here with my family until the time when
I'm back on parade tomorrow all smiles and taut sinews
and Prudence goes to see the vet and the game of life continues
Billy Sherwood served as a peacekeeper during Yes’...
http://gonzo-multimedia.blogspot.com/2014/12/billy-sherwood-served-as-peacekeeper.html
PRUDENCE IS UNWELL
http://gonzo-multimedia.blogspot.com/2014/12/prudence-is-unwell.html
GONZO TRACK OF THE DAY: Hymn to Pan (Faun)
http://gonzo-multimedia.blogspot.com/2014/12/gonzo-track-of-day-hymn-to-pan-faun.html
THOM THE WORLD POET: The Daily Poem
http://gonzo-multimedia.blogspot.com/2014/12/thom-world-poet-daily-poem_7.html
GONZO WEEKLY #107
http://gonzo-multimedia.blogspot.com/2014/12/gonzo-weekly-107.html
The Gonzo Weekly #107
www.gonzomultimedia.co.uk/about.html
Ant-Bee, Jethro Tull, Dee Palmer, Lemmy, Frank Zappa, Astronomusic, Jon Anderson, Yes, Hawkwind, and Daevid Allen fans had better look out! The latest issue of Gonzo Weekly (#107) is available to read at www.gonzoweekly.com, and to download at http://www.gonzoweekly.com/pdf/.
It has Ant-Bee Billy James on the cover, and features an interview with him by Yours truly. Doug Harr interviews the legendary Dee Palmer, once of Jethro Tull and we send Astronomusic to a desert island. Jon looks at Lemmy's autobiography, Hawkwind go to Japan, and we remember the great Frank Zappa. And there are also new shows from the multi-talented Neil Nixon at Strange Fruit and from M Destiny at Friday Night Progressive, and the titular submarine dwellers are back with another episode of Sub Reality Sandwich (except its not). There is also a collection of more news, reviews, views, interviews and anteaters wishing to snooze (OK, nothing to do with dozy edentates, but I got carried away with things that rhymed with OOOOS) than you can shake a stick at. And the best part is IT's ABSOLUTELY FREE!!!
The complete list of artists featured in this bumper fun packed issue is: Frank Zappa, Mike Joyce, Pink Floyd,Elton John, AC/DC, Gong, Daevid Allen, Quarto Vuoto, The Who, Steve Hackett, Strange Fruit, Sub Reality Sandwich, Friday Night Progressive, Ian McLagan, Bobby Keys, Nick Talbot, Bob Montgomery, Stoner, The Doctors of Madness, Clive Palmer, The Fall, Captain Beefheart and his Magic Band,  Mick Farren and The Deviants, Aviator, Mick Abrahams, Joey Molland, Steve Ignorant,  Hugh Hopper & Phil Miller, Tony Palmer, Barbara Dickson,Ant-Bee, Jethro Tull, Dee Palmer, Astronomusic, Lemmy, Yes, Peter Banks, Rick Wakeman, Geoff Downes, Mabel Greer's Toyshop, Steve Howe, Jon Anderson, Patrick Moraz, Like a Storm, Tinkicker, Winter, Ancient Rites

*  Jon Downes, the Editor of all these ventures (and several others) is an old hippy of 55 who - together with an infantile orange cat named after a song by Frank Zappa puts it all together from a converted potato shed in a tumbledown cottage deep in rural Devon which he shares with various fish, and sometimes a small Indian frog. He is ably assisted by his lovely wife Corinna, his bulldog/boxer Prudence, his elderly mother-in-law, and a motley collection of social malcontents. Plus.. did we mention the infantile orange cat?
Posted by Jon Downes at 2:55 PM No comments:

AND TO WHISTLE WHILE YOU WORK... (Music that may have some relevance to items also on this page, or may just reflect my mood on the day)
Posted by Jon Downes at 9:59 AM No comments: