Zombies From History by Geoff Holder 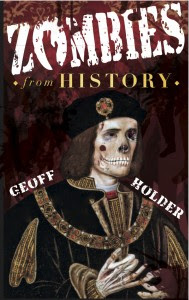 Zombies From History by Geoff Holder is everything the fully prepared and thoughtful zombie hunter needs to know.  Published Oct 2013, £9.99, this paperback original contains the secrets of sixty high-value targets from Britain’s illustrious (and ignoble) past.

The Walking Dead. Walkers. Biters. Eaters. The Infected. The Contaminated. The Re-animated. Revenants. The Living Dead. Whatever you want to call them, the zombie apocalypse is coming. You know it, I know it.

Contemporary zombie culture did not start with The Night of the Living Dead. The dead have been returning for centuries. History is peppered with accounts of those who were declared dead but yet lived; those who survived the hangman’s noose or were buried alive; and descriptions of bog bodies, preserved corpses and mummified remains.

So, faced with the inevitable, what do you do? Do you wait until that dull bloke from No.37 is lurching through the French windows? Or do you step up, take some pride in your actions, and take out some of history’s big guns before you are finally eaten? Would you itch to take on one of the grandees of nineteenth-century literature, or test yourself against an axe-wielding medieval bampot? Wrestle with Nelson? Battle with Boudica? Then here, friend, is your opportunity. Where they are buried, what wounds and weaknesses they bear, height, age, difficulty level – everything the fully prepared and thoughtful zombie hunter needs to know.

Geoff Holder has more than twenty books on the paranormal to his name, and gives talks at the Ghost Club and other well-known societies throughout the year.  He has just moved to a     farmhouse in the French countryside, but makes regular trips back to the UK for signings and talks.

It’s been a couple of months and I still don’t really have much to blog about. Nor do I have any ideas for more articles. I’m deep into family history research and that’s taking a great deal of my time. I paid a lot for a subscription to a research site, at least a lot for me, and I intend to get my money’s worth, LOL.Apart from that the last couple of months have been very up and down for me. Having recovered from a recent bout of severe stress, due to family health reasons I, too, have some problems. I’ve been prescribed 6 months’ worth of antibiotics as what the doctor calls a “maintenance” dose. So far, they’re mostly doing the job.A couple of weeks ago I turned 64 years old and as a present to myself I bought a copy of Nick Redfern’s book Monster Files. (In the UK you can buy it here and in the USA here) As is usual with all of Nick’s books it was a really great read.In Chapter 15: Sasquatch, UFOs and the US Air Force, under the subtitle of: Opening the Dimensional Doorways, he writes about his discussion with Ronan Coghlan concerning Bigfoot. Ronan Coghlan is a famous Irish writer on the topic of, amongst other things, Fortean subjects.

For the first time ever, a study to determine how connected UK children are to nature has been carried out.
A three-year research project, undertaken by the RSPB, found that only 21% of children in the UK have a level of connection to nature that can be considered ‘realistic and achievable’ for all children [see editors’ notes 1]. The report’s findings will be released at an event at the Houses of Parliament tonight [16 October].

The report comes as a result of growing concerns over generations of children with little or no contact with the natural world and wildlife, which the RSPB believes is one of the biggest threats to UK nature.

The new study shows there are statistically significant differences between children’s connection to nature at a national level across the UK, as well as between boys and girls, and British urban and rural homes [see editors’ notes 1].

In May, 25 wildlife organisations, including the RSPB, released the groundbreaking State of Nature report [see editors’ notes 2], which revealed 60 per cent of the wildlife species studied have declined over recent decades. The charity believes that ensuring young people are connected to nature will mean they develop deeply-held feelings and attitudes towards wildlife and the world we all live in, and as a result will care enough to help save it in the future.

Dr Mike Clarke, RSPB Chief Executive, will address MPs at a reception tonight, where he will reveal the report’s findings and urge governments and local authorities to adopt this new approach.  He will say: “This report is ground-breaking stuff. Millions of people are increasingly worried that today's children have less contact with nature than ever before, but until now there has been no robust scientific attempt to measure and track connection to nature among children in the UK, which means the problem hasn’t been given the attention it deserves.

“Nature is in trouble, and children’s connection to nature is closely linked to this. The recent State of Nature report shows that nature in the UK is being lost at a dramatic rate. We can all take action to put nature back into childhood, to ensure young people have better lives and a better future.

“For the first time, we have created a baseline that we and others can use to measure just how connected to nature the UK’s children really are. By adopting this new approach, we can all monitor children’s connection and we are recommending that governments and local authorities take action to increase it through policy and practice decisions.”

Over the last decade, a large amount of research has been carried out into the diverse benefits for children of contact with nature and outdoor experiences. These benefits include positive impacts on education, physical health emotional wellbeing and personal and social skills.

Evidence about the impact of an inactive and indoors childhood has grown over the summer with the Chief Executive of the British Heart Foundation calling for a return to the ‘traditional outdoors childhood’ [see editors’ notes 3].

The RSPB believes everyone, from governments to organisations and individuals, has a role to play in connecting children to nature, which is why it has signed up to The Wild Network. The Wild Network is a unique and pioneering collaboration between organisations with an aim to let kids get back their ‘wild time’ and reverse the trend of children losing touch with the natural world and playing outdoors [see editors’ notes].

The kind support of the Calouste Gulbenkian Foundation and the University of Essex made this research possible.
Andrew Barnett, Director of the Calouste Gulbenkian Foundation in the UK, says: ‘We are delighted to have supported this groundbreaking study. Robust evidence of children’s connection with nature will be a powerful lever for change.’
Posted by Jon Downes at 12:00 PM No comments:

On this day in 1926 the legendary escapologist and un-masker of fraudulent mediums, Harry Houdini, gave his last performance.
And now the news:

A sound recording of Houdini 's introduction to his water torture escape:
http://www.youtube.com/watch?v=TUKyaji79zI