The controversial badger cull in England is set to fail for the second year running, with shooters far behind the required number of kills, according to Guardian sources. The six-week culls are due to end on Monday and environment secretary, Liz Truss, says the outcome will determine whether they are rolled out across the country in an attempt to curb rising tuberculosis in cattle. Over 26,000 TB-infected cattle were slaughtered in 2013.

But ministers have abolished independent expert analysis of the culls, a move being challenged by an ongoing legal battle. A leading badger expert said on Friday that the targets set for the latest culls were scientifically “rubbish”, meaning no conclusion would be able to be drawn from them. The most recent data obtained by the Guardian shows that, two-thirds of the way through the Gloucestershire cull, fewer than a third of the required badgers had been shot. A landmark 10-year trial showed that killing too few badgers actually increases TB in cattle as the disturbed badgers scatter.

In the other cull zone in Somerset, the Guardian understands the shooters are on track to meet the target set by the Department of Environment, Food and Rural Affairs (Defra). But Professor Rosie Woodroffe, a badger expert who worked on the 10-year trial, said: “The targets are all rubbish because they are based on rubbish data. In Somerset they set themselves an unbelievably easy target. It was not set in line with their aim – to kill at least 70% of badgers. They have completely thrown that out.”

Officials estimated the Somerset population by counting setts and multiplying by a fixed number, a method described as “very crude” by Prof Woodroffe. This estimate suggested the target should be between 316 and 1,776 badgers killed, with Defra choosing the lowest figure.

There is a 97.5% chance the cull will therefore fall short of the 70% mark, according to Prof Woodroffe. In Gloucestershire, the range was estimated as 391 to 1,292, with 615 being chosen as the target.
“Defra claim to take a precautionary approach to setting these targets. But killing too few badgers risks increasing cattle TB, quite the opposite of precautionary,” she said. “Furthermore, with the data that is being collected, it will be impossible to know how effective this year’s culls have been.”

Defra’s now-disbanded Independent Expert Panel (IEP) judged the 2013 culls to be neither effective or humane. “I wonder if the government no longer wants to know the answer to whether their ongoing pilot culls will deliver the required outcome,” said IEP member, Prof Tim Coulson at the University of Oxford, in June.

I'LL BE IN SCOTLAND BEFORE YE 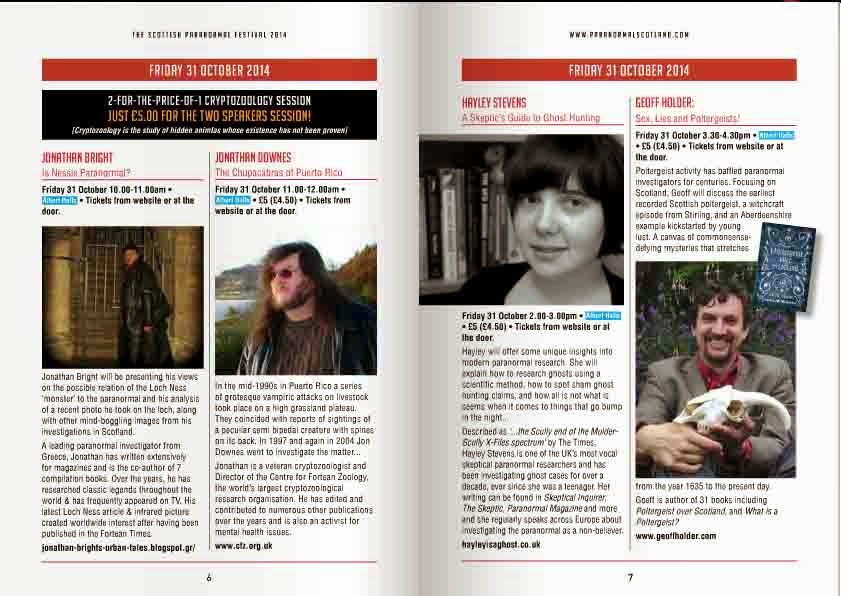 *  Jon Downes, the Editor of all these ventures (and several others) is an old hippy of 55 who - together with an infantile orange cat named after a song by Frank Zappa puts it all together from a converted potato shed in a tumbledown cottage deep in rural Devon which he shares with various fish, and sometimes a small Indian frog. He is ably assisted by his lovely wife Corinna, his bulldog/boxer Prudence, his elderly mother-in-law, and a motley collection of social malcontents. Plus.. did we mention the infantile orange cat?
Posted by Jon Downes at 2:13 PM No comments: 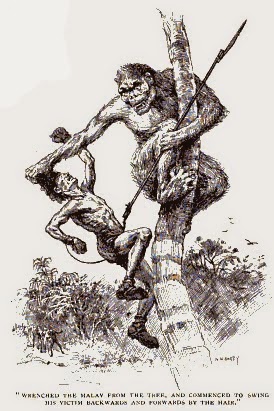 Nessie talk for festival of paranormal

Herald Scotland
A PARANORMAL investigator who claims to have captured the first infrared image of the Loch Ness Monster will lead a talk on the mythical creature at ...

Paranormal investigator to revisit Nessie hunt
Aberdeen Press and Journal
He will be explaining his theories on the legendary monster during a ... “Maybe the monster will put in a special appearance at Loch Ness to mark this ...
Posted by Jon Downes at 12:00 PM No comments:

Do you see a Bigfoot in this photograph?

blogspot.com
Bigfoot Evidence. World's Only 24/7 Bigfoot News Blog: Encouraging readers to draw their own conclusions from the evidence ... The face of Bigfoot

Show details
tivo.com
The Gulf Coast Bigfoot Research Organization responds to a call that a rogue Bigfoot is attacking a woman's farm animals; a hunter claims his foot was ...

Bigfoot Round-Up Brings Sasquatch Skeptics to Washington
HC Media Online
In honor of Bigfoot believers Bob Gimlin and the late Roger Patterson, an event is being held at the Yakima Valley Museum in Yakima, Washington

Hunter Gets Terrified by Bigfoot in this Hotspot
blogspot.com
All this guy comes up with are stories of a Bigfoot driving some redneck out of the back country. No wonder both his and his wife's sphincter muscles ...

Dr. Jeff Meldrum Speaking at the Yakima Bigfoot Round-Up (Video)
Before It's News
Dr. Jeff Meldrum is a pillar of the Bigfoot community. The man has worked tirelessly on studying tracks and Bigfoot as a whole. Jeff was one of the key

Are All These Monster Hunting Shows Helping or Hurting Cryptozoology?
blogspot.com
Whether it's Finding Bigfoot, Alaska Monsters, or Monsters Underground, television networks have realized there's money to be made in the search for ...

New 'sightings' in Queensland of the mythical Yowie have sparked a spat between rival hunters
Courier Mail
Brisbane mates Jason Heal and Jason Dunn claim to have captured clear footage of a bigfoot in a forest on the Gold Coast hinterland. Where Yowie ...

Look Into the Eye of the Siberian Bigfoot (Video)
Before It's News
The Siberian Sasquatch is still being heavily debated. YouTube user Syndactylus7 shows us a closer look at what might be the eye and face of the

Bigfoot Caught Filmed By Snowboarder Breakdown (Video)
Before It's News
Is it a bear? Is it a tree? Is it a guy talking to a man about a horse? We don't know what it is, but let's find out what ParaBreakdown says as he gives us ...

Bigfoot in Ohio?
blogspot.com
The person who filmed this footage thinks it's a Bigfoot. He says if it's a costume, it's a damn good costume. Well. To be honest, it's just a blur to us
Posted by Jon Downes at 11:44 AM No comments:

ON THIS DAY IN 1952 - The Mau Mau uprising against white settlers began in Kenya.


AND TO WHISTLE WHILE YOU WORK... (Music that may have some relevance to items also on this page, or may just reflect my mood on the day)
Posted by Jon Downes at 1:34 AM No comments: