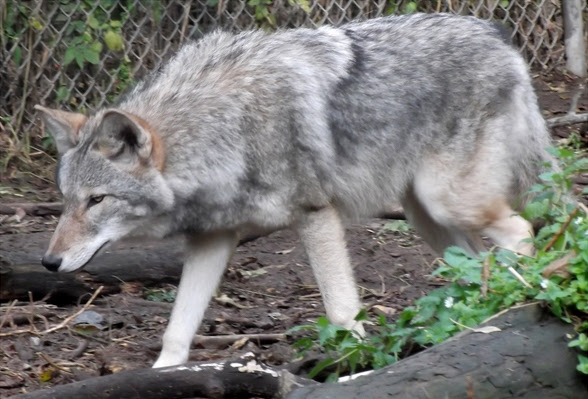 Posted by Andrew May at 4:19 PM No comments:

THE WEIRD WEEKEND PUBLICITY MACHINE FINALLY JUDDERS INTO ACTION FOR 2015 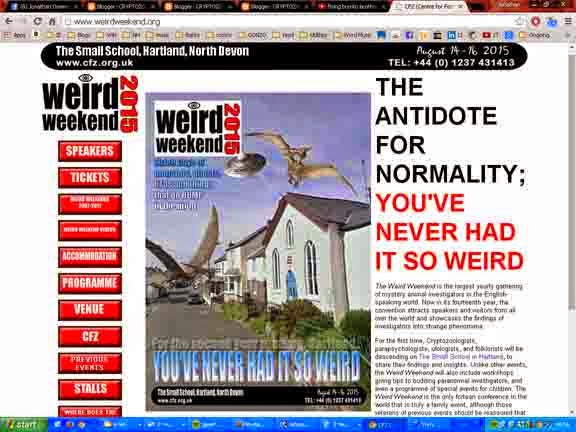 The Weird Weekend website is now updates with details of this year's event. Check it out at www.weirdweekend.org

Posted by Jon Downes at 2:41 PM No comments:

www.gonzomultimedia.co.uk/about.html
I am sorry that the blogs are later than usual today, but I had a doctor's appointment. It appears that I am showing the early signs of what may be Parkinson's Disease. My father had it, and I believe that my grandfather had it, so it is logical that I may be susceptible. I have been referred to a neurologist, and I have no intention of panicking until I have to. In the meantime, I think I may have to record a cover version of this:
https://www.youtube.com/watch?v=xWgxjc7kv3Q
In more cheerful news, yesterday we finally upgraded the Weird Weekend site with the details of this year's event. Tickets are now on sale and a provisional programme has also been posted. Check out www.weirdweekend.org.
THE GONZO TRACK OF THE DAY: Giles,Giles & Fripp featuring Judy Dyble
http://gonzo-multimedia.blogspot.co.uk/2015/03/currently-available-from-gonzo-flow-and.html
THOM THE WORLD POET: The Daily Poem
http://gonzo-multimedia.blogspot.co.uk/2015/03/thom-world-poet-daily-poem_9.html
A review of the recent dvd-a release of Rick Wakeman
http://gonzo-multimedia.blogspot.co.uk/2015/03/a-review-of-recent-dvd-release-of-rick.html
Crass's Steve Ignorant Lines Up UK Shows
http://gonzo-multimedia.blogspot.co.uk/2015/03/crasss-steve-ignorant-lines-up-uk-shows.html
A universe of inspiration for space rockers Hawkwind
http://gonzo-multimedia.blogspot.co.uk/2015/03/a-universe-of-inspiration-for-space.html
The Gonzo Weekly #120
www.gonzoweekly.com
Frank Zappa, Ant-Bee, Rick Wakeman, Hawkwind, Daevid Allen, Jon Anderson, Spurious Transients and Yes fans had better look out!
The latest issue of Gonzo Weekly (#120) is longer than ever at 96 pages and is be available to read at www.gonzoweekly.com, and to download at http://www.gonzoweekly.com/pdf/. It has Frank Zappa on the front cover with an interview with Billy James about his relationship with FZ inside. Despite the fact that I said I would never do a themed issue of this magazine, we carry on the Frank Zappa theme with looks at biographies of the man, a critique of the new documentary DVD featuring FZ from 1969-1973, and exclusive experpts from the new Frank Zappa book out on Gonzo. But its not all FZ this issue. Graham goes to see Hawkwind in Warrington with exclusive words and pix, Doug Harr reports on Rick Wakeman's King Arthur reissues, and we send Gavin from Spurious Transients to a Desert Island. Neil Nixon reports on an even stgranger album than usual, Wyrd goes acoustic and Xtul gets freakier than ever. And there are radio shows from Strange Fruit and from M Destiny at Friday Night Progressive, and the titular submarine dwellers are still lost at sea, although I have been assured that they will hit land again soon. There is also a collection of more news, reviews, views, interviews and pademelons trying to choose (OK, nothing to do with small marsupials having difficulty in making choices, but I got carried away with things that rhymed with OOOOS) than you can shake a stick at. And the best part is IT's ABSOLUTELY FREE!!!
This issue features: Frank Zappa, Jack White, Don McLean, Joan Baez, Passenger, Matt Johnson, Paul McCartney, Daevid Allen, Gong, Marillion, Ian Mosley, Strange Fruit, Friday Night Progressive, Patrick Whitefield, Jim McCann, Wilhelm Rottger, Tommy James, Mick Abrahams, Firemerchants, Dee Palmer, Atkins May Project, Wagner, Hawkwind, Karnataka, Paul Buff, Frank Zappa, Charli XCX, Garth Brooks, 5 Seconds of Summer, Ed Sheeran, Billy James, Gavin Lloyd Wilson, Spurious Transients, Focus, Hawkwind, Yes, Peter Banks, Alan White, Rick Wakeman, Chris Squire, Steve Howe, Bill Bruford, Tony Kaye, Xtul, Mamma cass Eliot, Elvis, Syd Barrett, Pink Floyd, Led Zeppelin, 1D,  Lady Gaga, Neil Nixon, Todd Rundgren, Nosdrama, Riverland, Children of Bodom, Jaldaboath

* The Gonzo Daily is a two way process. If you have any news or want to write for us, please contact me at jon@eclipse.co.uk. If you are an artist and want to showcase your work, or even just say hello please write to me at gonzo@cfz.org.uk. Please copy, paste and spread the word about this magazine as widely as possible. We need people to read us in order to grow, and as soon as it is viable we shall be invading more traditional magaziney areas. Join in the fun, spread the word, and maybe if we all chant loud enough we CAN stop it raining. See you tomorrow...
* The Gonzo Daily is - as the name implies - a daily online magazine (mostly) about artists connected to the Gonzo Multimedia group of companies. But it also has other stuff as and when the editor feels like it. The same team also do a weekly newsletter called - imaginatively - The Gonzo Weekly. Find out about it at this link: www.gonzo-multimedia.blogspot.com/…/all-gonzo-news-wots-fit…
* We should probably mention here, that some of our posts are links to things we have found on the internet that we think are of interest. We are not responsible for spelling or factual errors in other people's websites. Honest guv!
* Jon Downes, the Editor of all these ventures (and several others) is an old hippy of 55 who - together with an infantile orange cat named after a song by Frank Zappa puts it all together from a converted potato shed in a tumbledown cottage deep in rural Devon which he shares with various fish, and sometimes a small Indian frog. He is ably assisted by his lovely wife Corinna, his bulldog/boxer Prudence, his elderly mother-in-law, and a motley collection of social malcontents. Plus.. did we mention the infantile orange cat?
Posted by Jon Downes at 2:36 PM No comments:

Does Bigfoot Live In a Group?
Bigfoot Evidence - Blogger
The occasional dog that will go up to a bigfoot is in danger of being killed, ... Does anyone really have a basis for which to speak fact about bigfoot?

Bigfoot Screams In Yosemite Comparison - Can You Identify These Calls?
Bigfoot Evidence - Blogger
ParaBreakdown makes a comparison of two different recording of possible bigfoot calls. They do sound pretty similar. Can you identify these sounds?

I Cannot Explains This PEI Bigfoot Sighting (Video)
Before It's News
... ran across the clearing and then disappeared into the woods. Bigfoot sighting in Prince Edward Island, east coast of Canada,” wrote the witness.

Bigfoot or Bear? I'm so confused!
Bigfoot Evidence - Blogger
Can you help identify this animal from the picture shown here? It is unclear if this is an unverified picture of a “Bigfoot.” It was recently discovered on

Check Out This Bigfoot Sighting Report From A Famous Sighting Area
Bigfoot Evidence - Blogger
YouTube user Prehistoric Bone Hunter talks about an amazing bigfoot sighting he had while researching in North Carolina. The interesting thing is it ...

BIGFOOT? I saw and smelled it too!
Watertown - Craigslist
Sad to say there is a real BIGFOOT in Watertown New York. So how do we get the States foot out of our backside? Its up in there really deep. I smell

Human-Bigfoot Hybrid
Sasquatch Chronicles
No doubt some of you have seen this video before, but I still enjoy studying it. The story is the man's mother was abducted and repeatedly raped by a ...

ON THIS DAY IN 1796 - Napoleon Bonaparte and Josephine de Beauharnais were married. They were divorced in 1809.
And now some more recent news from the CFZ Newsdesk


AND TO WHISTLE WHILE YOU WORK... (Music that may have some relevance to items also on this page, or may just reflect my mood on the day)
Posted by Jon Downes at 8:55 AM No comments: