A couple of days ago Swedish and Danish newspapers were full of a story about how a raid by the Swedish police on a house in the outskirts of the city of Malmö in southern Sweden had yielded among other things a 2 meter long Nile crocodile stomping around in a greenhouse, and a similar sized, although dead reptile in a freezer in the basement. When asked about the crocodiles, the wife of a man suspected of running a major rencing operation, commented rather wistfully, that the crocodiles had been a gift to her husband, and that she was mighty tired of them, as she had hoped to use the greenhouse for other purposes. Having searched the premises, the police left with a number of suspected stolen items, but left the crocodile in the greenhouse for the time being. When asked about it, local police admitted they were at a loss, as to what should be done with the reptile.

Email ThisBlogThis!Share to TwitterShare to FacebookShare to Pinterest
Labels: lars thomas, The Cryptodane

Posted by Jon Downes at 3:43 PM No comments:

Crazy golfers can complete 'nein' holes with a difference - by playing on this course which includes a model of Adolf Hitler.

The exhibition crazy golf course features a large model of the Fuhrer, and players have to knock a ball into a tunnel and under the Nazi leader's belt.
The Hitler model even raises its arm in a Nazi salute and shouts 'nein nein nein' when the ball passes underneath.
The Hitler golf hole is part of a course which also features a mini statue of Saddam Hussein - which topples over when a ball drops into the hole.
The course was designed by a group of British artists, who describe the controversial design as 'crazy golf with a difference'.
It is thought the artists made the Hitler model themselves, which is currently on display at the Arnolfini art gallery in Bristol.

Ladies and Gentlemen, have you heard of Flying Saucers? Yes,obviously,if you are the kind of person who`d read this kind of a blog.Well now you`re about to read about Flying Cups.

According to the Aberdare Times of 7th January 1888 the phenomenon of Flying Silver once took place in , or rather, flying cups. Read on:

“FLYING SILVER”. The Chinese paper prints the following paragraph. It is said that in ancient times the people saw silver cups floating in the air, and this fabulous story is still believed in certain parts of the empire. A reporter from writes to tell us of a strange phenomenon which confirms the old fictitious story. On the day previous to the festival of the eighth moon [Mid-Autumn Festival - R] , a large number of people witnessed at sunset a flock of birds resembling silver cups, with the sound of ringing silver bells, flying at a great height, from west to east, the reflection of the sun`s rays on them being so dazzling as to blind the onlookers eyes. Many believed this must be the legendary flying silver cups because it answered to the ancient (word unclear.) We are a bit sceptical of this incredible story but if the writer had truly seen it with his own eyes, it might be possible because “strange wonders unintelligible to our feeble understanding do sometimes (?) this world” (1) 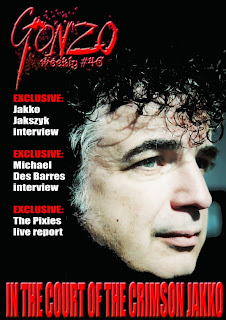 GONZO WEEKLY #46 IS OUT
The biggest music news in the world this week has to be that Beyonce paid tribute to her maternal grandparents, but the biggest item of music news that I give a damn about is that Robert Fripp has decided to turn his back upon retirement and has announced a new line-up of King Crimson for next year. This line-up is particularly challenging and experimental because it has three drummers. It also has Jakko, the bloke who composed that twiddly piece of music that you hear at the beginning of each Gonzo podcast as lead singer and guitarist, and so we are particularly proud to be bringing you his take on this all later in this issue.

We also have a particularly interesting interview with the charming and multi-talented Michael Des Barres about his latest activities, and - if you haven't done so already - I do implore you to go and buy his remarkably groovy latest album. He also has a new Facebook page for his radio shows. Check it out!

Thank you once again to Rob Ayling, the Gonzo grande fromage for allowing me the chance to do something as insane as this magazine, and above all a big thank you to YOU, the readers, for having borne out my assertion that there are indeed people who listen to both Crass and Fairport Convention and like everything from Prog Metal to Folk to Punk to Avant Garde noise. Frunobulax and I are truly not alone.

Check out this issue
http://eepurl.com/GmbbT

Or, even better, make an old hippy really happy and subscribe here (it truly is free)
http://eepurl.com/r-VTD
Posted by Jon Downes at 12:25 PM No comments:

BRIAN MAY WITH THE BADGER CAMPAIGNERS

I'm in the War Zone of the Badger Cull in Somerset with the wounded badger patrols.
Talking to the farmer who has given his land over to Camp Badger. He says "The cull is a waste of time and everybody down here knows it." He says "We do not own these lands - we are custodians, and it's our duty to protect wildlife - not kill it." This farmer also says the NFU doesn't represent the farming community. They're just trying to make a name for themselves.

Moving around fields here in the cull zone astonishing how few cows there are. However there are pheasant farms everywhere - real motives ?

Meeting the wounded badger patrol guys and sabs - what a wonderful bunch of decent people. I'm reminded that the likes of the Daily Mail have long deliberately blackened reputations of peaceful people dedicated to animal protection. Down here in Somerset in bloody badger cull zone, going out into the night, a kind of miracle is happening. Dozens of small groups appearing. In cull zone, I'm overwhelmed - good folks from far and wide give up their nights just to walk the footpaths. Their presence stops shooters

Today one found dead badger was collected by the RSPCA as we arrived. Not known yet how it died. It's brutal - and the secrecy is sinister. A dead badger found yesterday had crawled off to die. DEFRA said it was miles outside the cull zone, But the man who shot it said within zone.

Obviously DEFRA and NFU have a lot to hide here. Or else why all the secrecy ? Is this really England in 2013 ?

*  Jon Downes, the Editor of all these ventures (and several others) is an old hippy of 54 who - together with his orange cat (who is currently on sick leave in Staffordshire) and two very small kittens (one of whom is also orange) puts it all together from a converted potato shed in a tumbledown cottage deep in rural Devon which he shares with various fish. He is ably assisted by his lovely wife Corinna, his bulldog/boxer Prudence, his elderly mother-in-law, and a motley collection of social malcontents. Plus.. did we mention the orange cat?
Posted by Jon Downes at 10:37 AM No comments:

On this day in 2007 explorer Jason Lewis completed the first entirely human powered circumnavigation of the world. It was quite the adventure, you can read about it here: http://en.wikipedia.org/wiki/Jason_Lewis_%28adventurer%29

A predictable, but good, choice of song here:


http://www.youtube.com/watch?v=s9MszVE7aR4
Posted by Jon Downes at 1:36 AM No comments: