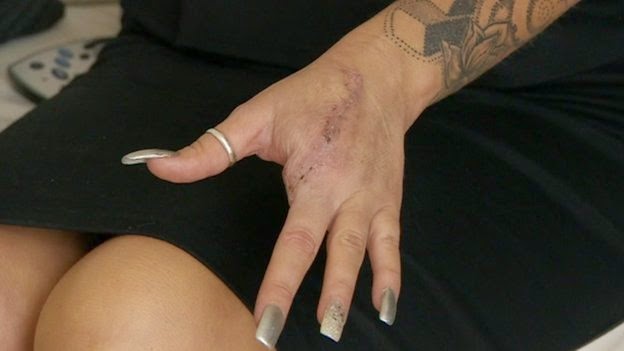 Have you seen this?

A woman has had a finger amputated - and told she was within hours of death - after being bitten by a false widow spider. 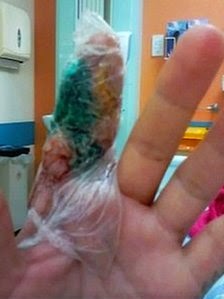 Andrea Wallace, from Seaham, County Durham, was bitten in a Sunderland park and described the result as "like something out of a horror movie".

The attack left her with flesh-eating bug necrotising fasciitis, which required 10 weeks in hospital.

False widows are the UK's most venomous spider but extreme reactions are rare.
There have been no reported deaths from its bites in the UK and it is understood the spider which bit Ms Wallace contained a bacteria which caused the reaction.

Within an hour of arrival at Sunderland Royal Hospital, Ms Wallace went into surgery as doctors tried to prevent the poison spreading through her body.

She was later transferred to the University Hospital of North Durham.

The hairdresser said: "The pain was like nothing I've been through in my life.

"By the time I got to hospital my finger was bursting open, there was pus, it was black. It was a right mess."

"They told me if I had been two hours later I would have been dead. It was scary.

"It was like something out of a horror movie."

Doctors attempted to construct a "false finger" but eventually had to amputate.

The mother-of-four has been left with a six-inch scar, but she said: "Losing my finger was a small price to pay.

Posted by Jon Downes at 5:08 PM No comments:

Posted by Jon Downes at 2:32 AM No comments:

THE GONZO BLOG DOO-DAH MAN VANISHES LIKE THE WIND

*  Jon Downes, the Editor of all these ventures (and several others) is an old hippy of 54 who - together with an infantile orange cat named after a song by Frank Zappa puts it all together from a converted potato shed in a tumbledown cottage deep in rural Devon which he shares with various fish, and sometimes a small Indian frog. He is ably assisted by his lovely wife Corinna, his bulldog/boxer Prudence, his elderly mother-in-law, and a motley collection of social malcontents. Plus.. did we mention the infantile orange cat?
Posted by Jon Downes at 1:55 AM No comments:

The black pinesnake found in Mississippi and Alabama suffers from
population loss caused by habitat degradation, fire suppression
activities, road kills and intentional killing by humans. The West
Coast population of the fisher, commonly known as a type of weasel,
is threatened from habitat loss, rodent-killing pesticides and wildfires.

The Center for Biological Diversity petitioned listing both species.

Click here to view the Federal Register notice for the black pinesnake:
https://www.federalregister.gov/articles/2014/10/07/2014-23673/endangered-and-threatened-wildlife-and-plants-threatened-species-status-for-black-pinesnake

Posted by Jon Downes at 1:26 AM No comments:

ON THIS DAY IN 1492 - Christopher Columbus, an Italian explorer, sighted Watling Island in the Bahamas. He believed that he had found Asia while attempting to find a Western ocean route to India. The same day he claimed the land for Isabella and Ferdinand of Spain.