Englishman Shaun Histed-Todd is a photographer and digital illustrator, and I am sure you will find his work very interesting. He not only works on books but he also does CD artwork due to his strong bonds with music, as you will find out.

Scottie W. posted the following comment to Sunday's posting of another rather dubious video purporting to be of a wolf in Hackney.

For those of you too young or musically naive to know what he is on about:

Hell, I just wanted an excuse to post some Warren Zevon....
Posted by Jon Downes at 2:23 PM 1 comment: 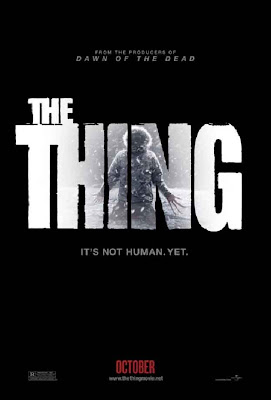 When I first heard a new version of The Thing was being considered I began to despair as this was right in the middle of Hollywood’s current trend to remake everything they can as badly as possible (A Nightmare On Elm Street and Friday The 13th to name a recent few). Then rumours began to circulate that this was actually going to be a prequel centred on what occurred at the Norwegian Base and be pretty faithful to the original. My interest went up a notch but I still had my doubts. After waiting over a year, The Thing (2011) has been released, and all I can say is it has been worth the wait and my sincerest apologies for the doubts!

The plot centres around a group of scientists at a Norwegian Antarctic Base who stumble across a monumental discovery: an extraterrestrial spacecraft buried in the ice with its owner lying frozen not too far away. After bringing in a specialist graduate student to help with the discovery, the team manage to retrieve the extraterrestrial from the ice and take it back to their base for analysis. Little do they know that the alien organism is still very much alive and able to mimic the things it comes into contact with….

The original 1982 John Carpenter film by the same name (although a box office flop) is now a cult classic and so any film associated with this original masterpiece would have to equal or better it. Thankfully, director Mattijs van Heijningen Jr did just that!
Being a prequel, the film is limited on where it can go and what it can do without breaking any of the rules that are established in the original but this is done to perfection. The set pieces are stunning (and tie in with the original perfectly) and the acting is just as good. The plot allows you to see things go from bad to worse without losing any momentum, and the atmosphere created is just as good as in the original with a few jumpy moments thrown in as well. From the start of the film, you get the feeling that the director and screenwriters are fans of the original. They have done everything they can to tie this film in with the original to create a seamless link between the two (everything from the bloodied axe in the wall to the how the two-faced Thing came about is created) to such an extent that the end credits are the start of the original.
My only (minor) negative about the film is the use of CGI instead of animatronics. Although this does add another dimension to the film, allowing the Thing to be seen in all its gruesome glory, the original was so special to me because you could see there was something there for the characters to interact with rather than them responding to something that will be digitally added later on. However, this is only a minor point and doesn’t detract from the film in any way.

For those who have seen the original, you know how this film is going to end right from the start and this may seem like a negative point, but it’s the journey of how you get to the start of the original that makes this film as good as the 1982 film. This is definitely a film to see on the big screen and one to add to your collection when it is released next year. 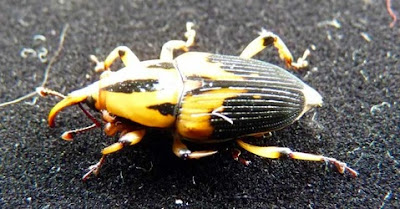 I live in Panama and have a big garden with around 200 species of
heliconias. Our co-ordinates are around 8.5 and -82.5 and the elevation is 1400 metres.

Just recently we have begun to notice the weevil in the attached photos
boring into the stems of heliconias. The bright yellow weevil is about 1.5 cm long. The othe 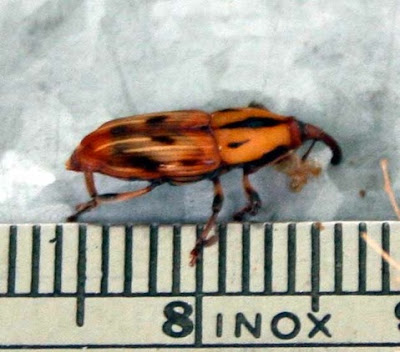 r picture is an
immature weevil, just over 1 cm.

I have searched Google for a few days; both the web and the image
search features. I have also tried some bug key but so far no luck.
Any help appreciated.

On this day in 1993 production began on the Three Gorges Dam in China, which would contribute to the extinction of the Chinese river dolphin (see yesterday’s YNT).
And now the news:

The Three Gorges Dam in all its glory as the world’s largest hydroelectric dam:
http://www.youtube.com/watch?v=FUo8hrA0CEU
Posted by Jon Downes at 12:31 PM No comments: 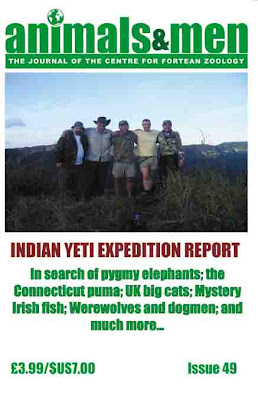 This issue of A&M seems to have been jinxed: every conceivable thing that could go wrong with it has gone wrong with it, and now we are in the embarrassing position of having it on sale on Amazon before we have actually received our copies to send out.

I sincerely hope that they will be dispatched before or soon after Christmas and - I PROMISE - regularising its output is the #1 priority for next year.

On a similar subject, The Journal of Cryptozoology is also late. This is because there are not enough hours in the day to do all the things that we want to do, and not enough people to do them.

Karl Shuker and I are both confident that this too will be underway in the New Year, as will Karl's new book, new books from Nick Redfern, Andrew Gable, Mike Hallowell and others, as well as even more new series and imprints from CFZ Press. 2012 really does look like it will be an exciting year....
Posted by Jon Downes at 12:17 PM 2 comments:

After a week's delay and almost a complete rewrite when the original material was lost one morning, the current blog posting on The Bionic Woman (Women) is up. There is more to this than you might think!