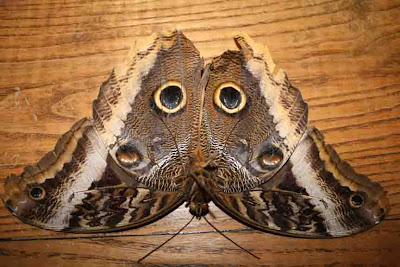 Caligo sp.
How about this for Batesian mimicry!

Although, a fairly recent study has cast some doubt on this theory with researchers claiming that its not the recognition of eyes that deters depredation but the conspicuous contrast in the patterns on the wings startling the would be attacker. (Stevens et al. 2008).

What do you think?

Posted by Jon Downes at 5:32 PM No comments:

New at the Frontiers of Zoology:
http://frontiersofzoology.blogspot.com/2012/04/news-item-new-mokele-mbembe-expedition.html

And Benny has two new blog entries up also:
http://benny-drinnon.blogspot.com/2012/04/dorothy-granger.html

Tyler Stone also has a link concerning "Yetis"
http://cryptoanimals.blogspot.com/2012/04/pongo-hooijeri-possible-candidate-for.html
Posted by Jon Downes at 2:06 AM No comments:

Posted by Jon Downes at 2:04 AM No comments:

On this day in 2002 the last successful telemetry was received from Pioneer 10.

Posted by Jon Downes at 2:04 AM No comments:

Back on the chain gang, the Gonzo Blog thunders into life on a friday morning.

First up is part one of an exclusive interview with Judge Smith, who amongst other things was a founder member of Van Der Graaf Generator, and composer of a radical and massively entertaining series of 'song stories':http://gonzo-multimedia.blogspot.com/2012/04/exclusive-judge-smith-interview-part.html

I also have an excuse to wax lyrical about one of my favourite musical heroes; Eric Burdon. This comes complete with an exclusive slice out of the 'Lost Broadcasts' DVD which features a 1970 session filmed with multiracial band 'War'. Bloody hell its good:
http://gonzo-multimedia.blogspot.com/2012/04/eric-burdon-tony-palmer-and-me.html

We have a peek at the new Anthony Phillips album:
http://gonzo-multimedia.blogspot.com/2012/04/new-anthony-phillips-album.html

A look at Martin Stephenson then and now:
http://gonzo-multimedia.blogspot.com/2012/04/two-faces-of-martin-stephenson.html

And a link to a massively subjective list of 100 albums that every sci-fi and fantasy buff should own:
http://gonzo-multimedia.blogspot.com/2012/04/link-100-albums-every-science-fiction.html

That's it for today, but I do suggest that you all check out Jack White's first solo album 'Blunderbuss'. It really is astounding, and fulfills the promise that he has hinted at with his work with 'The White Stripes', 'The Raconteurs', 'The Dead Weather' and all the other side projects that I have forgotten! The weekend starts, umm.... here, I suppose.
Posted by Jon Downes at 2:04 AM No comments:

KARL SHUKER: WAS THE IZCUINTLIPOTZOTLI A CANINE QUASIMODO?

Sometimes, tragically, by the time that a cryptid attracts mainstream scientific attention, it is too late - the creature in question has already become extinct. Certainly, for example, it may be too late to secure a specimen of a still-unidentified creature formerly reported from Mexico - the unpronounceable izcuintlipotzotli - because it has not been reported for more than 150 years.