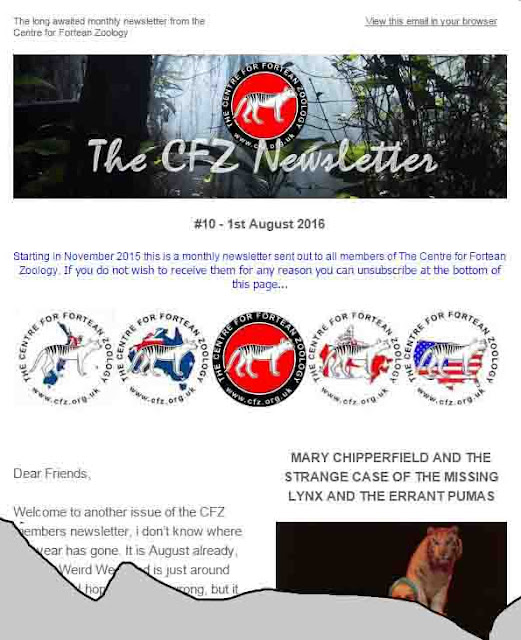 
For those of you not in the know, at the beginning of each month we send out a newsletter to all members of the CFZ. The most recent (which went out yesterday) included articles on British beavers, a 19th Century Fortean emtomologist, recent out of place whales, Notes and Queries etc.

The infrastructure of the Centre for Fortean Zoology has changed rapidly over the last few years and truthfully doesn’t look like its going to stop changing anytime soon. The newsletter costs a quid a month (or the equivalent in your currency) and is delivered straight into your inbox by a plethora of tiny invisible elves, or email if your prefer it that way. You can sign up for it: http://tinyurl.com/jz66jgh

CFZ IN THE NEWS: Weird Weekend in the North Devon Journal 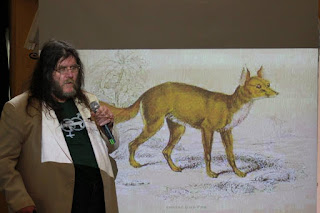 FOR the seventeenth year running devotees of the weird and wonderful will be descending on North Devon for the Weird Weekend.

This annual event is a fundraiser for the Centre for Fortean Zoology, the world's largest organisation dedicated to cryptozoology - the scientific search for mystery animals.Read on...
Posted by Jon Downes at 2:54 PM No comments:

Bigfoot Evidence
Bigfooter Nathan Reo of Utah has extended an open invite to anyone who would like to join him, as he leads you directly to some bigfoot habitats in ...

Bigfoot Evidence
“As we approached Sepulga River, we saw a moving figure run straight across the bridge in front of us,” the witness said. “For a split second, I thought ...

ON THIS DAY IN - 1834 - Slavery was outlawed in the British empire with an emancipation bill.
And now some more recent news from the CFZ Newsdesk