Ootsa Lake is part of the Nechako Reservoir system in British Columbia Canada.It is the largest of the original lakes to be part of the reservoir and sometimes it is referred to as the Ootsa Reservoir. In the Pleistocene Era, ice movement left grooves and ridges in the landscape forming lakes when the ice melted. Ootsa lake is one of these lakes and is popular for fishing having stocks of large rainbow trout and char. The waters of the lake are said to be cold and deep, some say up to 1000 feet deep(approx 333 metres) .There is a local legend/ story of a monster in Ootsa Lake. Several newspapers claim it has been spotted this week:

The last thing Darlene Thompkins expected to see on her holiday was something she referred to as the 'Ootsa Lake monster'.Thompkins who is holidaying in Burns Lake with her family from Edmonton, said she named the mysterious sighting in Ootsa Lake a monster because she didn't know what else to call it.Thompkins and her daughter were wading in the water near the Ootsa Lake spillway last week, while her husband George sat on the shore."A plane flew over and we watched that go by, it looked like the pilot was doing some sort of training exercise, then when we looked back down there was a big wave in the water," she said.Thompkins said the wave struck her as being unusual at the time so she watched the large ripple in the water about eight to 10 metres from where she and her daughter we standing.Thompkins then said she and her daughter saw a head appear out of the water."It looked like a huge snake head ,,, and it was a dark grey colour," she said."I called out to my husband to come and look, but he said to come out of the water and was a little scared. I didn't think about being scared because I was trying to see what it was, I grabbed my video camera and recorded but I was in a hurry and the focus was zoomed in so the footage is blurry," she said.Thompkins then grabbed a camera to take a picture of the creature and snapped a shot."It looks further away in the photo that what it was .... we saw it much closer," she said."We saw it twice, then another one came up beside it and a third one came too," said Thompkins adding that the creatures were very long like a snake."You could see the head while they were swimming along then further back there was another part of it - like a hump .... I can't stop thinking about what we saw and wondering what it was," she added."My uncle said it was probably a sturgeon, but this creature was swimming along with its head out of the water .... right up and out of the water .... and it was really big," she said."I wish I knew what it was, I have heard other people say they have seen something similar ..... these lakes are so big, you would never know what is living in them," she added.

When the lake was flooded lots of trees were covered by water. There is, according to the internet ,some sort of logging operation under way to retrieve the trees for commercial use. So could it just have been a log that surfaced? A dark grey head makes me think seal but I have no idea if seals would be found in those lakes. Perhaps some one else knows and can leave a comment. Again it is noted it is a glacial lake ,similar to many other lakes that have sightings. If they are not unknown creatures then something similar must happen at all these lakes to produce the effect of a monster in the water. Intriguing isn’t it?
Posted by Jon Downes at 12:14 PM 2 comments:

ANY IDEA WHAT THIS MOTH IS? 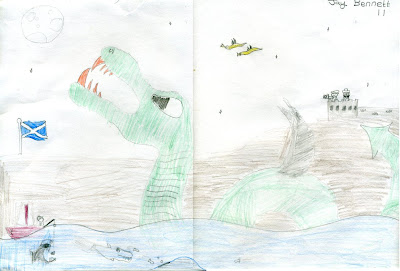 Lindsay Selby presented us with a magnificent `giggling Nessie` soft toy, which I knew that I had to get out of the house before one of my darling stepdaughters found it and made my life a misery by making it giggle continuously.


So we devised a Loch Ness Monster drawing competition which was won by Jay Bennett (top pic). Highly recommended is the one by Kieron Snape (middle) and the one at the bottom was by Oll who was only disqualified for being approximately 20 years outside the qualifying age group... 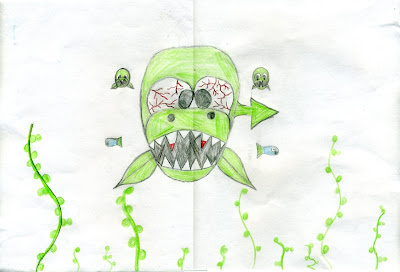 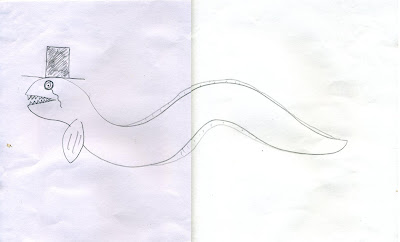 On this day in 1959 Jonathan Downes was born.
And now, the news:

Ah, the dirty monkey returns (he is truly a comic genius) :

http://www.youtube.com/watch?v=UXHwIrEpeSQ
Posted by Jon Downes at 11:34 AM No comments:

I DO, APPARENTLY OWE AN APOLOGY (and am very happy to give it)

At the Weird Weekend the hairs found at Huddisford Wood were not the only hairs to be tested and found to be a leopard. However, at the time I didn't realise this.

I wondered why David T thought that I was snubbing "Andrew Perry and his friends" over their research, and it was only yesterday that I realised what had happened. During the weekend I got a message from Lars that he had been given hair found "at another location" by Andrew Perry et al, and that it, too, had proved to have been from a leopard. At the time I assumed that the "other location" was simply somewhere else in Huddisford Woods, and although I made a mental note to congratulate them, I forgot completely about it. However, the hairs had not been found elsewhere at Huddisford, but came from Longleat Forest in Wiltshire.

Highland Tiger read about this on a blog by Wiltshire Phenomena Research who wrote, quite soberly on their blog:

"...a group of the people who were in the forest that day visited the Weird Weekend (hosted by the CFZ) where they met Lars Thomas who happened to be doing a talk on identifying hair. He kindly had a look at our hair on his microscopic machine to get a closer look at it and concluded (by comparing the hair on the screen to a book of different samples) that it was leopard hair, which is very exciting."

He actually compared the hair with a strand snipped out of Jon McGowan's leopardskin rug which is even better than using a book, but that is nitpicking. Neither Wiltshire Paranormal Research or Andrew Perry et al objected to the fact that I didn't congratulate them on stage. It was only our old friend Highland Tiger who rode into battle on their behalf and accused me of suppressing their findings. But as you probably are all aware by now, HT will find fault with everything and anything that I do.

I didn't suppress anything, because I didn't know anything about it, and had never heard of Wiltshire Paranormal Research. However, here, in a public forum I would like to say:

1. Congratulations guys. I am most impressed. Well done
2. If Wiltshire Paranormal Research would like to contact me they can have a free stall (like ASSAP) at next year's event
3. Andrew Perry has written a most gracious comment and both of us consider the matter closed.
4. HT has also accused me of snubbing Jon McGowan, who has also published about having found puma hair in Dorset. Again, nonsense. I think very highly of Jon both as a researcher and a friend. We are planning several collaborative ventures in the future, and the idea that I would somehow try to `bury` his findings is ludicrous.
Posted by Jon Downes at 11:05 AM 1 comment: