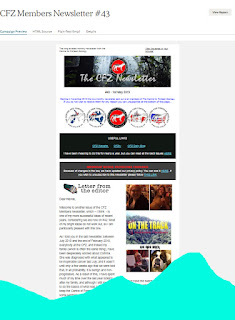 For those of you not in the know, at the beginning of each month we send out a newsletter to all members of the CFZ. The most recent (which went out a few minutes ago) included articles on OTT, changes at the CFZ, the way forward, a misgendered gorilla, aggressive chickens, Prudence,  Patreon, a new book on Scandinavian cryptozoology, my new novel and record, a new book on vampires, Notes and Queries etc.

The newsletter costs a quid a month (or the equivalent in your currency) and is delivered straight into your inbox by a plethora of tiny invisible elves, or email if you prefer it that way.

If you want to view a sample issue click here: http://tinyurl.com/pw7rw9l
Posted by Jon Downes at 1:12 PM No comments:

COUNCIL ATROCITY - Heads should roll, but |I bet they don't

Kent County Council has unwittingly destroyed a nationally important roadside nature reserve (RNR), home to tens of thousands of orchids, as it carried out drainage ditch clearance works.
Verges at Blue Bell Hill RNR, just north of Maidstone, were churned up by heavy vehicles working on the site, in some places down to the chalk.
Owned by Kent County Council, the verge has been managed by volunteers from Kent Wildlife Trust for 15 years. As well as 9,000 Pyramidal Orchids and nearly 8,000 Common Spotted Orchids, it was also home to Bee Orchids, the scarce Man Orchid and a wide range of other special chalk downland flowers. These attracted a host of pollinating bees, butterflies (20 species, including Chalkhill Blue) and other insects, which helped support a thriving population of small mammals as well as Common Lizards and Slow-worms.

A stark contrast: Blue Bell Hill RNR in summer 2018 and spring 2019 (Plantlife).
After removing some trees from the ditch, the council scraped the bank smooth. Such intensive works will inevitably mean that much of this wildlife is lost for good from the site; other species will take years to recover. At this time of year, the Common Spotted Orchids will have been beginning to show above ground, ahead of flowering from late May onward.
Dr Trevor Dines of Plantlife said: "I worry that I've become immune to 'bad stuff' happening to wild flowers over the years. But the destruction a few days ago of 17,000 orchids on a road verge in Kent proved that I'm not.
Read on...

Posted by Jon Downes at 7:00 AM No comments:

THE GONZO BLOG DOO-DAH MAN MIGHT AS WELL BE SOMEWHERE

Yeti Sighting in India: From Smallfoot to Ajooba Kudrat Ka, Here Are 5 Films That Revolved Around ...

LatestLY
In North American folklore, they are known as Bigfoot or Sasquatch. It is considered to be a large furry creature residing in the mountains. There have ...

Indian Army finds the abominable snowman in the Himalayas?

sbDirtySouthSoccer
However, in 2007, the Bigfoot Field Researchers Organisation had put forward some photos which they claimed showed a juvenile Bigfoot. Mumbai: ...

History of the Yeti: Does the Indian 'Bigfoot' or the 'Himalayan Legend' a real animal?

Times Now
The 'Abominable snowman' or the 'Yeti' is believed to be an ape-like creature taller than an average primate and human being. While the creature's ...
Yeti 'footprints' DISCOVERED by India military in Himalayas - pictures - Express.co.uk

Thrillist
... sighting of the elusive, mythical beast, which is known by other names like "bigfoot" and "abominable snowman" in various parts of the world.
Indian Army trolled for tweet about Yeti - Deccan Chronicle
Full Coverage
Indian Army mocked for Yeti 'footprints'
The Daily Star
“There's been lots of research done on Bigfoot/Yeti (including sighting/footprints) with none proving its existence,” he added. “Seriously disappointing ...
Yeti Footprints Found in Nepal Are Maybe (Definitely) From a Bear
The New York Times
The yeti is the mysterious cousin of Bigfoot, both part of the same extremely elusive family. They are part human and part creature — the best of both ...

Posted by Liv McCarthy at 6:30 AM No comments:

ON THIS DAY IN - 0408 - Theodosius II succeeded to the throne of Constantinople.
And now some more recent news from the CFZ Newsdesk