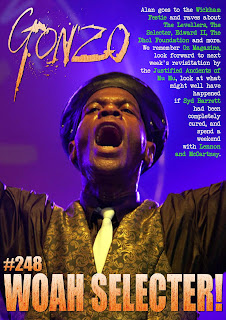 Gonzo Weekly #248
THE BY THE TIME WE GOT TO WICKHAM ISSUE
http://www.gonzoweekly.com/

In which Alan goes to the Wickham Festie and raves about The Levellers, The Selecter, Edward II, The Dhol Foundation and more. We remember Oz Magazine, look forward to next week’s revisitation by the Justified Ancients of Mu Mu, look at what might well have happened if Syd Barrett had been completely cured, and spend a weekend with Lennon and McCartney.

And there are radio shows from Mack Maloney, Strange Fruit, and Friday Night Progressive. We also have columns from all sorts of folk including Roy Weard, C J Stone, Mr Biffo, Neil Nixon and the irrepressible Corinna. There is also a collection of more news, reviews, views, interviews and antichinuses in primordial ooze (OK, nothing to do with small marsupials who have become time travellers and got stuck in a prehistoric swamp, but I got carried away with things that rhymed with OOOOS) than you can shake a stick at. And the best part is IT's ABSOLUTELY FREE!!!


SPECIAL NOTICE: If you, too, want to unleash the power of your inner rock journalist, and want to join a rapidly growing band of likewise minded weirdos please email me at jon@eclipse.co.uk The more the merrier really.
Posted by Jon Downes at 4:38 PM No comments:

THE GONZO BLOGGY HEN DOES WHAT?

ON THIS DAY IN - 1741 - Danish navigator Vitus Jonas Bering discovered Alaska.
And now some more recent news from the CFZ Newsdesk