The Armoured ground cricket Acantholpus discoidalis is considered a crop pest in the southern African countries of Botswana, Namibia and south Africa. When fully grown an adult of this flightless species may be three inches long and encased with thick armour plates and sharp barbs. They are defensive and have a rather painful bite. 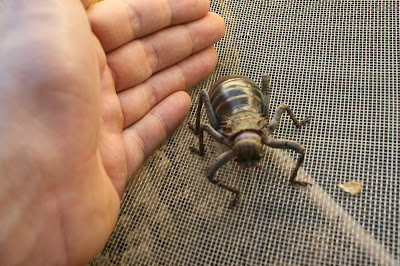 There are many other names attributed to this species including Armoured bush cricket, Corn cricket, Gobabis prawn, Endindi and Koringkriek. 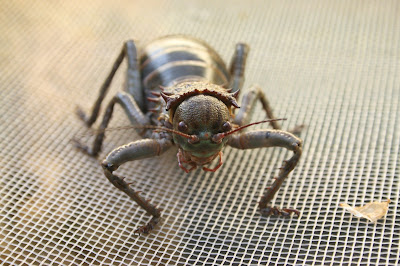 Armoured ground crickets have the bizarre ability to spray haemolymph (their blood) from their abdomens and this deters at least three species of lizard. When deprived of protein and salt A. discoidalis can become cannibalistic. The ability to autohaemorrhage also has a downside as this can encourage other individuals to attack and cannibalise them, this happens in captivity when kept in large groups!

A. discoidalis is a wonderful, albeit strange addition to the order Orthoptera and we at the Butterfly Farm are very pleased with our new colony.
Posted by Jon Downes at 12:16 PM No comments:

LARS THOMAS: It has already scared Richard Freeman, so there must be others out there who would like to be scared as well. 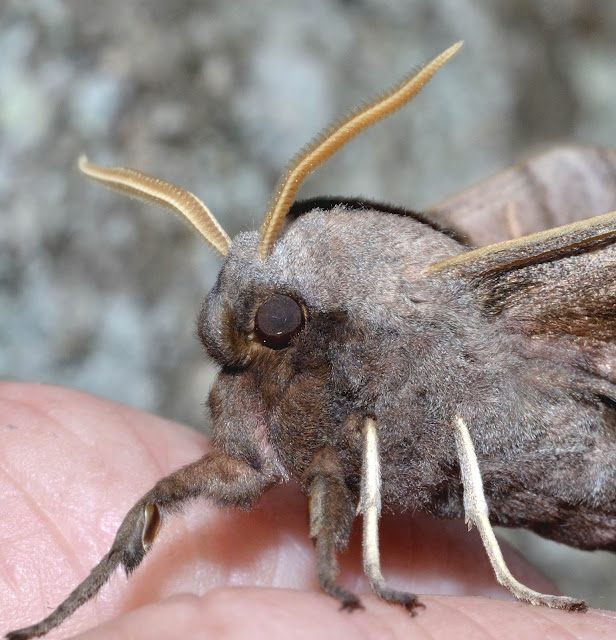 a little monster for the blog 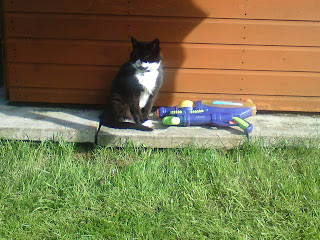 
The Sun was shinning and after hours of weeding, my garden was looking lovely. Rosie, Joanne and myself thought it would be a nice idea to get the garden furniture out of the shed and sit back, relax and enjoy a lovely afternoon. So out came the cobweb covered table and chairs followed by the parasol. With much puffing and panting I finally got the bugger up, only to discover some Field mouse had munched bloody great holes in it! Arrrgg! (Cue Tom and Jerry maid voice) “Samson, you no good cat!” “If you don't catch that darn mouse you'll be ouT, oUT, OUT of this house!”

So I have equipped Samson with the latest Mega Blaster Super Soaker 3000. Guaranteed to wash them mouses out of your houses!

Another week dawns, and it is damp and grey. We have quite a full day ahead of us because we are getting together all the equipment that Richard needs to take to Sumatra. Yes, he is off to Sumatra for the fifth time on the 25th June. We are filming a little piece later today during which he discusses his objectives for the trip. Weird Weekend tickets are selling consistently, but we can always sell a few more. This may end up being the last ever one, so buy your tickets early. I am starting work on next weekend's Gonzo magazine, and it is shaping up to be a real corker...

*  Jon Downes, the Editor of all these ventures (and several others) is an old hippy of 53 who - together with his orange cat (who is currently on sick leave in Staffordshire) and two very small kittens (one of whom is also orange) puts it all together from a converted potato shed in a tumbledown cottage deep in rural Devon which he shares with various fish, and sometimes a small Indian frog. He is ably assisted by his lovely wife Corinna, his bulldog/boxer Prudence, his elderly mother-in-law, and a motley collection of social malcontents. Plus.. did we mention the orange cat?
Posted by Jon Downes at 11:04 AM No comments:

On this day in 1987 the dusky seaside sparrow (Ammodramus maritimus nigrescens) was presumed extinct in the wild as the last known non-captive individual died.
And now the news:


An unrelated species of “sparrah”:
http://www.youtube.com/watch?v=fs4-lxrTK-8
Posted by Jon Downes at 11:03 AM No comments: