MELBA KETCHUM'S NOVEL HOMININS: And the beat goes on

And so the story continues. And it is not making very impressive reading. I haven't received an answer to my letter to DeNovo asking for access to their press room, and I still can't work out where to download the journal from, but it doesn't matter now because I have actually been sent a copy of the journal (albeit one of the press evaluation copies) from an anonymous source. (This is especially ironic as I was going to pay the $30).

My first impression was that the whole thing was appallingly badly laid out. It looks more like an amateur parish magazine than a scientific paper, but what about the contents?

I am a naturalist and a journalist, and although I am - by definition - a zoologist, in that I am a bloke who studies animals, I never went to University, and my technical knowledge is sadly lacking. So I passed copies of the journal over to two of my colleagues whose zoological chops are far more impressive than my own.

Now, before we go any further, I am not going to identify them. Why? Because as the provenance of the said pdf is a little dodgy, and I know next to nothing about American copyright law, I do not want to implicate the two zoologists (whom I shall call Zoologist #1 and Zoologist #2) in any criminal act which I amy or may not have been party to. We are NOT quoting any of the text, or posting pictures except for the front cover, so - as far as I am concerned - there should be no problems, but better safe than sorry.

I think their methodology looks weak at best, Just their description of the variation in the morphology of the hairs is enough to make me think they have been analysing hairs of several different species of animal mixed together. One of the photographs of the hairs looks distinctly human to me, whereas one of the others looks more like a bear. Apart from that the paper has a lot of statements they just expect us to take at face value, That's simply poor science. I can't see any scientific journal accepting this.


Finally I would point the earnest seeker after truth towards the following online commentarys:

And once again the main topic of conversation is computers and our woefully inadequate ISP. Apparently Dave B-P spoke to BT yesterday and they have made our case a priority. Nearly 24 hours later and nothing has happened.

*  Jon Downes, the Editor of all these ventures (and several others) is an old hippy of 53 who - together with his orange cat (who is currently on sick leave in Staffordshire) puts it all together from a converted potato shed in a tumbledown cottage deep in rural Devon which he shares with various fish. He is ably assisted by his lovely wife Corinna, his bulldog/boxer Prudence, his elderly mother-in-law, and a motley collection of social malcontents. Plus.. did we mention the orange cat?
Posted by Jon Downes at 1:25 PM No comments:

Is there anyone out there in the CFZ Readership who can read Russian? And furthermore could they (and would they) be able to translate a lengthy document for us? If you don't ask, you don't get.
Posted by Jon Downes at 12:45 PM 2 comments: 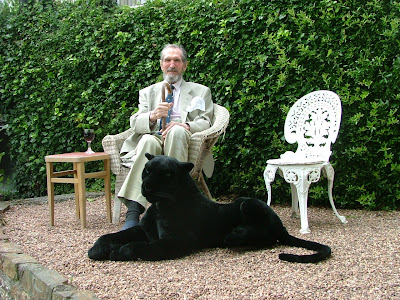 On this day in 2006 my Father died. We didn't get on for most of his life, but for the last three or four months we were friends. I miss him still...
Posted by Jon Downes at 11:51 AM No comments:

Following on from my post this morning, it now appears that Melba Ketchum's paper sequencing the Bigfoot Genome has now been published. It appears that the two separate journals DeNovo and Journal of Advanced Multidisciplinary Exploration in Zoology are actually one and the same, and although no explanation for why the second of these two titles is now being published by the former, and that Scolastica are now out of the picture is, I suppose, none of our business.

The backlash against the credibility of this new journal, has spread. Loren writes:

Breaking update: The paper has been published. But there are some major problems that are being revealed with the publication in which this paper is appearing. Number one that the “journal” (or website) is new, apparently purchased as a way to get the paper published. The domain date is February 4, 2013. Not enough time for any credible peer-reviewing under the editorship of a new journal. Is this vanity publishing? Is this scientific suicide?

One has to agree with him. To self-publish something of this magnitude in an unknown journal would seem to be rather unwise. I have not yet received an answer from Dr Ketchum or anyone else at DeNovo, replying to my request for press access. However, once again I seem to have been overtaken by events. Because it has now, allegedly, been published. I do, however, have one question.

WHERE THE BLOODY HELL IS IT?

If you go to the Journal Page on their website, its all very nicely laid out, but where is the journal? Where is the link to read or buy a copy? I expect that I am just being dumb here, but please can someone let me know...
Posted by Jon Downes at 10:53 AM 1 comment:

Our hearts, thoughts and prayers go to Matthew Williams at this sad time.
Posted by Jon Downes at 10:26 AM 3 comments:

Hope everyone has a Happy Valentines day, except for the git that reserves tables at all the restaurants 6 months in advance so he can sell them off to the highest bidder.
And now the news:


All you need is love:
http://www.youtube.com/watch?v=r4p8qxGbpOk
Posted by Jon Downes at 10:25 AM No comments: