I KNOW SOME OF YOU WERE SUSPECTING THAT IT WOULD NEVER ARRIVE BUT... 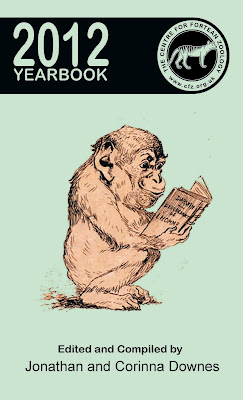 Here is the cover. We are just waiting for two more submissions (we will spare the blushes of the tardy authors), and with luck and a fair wind the 2012 Year Book (our 14th) will be out in a couple of weeks.
Posted by Jon Downes at 8:50 PM No comments:

MORE TOUCHING POULTRY NEWS (ever get the impression that SOMEONE in the CFZ is obsessed with chickens?)

The next bloody bag of “mystery meat” from overseas could contain a virus that will ravage our native wildlife population or indeed ravage us-“Bush meat” is the name euphemistically given for things killed in the (generally African) “bush,” and consumed by hard pressed natives who either don’t care or can’t be choosy about what [...]

LARS THOMAS: A little something for the blog 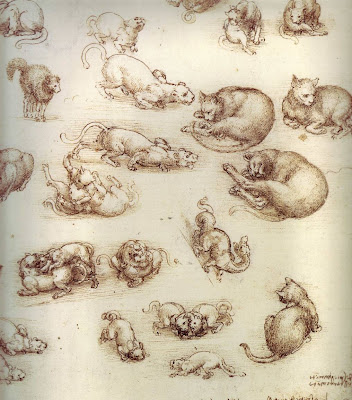 Whilst pursuing one of my minor hobbies (the life and times of Leonardo da Vinci) I stumbled upon this drawing done by the great man probably in 1513, intitled 'Studies of cats and other animals.' All well and good - I see several cats, something looking like a lion and perhaps a couple of bears fighting. But what is that thing just below and to the right of the middle of the drawing? I know Leonardo did several drawings of costumes and set pieces for theatre, one of which a large dragon, but he usually labeled his drawings and made various notes about them. But this creature is just inserted in between all the 'regular' animals. Ideas anyone??

http://cryptozoologynews.blogspot.com/
On this day in 1974 the Symbionese Liberation Army kidnapped heiress Patty Hurst. In what has become the most documented case of Stockholm Syndrome, Hurst ended up as a member of the gang, helping them to commit armed robberies and other crimes.

I could post “Roland the Headless Thompson Gunner” as the signoff vid (again) but instead here’s “You Got Your Baby Back” by the Mystical Knights of the Oingo Boingo, which tells Patty Hurst's story via the medium of "doo-wop", enjoy:

I've said it many times before, but it still bears repeating – reports of mysterious animals can turn up in the most unexpected places. For example: you're hardly likely to discover a report of an extraordinary, unidentified reptile in the autobiography of a major convicted drug smuggler, right? Wrong!

This cutting, which deals with the Gloucester big cat suspected of having killed a deer recently, was sent in by CFZ author Paul Williams, author of The Mystery Animals of the British isles: Gloucester and Worcester, which was one of Loren Coleman's books of the year in 2011.

Thanks for that mate!

Whilst on the subject of Pygmy Elephants:

Email ThisBlogThis!Share to TwitterShare to FacebookShare to Pinterest
Labels: elephants

Another article on The Jade Trade for both New World and Sundaland versions:
http://frontiers-of-anthropology.blogspot.com/2012/02/origin-of-ancient-jade-tool-baffles.html

And a new one for Cedar And Willow tying in 1960s cartoon Space Angel to the Star Trek continuity
http://cedar-and-willow.blogspot.com/2012/02/space-angels.html
Posted by Jon Downes at 9:55 AM No comments:

Following on from yesterday's post about Matt Salusbury's quest for pygmy elephants, he has sent along another email from our old friend Lars Thomas.

A mother believes her daughter has spotted the elusive Palace Puma.

The 54-year-old said: "Georgia came in from work.

"She was literally shaking and was frightened and said she had just seen an animal down the road.
Read on...
Posted by Jon Downes at 9:48 AM No comments:

The RSPB has launched its annual search to find the farmer that does the most for nature.

The Nature of Farming Award aims to find the farmer who has put in the most work on their land to help wildlife in the countryside. The competition is run by the RSPB, supported by Butterfly Conservation and Plantlife, and sponsored by The Telegraph.

The conservation charity has already received a high level of entries, with applications being accepted until the 20th April.

After the closing date, entries will be shortlisted to eight regional winners, and then a panel of experts will decide which four should go through to the national finals. There will also be a highly commended category, to recognise the efforts of farmers who have excelled in their support of farmland wildlife.

Tony Whitehead, spokesperson for the RSPB in the south west said: “The south west is rich in wildlife, much of this benefitting from the hard work of farmers with the support from agri-environment schemes. In the past few years we’ve had a number of West Country farmers in the finals and would love this to continue. It’s a great opportunity for farmers across the region to showcase what they are doing every day on their farms to look after the fantastic wildlife of our countryside.”

The UK public will decide the overall winner by casting their votes online, over the phone, via The Telegraph, or at country shows throughout the summer. Last year the competition attracted an unprecedented number of votes, with over 22,000 people backing their favourite finalist.

RSPB Head of Species and Habitats Conservation and one of this year’s judges, Darren Moorcroft, said: “There are so many great farmers out there who have taken the small and simple steps, like putting in skylark plots and wild bird seed mixtures, which makes a real difference to health of our countryside.

“The standard of entries and winners since we launched this award in 2008 is truly inspirational. I can’t wait to see this year's gems.”

All the details on how to enter can be found on the RSPB website at – www.rspb.org.uk/natureoffarming

The EU LIFE+ Programme funds RSPB work which supports wildlife-friendly farming that furthers sustainable development.
Posted by Jon Downes at 9:03 AM No comments: