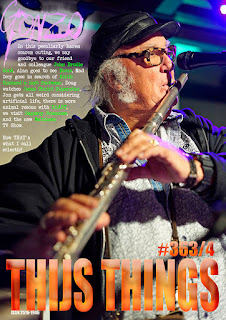 A friend from Minnesota (Greg Brick) sent me a  few pages quite recently from a magazine  whose title wasn`t included, however the story was ` Wildlife fables` by Philip D.Jordan then (1950) a professor of History at the University of Minnesota. I include here the most interesting parts of the essay

" Story-telling flourishes best when pine-knots blaze and when, after lines are dried and guns cleaned, weary men of the out-of-doors relax. Then the tall tale, America`s own unique contribution to world yarning, reaches out from the imagination to tell of fabulous folk heroes...Old timers tell also of strange animals that once roamed Minnesota`s north country and now are scarce and rare because the state has given them no protection...Plum Nelly today knows more about the Swamp Auger,Snow Snake,Agropelter and Hodag than any living naturalist.his long life in the woods has brought him into close contact with the Hidebehind and the Tote-Road Shagamaw.  He is not concerned with any conservation program for the Gamehog...

"A distressingly ugly animal , the Hodag,as described by old-timers...has a knobby head from which two prominent eyes bulge. Two heavy lateral horns, like those of a male stag-beetle, make him a fierce foe. The claws are stout and powerful, and the saw-toothed tail terminates in a hook. A row of dorsal spines runs from tip of nose to end of tail...A group of Kabekona county sportsmen, including local Isaac Walton League,made definite plans during the winter of 1949 to preserve Minnesota`s few remaining Snow Snakes. According to all accounts, the Snow Snake ( Aestateesommus hiemepericulosus) first was recognized during the year of Two Winters, when temperatures in August dropped to 71 degrees below zero...Pure white in color, the Snow Snake blends so harmoniously against its white background that no one has distinguished its shape or size.

The author then mentions the Agropelter (Brachiipotentes craniofractans),or "forest monkey", tame enough to be carried in a shirt pocket and able to darn socks."Needleeye, an Agropelter from Stillwater, took a blue ribbon at the state fair in 1861 for the best bit of embroidery - a covering for the deacon`s seat.Agropelters were then described as being so sort after that they were trapped and sent to work in spinning mills in the southern U..S.A. They became unpopular as they were trained by Minnesotans to become violent to prevent their enslavement in the southern mills.

A curious bit of folklore is attributed to a mystery snipe, in that when it becomes excited it emits sparks. "Competent naturalists for years have insisted that the great Hinckley fire of 1894 was started with such sparks... Like the Snipe, the Filla-Ma-Loo bird (Fulica stultusregrediens) ,never has been caught, but its numbers are increasing in Minnesota...Known variously as the Flu-fly Bird and the Goofus bird, the Filla-Ma-Loo has a Turkey-like head on a long bottle-green neck that is spangled with large,silvery scales. A black right wing and a pink left one makes a color combination hard to miss...All Filla-Ma-Loos are male."
Posted by Jon Downes at 11:16 AM No comments:

ON THIS DAY IN -  1793 - The Louvre Museum, in Paris, opened to the public for the first time.
And now some more recent news from the CFZ Newsdesk