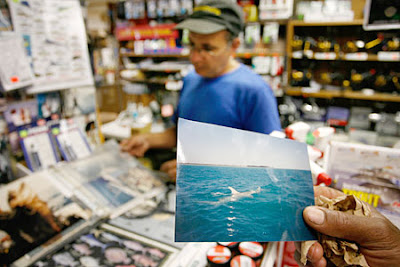 "He's bigger and badder than Jaws. Got a head as wide as a pickup truck," says Larry Mastry, 53. "I've heard he's anywhere between 20 and 25 feet," says Capt. George Roux.

For decades local anglers have called him Old Hitler, the great hammerhead shark who allegedly lurks in the summertime waters around the Sunshine Skyway bridge. As the weather heats up, so do the tales about the legendary fish with an evil name who can snap a large tarpon in two with one chomp."Read more about the legend of Old Hitler at: http://www.sptimes.com/

Posted by Jon Downes at 5:49 PM No comments:

JON'S JOURNAL: Be careful of the flowers

Friday night saw what was almost certainly the first frost of the winter.

The mild weather has been good news for our fuel bills (or at least I bloody well hope so), and with rising power prices (and rising everything else prices) we certainly need some good news, but the environmental knock-on effects have been less positive.

Although the mild weather means that there were flowers on one of my rose bushes on Christmas Day and the annual Butterfly Conservation survey of first sightings recorded a Red Admiral on New Year's Day (Richard F. also saw one in his grandperents' garden early in January) it does mean that the passage of the seasons is all to cock.

Usually by now (mid-January) the snowdrops are out in force, and whilst there are snowdrops
(and I sent Graham out armed with camera yesterday lunchtime to prove it) from memory, there are nothing like as many as usual. 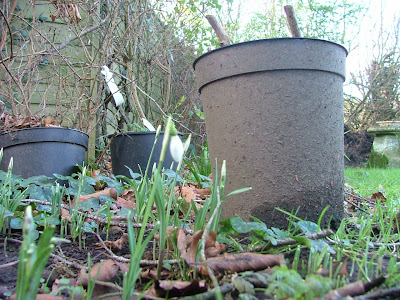 But this is where this Nature Diary thingy is going to come in useful. I have been happily watching the progression of the seasons over the last few years but not writing any of it down, so I cannot actually tell you for sure whether these impressions are true.

However, there is a bank at Cranford where there are usually dozens of snowdrops. But this year nada. I said this to Max last week and he suggested that the mild winter might actually be the reason for this. Could the snowdrops need a hard ground frost to trigger their growth?

It's a compelling idea.

But on the other hand, the daffodils, which are usually not up until March/April, were flowering over Christmas and the crocuses (which are not usually up until the end of February) are out already. 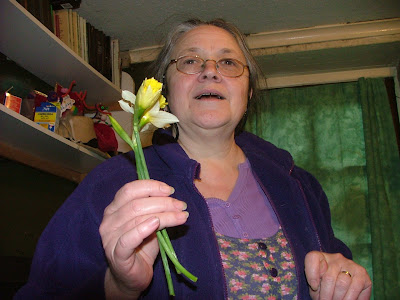 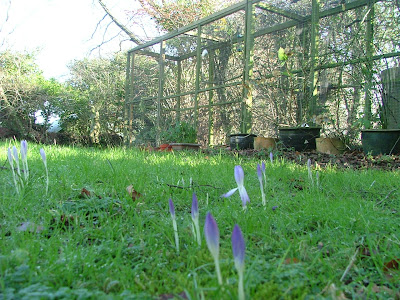 And all winter birds have been singing even in the middle of the night. Strange, huh?

With the headline, you expected me to do a link to the god-like John Otway, with or without Wild Willie Barrett singing, 'Be careful of the flowers, cos you know they're gonna get you, yeah', but I did that last year, so I am posting this song - the title at least seems chillingly appropriate (and it has a tune, so Syd will approve).

You poor take courage
You rich take care
This earth was made a common treasury
For everyone to share
All things in common
All people one
We come in peace
The orders came to cut them down
Posted by Jon Downes at 5:19 PM 1 comment:

WATCHER OF THE SKIES: Ageing swans and Irish blackcaps

The Winterling is the name given to a Berwick swan that has migrated to Slimbridge Wetland Centre in Gloucestershire to spend the winter there each year. She would have turned 29 last year and if she returns to the reserve she will be the oldest recorded wild swan. 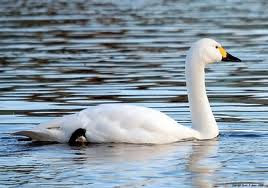 According to Dave Paynter, who is reserve manager at Slimbridge, geese, ducks and swan numbers have been down so far this winter due to the mild weather, although there have been higher numbers of waders such as lapwing, dunlin and golden plover. However, some birds further north have delayed their migration and it is hoped that the expected arrival of a spell of cold, dryer weather, together with easterly winds, will encourage a late migration and that reserves like Slimbridge will see an influx of wintering birds.
You can read more about this at: http://www.google.com/hostednews/ukpress/article/ALeqM5gCoDl6WXIMNbbdUIzkzGnr34wc8g?docId=N0951951326386982687A

Once a scarce visitor fro The blackcap is a member of the Sylviidae family, and the RSPB bird guide describes it as "a distinctive greyish warbler, the male has a black cap, and the female a chestnut one. Its delightful fluting song has earned it the name 'northern nightingale'.”

Waterford Today looks into why the species chooses to ignore its usual wintering areas in southern Europe and North Africa.

Don’t forget that the RSPB is holding its Big Garden Birdwatch on Saturday January 28 and Sunday January 29. Log on to http://www.rspb.org.uk/ for more information.
Posted by Jon Downes at 3:38 PM No comments:

Abstract.-In the United States, trade is monitored at different levels of government and state level insight requires combining federal, state, and local sources of information. Trade in wildlife and their products has implications on wild populations of species involved and introduction of non-native vertebrates, especially amphibians and reptiles, is linked to the commercial trade in these animals. We used:


(3) observations of sales at live animals expositions; and


(4) data collected from dealers on the Internet

...to quantify imports, exports, and use of exotic herptiles traded in Texas.

We recorded 1,192 unique taxonomic entities of amphibians and reptiles in commercial trade in Texas. A total of 949,901 live specimens were imported to Texas from 2002 to 2008. The top 16 imported taxa made up 73.36% of the trade. Internet and exposition-based trade was dominated by few species of common pets, with others represented in small numbers. Much trade persists in known invasive species and others that must have the potential to become invasive. We documented trade in 36 known invasive species, three of which are invasive in Texas. Our approach could serve as a template for assessing trade in non-native species at regional scales. Modifications to national databases would allow exports to be distinguished from re-exports, and adoption of standardized taxonomy would improve understanding of impacts of trade on species. State level management changes should be consistent across all 50 states to add continuity to laws governing non-native amphibians and reptiles kept as pets.
Posted by Jon Downes at 2:11 PM No comments:

http://cryptozoologynews.blogspot.com/
On this day in 1759 the British Museum opened its doors for the first time. Charles Fort himself used the reading room of the British museum during his research.
And now the news:

Here are just some of the treasures of the British Museum:
http://www.youtube.com/watch?v=3QI3cOqyQE0
Posted by Jon Downes at 1:34 PM No comments:

Corinna and I are going to be away for five or six days from tomorrow. We will still have access to a computer so as far as I know the blog will continue as normal. However, Graham is running the CFZ in my absence and will take over bloggystuff if necessary.
Posted by Jon Downes at 1:28 PM No comments:

FRONTIERS OF ANTHROPOLOGY: Peopling of the Americas

Some working with maps, charts, and statistics from Wikipedia as regards the peopling of the Americas:
http://frontiers-of-anthropology.blogspot.com/2012/01/some-largescale-migrations-into-new.html
Posted by Jon Downes at 1:18 PM No comments: