THE GONZO BLOG DOO-DAH MAN IS ON THE RAMPAGE

And so another week begins, and Dave B-P deserves a medal for having done whatever arcane thing he did to British Telecom. Our broadband is almost back to normal, and so I can finally stop bellyaching about it! I am just waiting for the knackered hard drives to be un-knackered, and we can get on with our collective lives. This afternoon I have the results of my diabetic blood tests, and as long as they haven't found something nasty, I can happily get on with the rest of the week. Here's hoping.

*  Jon Downes, the Editor of all these ventures (and several others) is an old hippy of 53 who - together with his orange cat (who is currently on sick leave in Staffordshire) puts it all together from a converted potato shed in a tumbledown cottage deep in rural Devon which he shares with various fish. He is ably assisted by his lovely wife Corinna, his bulldog/boxer Prudence, his elderly mother-in-law, and a motley collection of social malcontents. Plus.. did we mention the orange cat?
Posted by Jon Downes at 1:30 PM No comments:

CRYPTOLINK: Search for the Yeti InfoGraphic 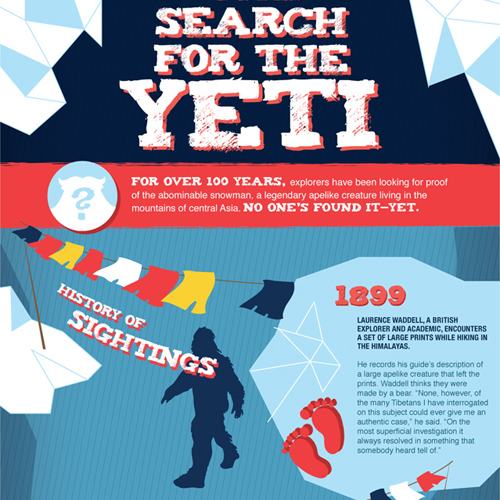 At OutsideOnline.com they have created one of the most fantastic visual timelines of the Himalayan Yeti's history. It is much too huge to show here at BLC, but after this second sample below you can go directly to this beautiful piece of art.The infographic is by Anne Rhodes and the research was done by Noah Aldonas.

The when you get to the infographic its is a vertical scrolling timeline breaking down the history of the Himalayas' most famous monster, from ancient legends to Russia's yeti museum.

It has a great punctuation at the end that provides all possible explanations of Yeti sightings--including the possibility of a real Yeti!

One nice, comfortable day I drove down to the Lewiston Landing and ran into three other old fossils hanging around; one was leaning over the rail expecting to see some gigantic fish swim up within sight so he could ooh and aah at the monster, the other two were checking to see what boats were out fishing, and we all started chewing the fat. We all knew one another because we were associated somehow within the fishing circles, or should I say fishing community. If you visit the Landing, it is likely you will see some of us old codgers parked in the handicapped area at the Landing overlooking the river.
One guy, Mike, the gabbiest, said, "Mark, did you hear about the 'Bigfoot' that was spotted last summer over off Balmer Road in the woods? Ya know, over there, between Balmer and Swann?"
After a chuckle from 'Crappie King' Bill and the others, I asked if he was serious. "Yeah!" Was his reply. I told him, "I think you watch too much Animal Planet on TV." Then I asked him, "Did you see it yourself?" "Nope, but my buddy said he heard about it."
I thought, here we go again, somebody's imagination gone astray. It was probably a deer, a big dog or even a coyote this person saw and the story grew into being a "Bigfoot" sighting.
I told Mike, "Do you realize 'Bigfoot' or 'Sasquatch' stories have been around since the late 1800s and yet up until today, no one has ever proved them to exist?" No one ever found an expired one where it could be positively identified. Then I mentioned, right here in our own Niagara River, we have something that has existed since the dinosaur days and it still exists today, and it's really real. When I said that, I was looked at like some kind of person that has lost it. Then Kool Jimmie, the coolest guy of the bunch spoke up and said, "Are you talking about sturgeon?" Yes, I told him. Lake Sturgeon to be exact.
Read on...
Posted by Jon Downes at 12:29 PM No comments:

On this day in 1930 a cow flew for the first time. The cow's name was Elm Farm Ollie and was milked during her flight on the aircraft. The milk was put into paper cartons and parachuted down to spectators, who according to reports at the time eagerly grabbed this bounty from the skys more likely though they looked up at the sky and had just enough time to say “What in tarnation!” before being hit full face with a flimsy paper carton of milk that exploded all over their face and clothes. It must have been gloriously funny to watch.


Dancing cows:
http://www.youtube.com/watch?v=FavUpD_IjVY
Posted by Jon Downes at 11:30 AM No comments: