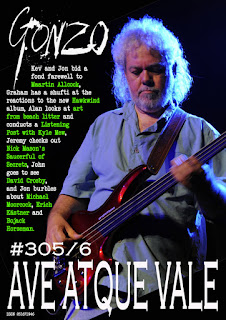 
SPECIAL NOTICE: If you, too, want to unleash the power of your inner rock journalist, and want to join a rapidly growing band of likewise minded weirdos please email me at jon@eclipse.co.uk The more the merrier really.
Posted by Jon Downes at 8:46 PM No comments:

NEWS.com.au
UNTIL this month, it had been years since anybody claimed to have seen the legendary Ogopogo — Canada's version of the Loch Ness monster.

Mysterious lake creature spotted
Newstral.com
UNTIL this month, it had been years since anybody claimed to have seen the legendary Ogopogo — Canada's version of the Loch Ness monster.»
Posted by Jon Downes at 12:34 PM No comments:

Bigfoot Festival in Oklahoma tapped to thrill all ages

Times Record
The public's fascination with Bigfoot will continue to endure for decades and decades, according to one area individual. Proof that thoughts centering ...
Posted by Jon Downes at 5:30 AM No comments:

ON THIS DAY IN -  1066 - England was invaded by William the Conqueror who claimed the English throne.
And now some more recent news from the CFZ Newsdesk