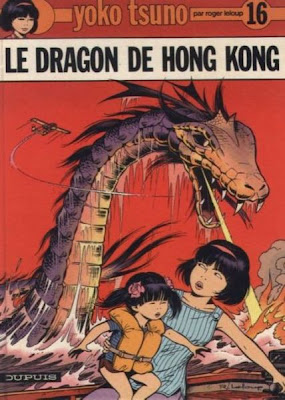 Today`s blog is about a comic/book I came across whilst doing a general Google search for Hong Kong mystery animals using Babel Fish. The comic is Le Dragon de Hong Kong and this is what Wikipedia has to say about it:

While going to visit her Chinese cousin in Hong Kong, the junk Yoko travels on is suddenly attacked by a giant lizard. When Yoko investigates, she discovers that the `dragon` was actually a part of an ambitios movie project. Involved in the project is a little girl called Rosée du Matin (Morning Dew) Yoko becomes very fond of. She is the orphaned daughter of the biologists that created Dai Loon, and she is the only person able to tame the creature somewhat.

Suddenly a second, mechanized dragon appears and begins terrorizing Hong Kong Bay (1) .Through a bank involved with the movie`s budget, Yoko finds the second dragon`s creator Tung, but he takes her and Morning Dew hostage. Tung wants to demonstrate the abilities of his artificial dragon by wreaking havoc around Hong Kong Bay and turning the reports of the destruction into a movie. Yoko manages to fax a part of the script to Vic and Pol, who try to catch up with the robotic dragon. Eventually the robot is attacked and destroyed by Dai Loon, who wishes to free his little friend, but the giant lizard is killed when the robot explodes. During the story, Yoko attains guardianship over Morning Dew and decides to adopt her. (2)

1. As far as I know there is no “Hong Kong Bay” . The nearest I can think of is Victoria Harbour on the N. shore of Hong Kong island

HELP!: If you can read French, I`d appreciate your help in translating various crypto documents in that language. Thanks!
Posted by Jon Downes at 9:51 PM No comments:

First published in 1642, "Monstrorum Historia" is a 948-page manuscript detailing anomalies to the then-known animal kingdom. While many of the creatures discussed were indeed mythical, others were envisioned hybrids combining attributes from two or more species. Some explored variations of birth deformities, such as conjoined twins, while others outlined mutations of legendary monsters, such as a five-headed cyclops, as well as creatures from the Netherworld. Intended as a scientific discourse, the "gargantuan" tome was written in Latin by Ulissi Aldrovandi with numerous woodcut illustrations by Jean-Baptiste Coriolan

http://tartuffesfolly.posterous.com/mutations-hybrids-distortions-and-godless-mon
Posted by Jon Downes at 4:54 PM No comments:

It was the rock and roll rumour that Jon has always wished that he'd started; the story that mass murderer Charles Manson had auditioned for the first and most succesful boy band. But is it true? Of course not, but who was it who first started the (oddly belevable) story?

On this day in 1942 Richard O’Brien was born. O’Brien is most well known as the author and star of the Rocky Horror Show and as the host of the Crystal Maze (before that Tudor-Pole numpty ruined it).

Posted by Jon Downes at 2:42 PM No comments: 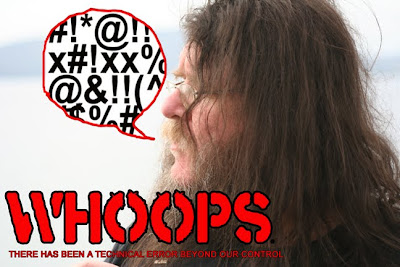 SORRY FOR DISRUPTION TO THE BLOG SERVICE TODAY. SOMETHING HAS BEEN WRONG WITH OUR BROADBAND CONNECTION!
Posted by Jon Downes at 2:28 PM No comments:

New on Frontiers of Zoology:
http://frontiersofzoology.blogspot.com/2012/03/tracking-belief-in-bigfoot.html
Posted by Jon Downes at 2:26 PM No comments: