A fallen tree blocked the trail up into Nokrek National Park.
We had to cut it up with a saw! 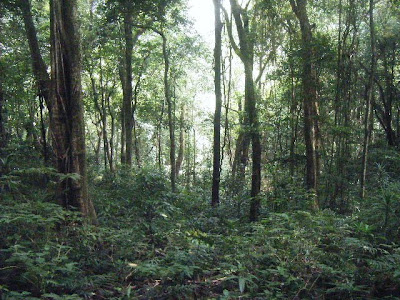 A shot of the jungle at Nokrek. It is some of the most undisturbed
rainforest in India and the home of the wild ancestor of the orange. 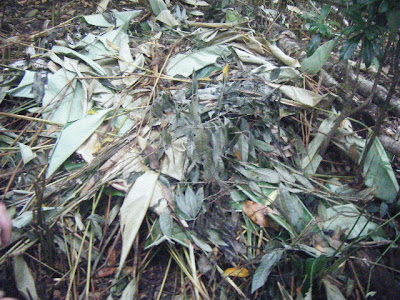 The nest of a wild boar found on our first day at Nokrek.
The mande-burung is said to build huge nests by
twisting branches together to form a kind of roof. 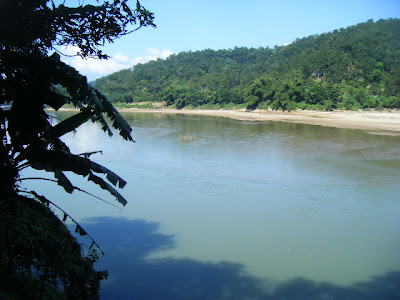 A view of the beautiful Simsang (rice pot) river at Baghimara.
Of an evening I read Kipling's Jungle Books
(so cheapened and bastardised by Disney)
overlooking the Simsang as the sun went down. 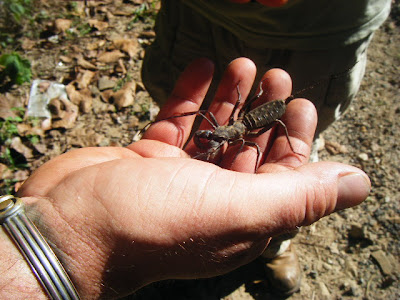 This is a whip scorpion captured by Dave Archer.
Despite appearances, it is harmless due to lacking a sting like true scorpions.
Posted by Jon Downes at 12:03 PM No comments: 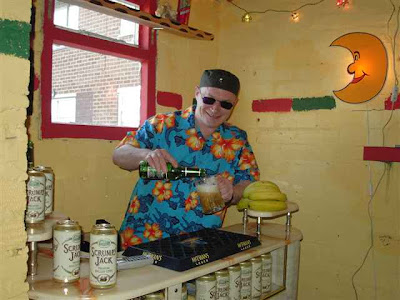 Why not write a book about that strangest of creatures... The Green-Eyed Monster? He does not need a full moon to transform him into a beast; just a simple glance at someone else's achievements is enough to send it into a foaming at the mouth rage.

I speak, of course, of Richard's detractors. The poor bloke cannot do right for doing wrong! His reputation is hauled over the coals for simply presenting the evidence he has gathered. Yet if they doubt what he says then the answer is simple....GET OFF YOUR LAZY ARSES AND DO THE RESEARCH YOURSELVES! But of course they won't, as there is too much pizza to consume and 'I'm a celebrity, increase my bank balance' on the TV to watch.

It seems some people are capable of being able to cause an argument in an empty house!

DAVID BRAUND-PHILLIPS: A bet about seahorses

The other evening David and his girlfriend Jess were talking about the blog. "I bet you can't just sit down and write a blog about...um SEAHORSES!" said Jess. "I bet I can" said David...

Both seahorses can be found from the Shetland Isles down the west coast of the UK (and all around Ireland) and along the south coast of England.

There are between 30 and 40 species of seahorses worldwide, and possibly as many sub-species. It is often difficult for scientists to identify seahorses because individuals of the same species can vary greatly in appearance.

New species continue to be found. They live in shallow weedy areas. In winter they move into deeper waters to escape the rough weather.

The point behind the writing of this blog is to make everyone aware of the danger even a small animal like this can find itself in from human threats.

As conservation is becoming an ever larger part of working and learning about animals.

The biggest threats to this particular fish are:

* The pet trade takes an estimated one million seahorses a year.

These are also very common threats to many species around the world.

There are many organisations doing a brilliant job to help the seahorse, with various successful breeding projects and research activity to give the seahorse the best possible chance. However, as with all things, we have to ask is it enough?

THESE ARE TURKEY VULTURES I THINK

FLYING SQUID. CAN SUCH A THING BE? 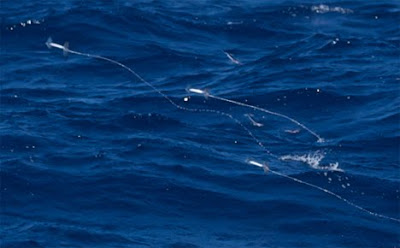 Our old friend Simon Reames, who we first met back in 1998 when as a schoolboy he followed Graham's and Jon's adventures in Puerto Rico, sent this peculiar story about flying squid.

Once, while boating off the coast of Jamaica in 2001, marine biologist Silvia Maciá and her husband caught a glimpse of an oddly familiar creature leaping from the waves, soaring with ease over the surface of the ocean. As the animal propelled itself for some 30 feet, Maciá realised she was witnessing the most unusual sight -- a flying squid. So intrigued by what she saw that day, Maciá would go on to co-author a paper examining similar observations, though essential photographic evidence of the incredible phenomenon remained elusive. That is, until now.

http://www.treehugger.com/files/2010/11/photographic-evidence-proves-that-squid-can-fly.php
Posted by Jon Downes at 11:19 AM No comments:

On this day in 1978 Harvey Milk was assassinated.
And now, the news:

Thanks ants:
http://www.youtube.com/watch?v=TrryML0XVuY
Posted by Jon Downes at 11:14 AM No comments: