Posted by Jon Downes at 8:01 PM No comments:

MUIRHEAD`S MYSTERIES A strange object found in Minnesota in 1959 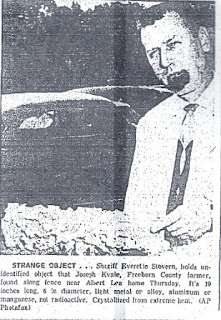 This photograph appeared in the Winona Daily News. Minnesota, on July 10th
1959.The object was composed of an alloy , aluminium or manganese,"not
radioactive." It looks like some huge piece of Chunky Bar chocolate.I never
knew aliens like chocolate!
Posted by Jon Downes at 4:17 PM No comments:

Before It's News
From the Omaha Indian Reservation in Nebraska, Elvis Freemont discusses the sighting he had at night with his brother of a bigfoot creature.
Posted by Jon Downes at 3:40 PM No comments:

ON THIS DAY IN - 1477 - William Caxton produced "Dictes or Sayengis of the Philosophres," which was the first book to be printed in England.
And now some more recent news from the CFZ Newsdesk