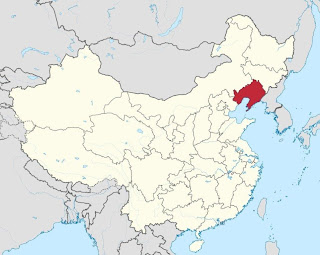 This image seems to show a long skeleton of the backbone of some sea creature  in 1934.I found it on a Chinese cryptozoology web site in early September.The only information I have is that on August 8th 1934 the Shengjing Times,apparently a reputable newspaper,reported that a living dragon had been found in some reeds and later its decomposed body was transported by the 6th Branch Police Department to near the West Customs Pier where it was photographed and put on display to local residents.

The Yingkou City Records vol 1 (1934) describe the monster as having spine bones 1m apart.The animal appeared 20 km up an estuary near Yingkou. Liaoning Province N.E. China. It`s tail was rolled up,with big eyes and a grey body.The animal was weak and local people poured water on it to keep it from drying too much.

After a severe storm and deluge,the "dragon" appeared a second time but this time only as a smelly corpse, the muscles rotting, at the reeds in Liaohe estuary.Many visitors came from surrounding cities to view the remains of the "dragon."It had a "curiously horned head."The bones were lost in 1939 because of the civil unrest in China at that time.Someone said they were cow bones,my Facebook Friend Sebastian Wang told me it was a baleen whale
floundering reed beds in China in 1934??!)(1)

Sadly the bones are missing.

A word about cryptolinks: we are not responsible for the content of cryptolinks, which are merely links to outside articles that we think are interesting (sometimes for the wrong reasons), usually posted up without any comment whatsoever from me.
Rex Gilroy, Australia's noted 'Yowie Man', field naturalist and historical researcher, is planning yet another search in the mountain country for more evidence of the 'Taree Bigfoot', who has been leaving his/her 40cm long footprints in forest soil since before European settlement.
He will be accompanied by his wife and fellow researcher, Heather, who has shared 41 years of marriage with him searching for yowies and mystery animals in the Australian bush.
Rex the 'Yowie Man' is currently celebrating 56 years of Yowie (ie relict hominin) research. He will soon publish a book on the anatomy and physiology of relict hominins and is writing his life story. As he approaches 70 he has no intention of retiring.
"I believe we are closing in on the Yowie. 'His' identity is now known and lately we have shown these hominins to be the 'father' of America's 'Bigfoot'," says Rex.
He points out that the early Aborigines confused three races under the composite name 'Yowie' or "hairy man."
"One race of primitive creatures was an' apeish-looking' form of Australian Australopithecine, now called Australopithecus australis.
"We possess three skull-types dating back 2 million years of this species, found at Katoomba, Bega and near Bathurst. Like their African cousins these beings were herbivorous feeders and did not make tools whereas the other two races are between 1.6m and 3.66m in height and identified as Homo erectus.
Read on...
Posted by Jon Downes at 2:06 PM No comments:

A word about cryptolinks: we are not responsible for the content of cryptolinks, which are merely links to outside articles that we think are interesting (sometimes for the wrong reasons), usually posted up without any comment whatsoever from me.
A hunter in the Cree village of Wemindji in Northern Quebec claims he has spotted Bigfoot and has the photographs to prove it.
Indeed, Melvin Georgekish says he spotted a pair of the mythic creatures, also known as Sasquatch, while he was driving his pick-up truck along a road in a wooded area near his town.
He said he saw two sets of red eyes staring at him from the forest.

Cree hunter Melvin Georgekish found this footprint in the moss, at the spot where he'd seen a pair of 'red-eyed beasts' staring at him from the woods near Wemindji, Que. (Melvin Georgekish)

He drove on, then turned around, returning to the spot and flashing his lights, but the red-eyed beasts were gone.
At home, he tossed and turned all night.
"I was thinking and thinking, and there's no animal that has red eyes over here," Georgekish said. "I am a hunter, and I've never seen something like that."

Giant footprints in the moss

He returned to the same spot the next day and found giant footprints in the moss, the likes of which he had never seen before — one measuring 20 centimetres, the second, 35 centimetres.
He described the footprints as big and wide.
"You can see the toes, too. It's like a human foot, but way bigger than a human foot. Wider, too."

THE GONZO BLOG DOO-DAH MAN COMES BOUNCING BACK TO YOU

T'is Sunday, so again it's time

to do the Gonzo blogs in rhyme,
why? is a question that might come to you,
cos it makes me happy so to do

We start off with a brand new scene
the brand new Gonzo magazine
has been dispatched (we think its great)
so read it now and don't be late
http://gonzo-multimedia.blogspot.com/2013/09/gonzo-weekly-magazine-43.html

Now Corky Laing is here wayhay!
he's got the Gonzo track of the day
he's really good and not a bummer
he really is a fantastic drummer
http://gonzo-multimedia.blogspot.com/2013/09/the-gonzo-track-of-day-corky-laing-at.html

*  Jon Downes, the Editor of all these ventures (and several others) is an old hippy of 54 who - together with his orange cat (who is currently on sick leave in Staffordshire) and two very small kittens (one of whom is also orange) puts it all together from a converted potato shed in a tumbledown cottage deep in rural Devon which he shares with various fish. He is ably assisted by his lovely wife Corinna, his bulldog/boxer Prudence, his elderly mother-in-law, and a motley collection of social malcontents. Plus.. did we mention the orange cat?

Q What do you call a rhino without a horn?
A Quiet.


And now for a happy tune that you can whistle while you work:
Posted by Jon Downes at 2:03 PM No comments: