myncbeachphotos.com
Bigfoot Sighting? North Carolina Man Posts Footage of Thomas Byers of North Carolina claims he has video footage of a Bigfoot crossing a road.
Posted by Jon Downes at 12:08 PM No comments:

THE GONZO BLOG DOO-DAH MAN WONDERS WHAT IS AFOOT. HIS CHIROPODIST TELLS HIM

www.gonzomultimedia.co.uk/about.html
Yesterday evening Martin and Marianne appeared on the local radio station, The Voice, to talk about tomorrow night's Reflektions concert. Dutifully I sat and listened, and recorded it, but I thought they were only on for an hour and so I stopped listening at 8:00, mildly piqued that they had not mentioned my involvement in the project. Apparently their segment went on for another ten minutes, during which they did nothing ut say nice things about me, but by that time I was sitting in the sitting room playing Boom Beach on my iPad (damn you David B-P, this is the biggest time waster I have had in years). The section I recorded will be on the Wyrd blog later today. Thank you chaps for your kindness even if I didn't actually hear it. Hopefully someone else will have a recording.
THOM THE WORLD POET: The Daily Poem
http://gonzo-multimedia.blogspot.co.uk/2015/04/thom-world-poet-daily-poem_16.html
THE GONZO TRACK OF THE DAY: ATKINS MAY PROJECT "A World at War"
http://gonzo-multimedia.blogspot.co.uk/2015/04/the-gonzo-track-of-day-atkins-may.html
THIS IS WHERE EVERYONE OF DISCRIMINATION AND TASTE WILL BE TOMORROW NIGHT
http://gonzo-multimedia.blogspot.co.uk/2015/04/this-is-where-everyone-of.html
A SNEAK PREVIEW OF THIS WEEKEND'S MAGAZINE
http://gonzo-multimedia.blogspot.co.uk/2015/04/a-sneak-preview-of-this-weekends.html
Yes man offers the personal touch with his new show
http://gonzo-multimedia.blogspot.co.uk/2015/04/yes-man-offers-personal-touch-with-his.html
Adam Lambert interview at Ellen DeGeneres Show
http://gonzo-multimedia.blogspot.co.uk/2015/04/adam-lambert-interview-at-ellen.html
The Gonzo Weekly #125
www.gonzoweekly.com
Mick Abrahams, Jethro Tull, Blodwyn Pig, Magma, Robin Trower, G.G.Allin and the Murder Junkies, Brian Wilson, Mark Ellen, Hawkwind, Jon Anderson, and Yes fans had better look out!
The latest issue of Gonzo Weekly (#125) is available to read at www.gonzoweekly.com, and to download at http://www.gonzoweekly.com/pdf/. It has Mike Abrahams on the cover, and inside yours truly interviews the man himself about his extraordinary new album. Doug writes about Magma, Davey Curtis goes to see Robin Trower, and Jon critiques the new Brian Wilson album and the delightful autobiography of Mark Ellen. Neil Nixon reports on an even stranger album than usual, Wyrd goes avant garde, Xtul gets even more peculiar, and there are radio shows from Strange Fruit and from M Destiny at Friday Night Progressive, and the titular submarine dwellers are still lost at sea, although I have been assured that they will hit land again soon. There is also a collection of more news, reviews, views, interviews and pademelons trying to choose (OK, nothing to do with small marsupials having difficulty in making choices, but I got carried away with things that rhymed with OOOOS) than you can shake a stick at. And the best part is IT's ABSOLUTELY FREE!!!
This issue features:
Frances Bean Cobain, B.B. King,Mick Jagger, Barry Manilow, Shaun Ryder, Bertrand Pourcheron, Joni Mitchell, Karnataka, Strange Fruit, Friday Night Progressive, Bob Burns, James Best, John Shuttleworth, Hugh Hopper, Rocket Scientists, Tommy James, Birmingham Sunday, Inner City Unit, Mick Abrahams, OneRepublic, Ellie Goulding, Florence and the Machine, Brantley Gilbert,Mick Abrahams, Magma, Robin Trower, Hawkwind, Yes, Bill Bruford, Steve Howe, Rick Wakeman, Toto, 4th Eden, Mark Ellen, Xtul, Beatles, Elvis, Michael Jackson, Jimi Hendrix, Brian Wilson, Neil Nixon, G G Allin and the Murder Junkies, Vanir
Read the previous few issues of Gonzo Weekly:
Issue 124 (Karnataka cover)
http://www.flipsnack.com/9FE5CEE9E8C/gonzo123.html
Issue 123 (Cream cover)
http://www.flipsnack.com/9FE5CEE9E8C/gonzo123.html
Issue 122 (Anthony Phillips cover)
http://www.flipsnack.com/9FE5CEE9E8C/gonzo122.html
Issue 121 (Annie Haslam cover)
http://www.flipsnack.com/9FE5CEE9E8C/gonzo121.html
Issue 120 (Frank Zappa cover)
http://www.flipsnack.com/9FE5CEE9E8C/gonzo120.html
Issue 119 (Eliza Carthy cover)
http://www.flipsnack.com/9FE5CEE9E8C/gonzo119.html
Issue 118 (Dave Brock cover)
http://www.flipsnack.com/9FE5CEE9E8C/gonzo118.html
Issue 117 (Daevid Allen cover)
http://www.flipsnack.com/9FE5CEE9E8C/gonzo117.html
All issues from #70 can be downloaded at www.gonzoweekly.com if you prefer. If you have problems downloading, just email me and I will add you to the Gonzo Weekly dropbox. The first 69 issues are archived there as well. Information is power chaps, we have to share it!
You can download the magazine in pdf form HERE:
http://www.gonzoweekly.com/pdf/
* The Gonzo Daily is a two way process. If you have any news or want to write for us, please contact me at jon@eclipse.co.uk. If you are an artist and want to showcase your work, or even just say hello please write to me at gonzo@cfz.org.uk. Please copy, paste and spread the word about this magazine as widely as possible. We need people to read us in order to grow, and as soon as it is viable we shall be invading more traditional magaziney areas. Join in the fun, spread the word, and maybe if we all chant loud enough we CAN stop it raining. See you tomorrow...
* The Gonzo Daily is - as the name implies - a daily online magazine (mostly) about artists connected to the Gonzo Multimedia group of companies. But it also has other stuff as and when the editor feels like it. The same team also do a weekly newsletter called - imaginatively - The Gonzo Weekly. Find out about it at this link: www.gonzo-multimedia.blogspot.com/…/all-gonzo-news-wots-fit…
* We should probably mention here, that some of our posts are links to things we have found on the internet that we think are of interest. We are not responsible for spelling or factual errors in other people's websites. Honest guv!
* Jon Downes, the Editor of all these ventures (and several others) is an old hippy of 55 who - together with an infantile orange cat named after a song by Frank Zappa puts it all together from a converted potato shed in a tumbledown cottage deep in rural Devon which he shares with various fish, and sometimes a small Indian frog. He is ably assisted by his lovely wife Corinna, his bulldog/boxer Prudence, his elderly mother-in-law, and a motley collection of social malcontents. Plus.. did we mention the infantile orange cat?
Posted by Jon Downes at 11:44 AM No comments:

About Bald Eagles
Once pushed to the brink of extinction, the Bald Eagle has made a powerful comeback since the pesticide DDT was banned in the early 1970s. Minnesota has more Bald Eagles than any other state in the lower 48 states.
News for 2015


This is the third year DNR’s Nongame Wildlife program has streamed live video from a Bald Eagle nest in the Twin Cities metro area. We believe it’s the same pair of eagles that has nested here all those years. This year there are again three eggs in the nest. The first egg was laid on 19th or 20th of January, with all three being laid by the 25th of January. Eagles typically incubate their eggs for about 35 days. Although the nest has at times looked chilly, even covered in a blanket of snow for a while, Bald Eagles in Minnesota have adapted to laying and caring for eggs in these conditions. The male and female take turns keeping their eggs warm and dry in a deep pocket in the middle of the nest. Please check back often to see how the nest is doing, observe interesting behaviors such as parents switching off incubation duties, feeding, and protecting the eggs from the elements.
Posted by Jon Downes at 11:39 AM No comments: 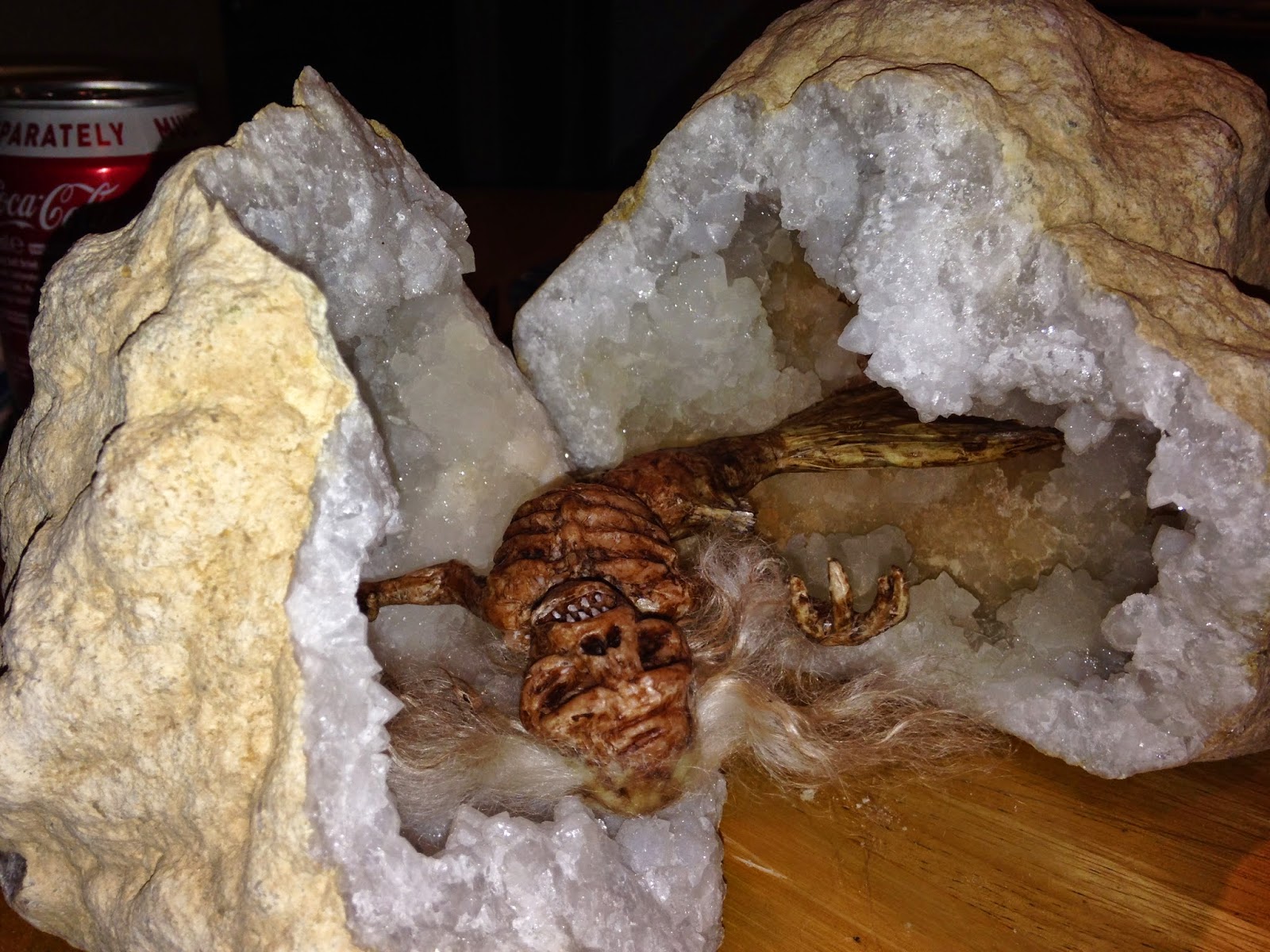 A good friend just emailed me this and I thought I have to send it you. I think it looks fantastic! So good in fact I'm now thinking sirenians have nothing to do with it and mermaids are real - their oviparous, and this is where they come from!! lol.

Hope all is well at CFZ HQ. 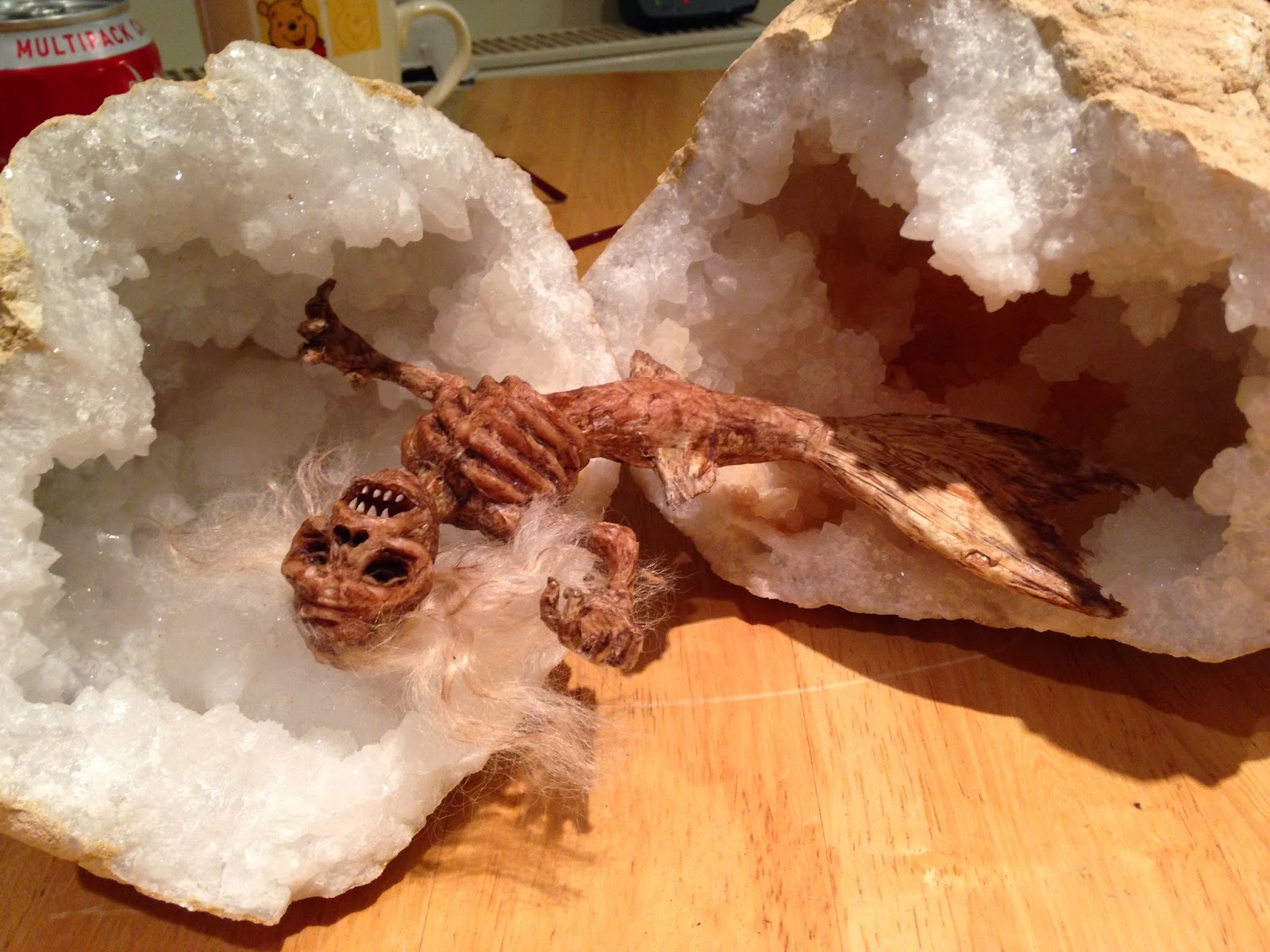 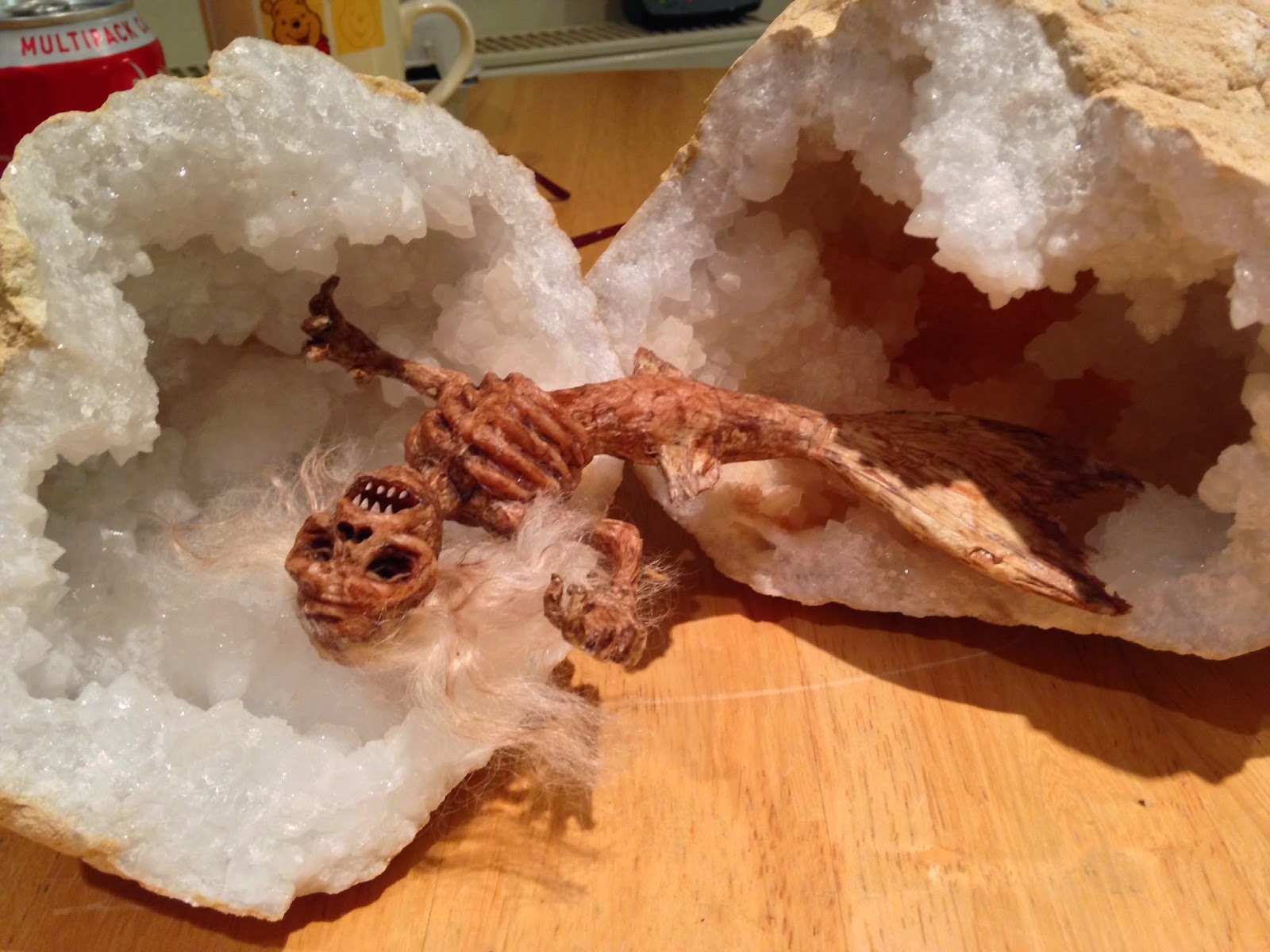 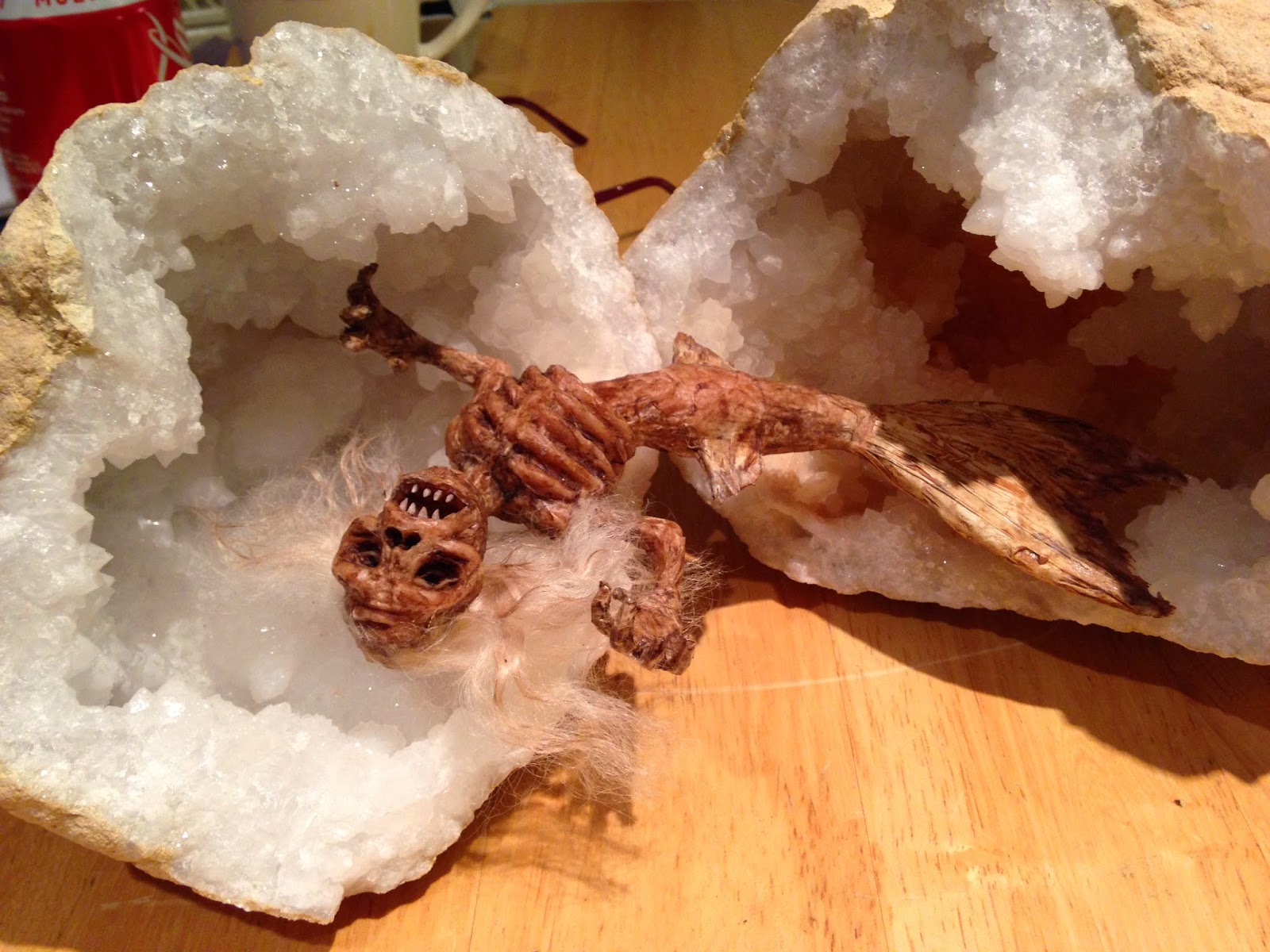 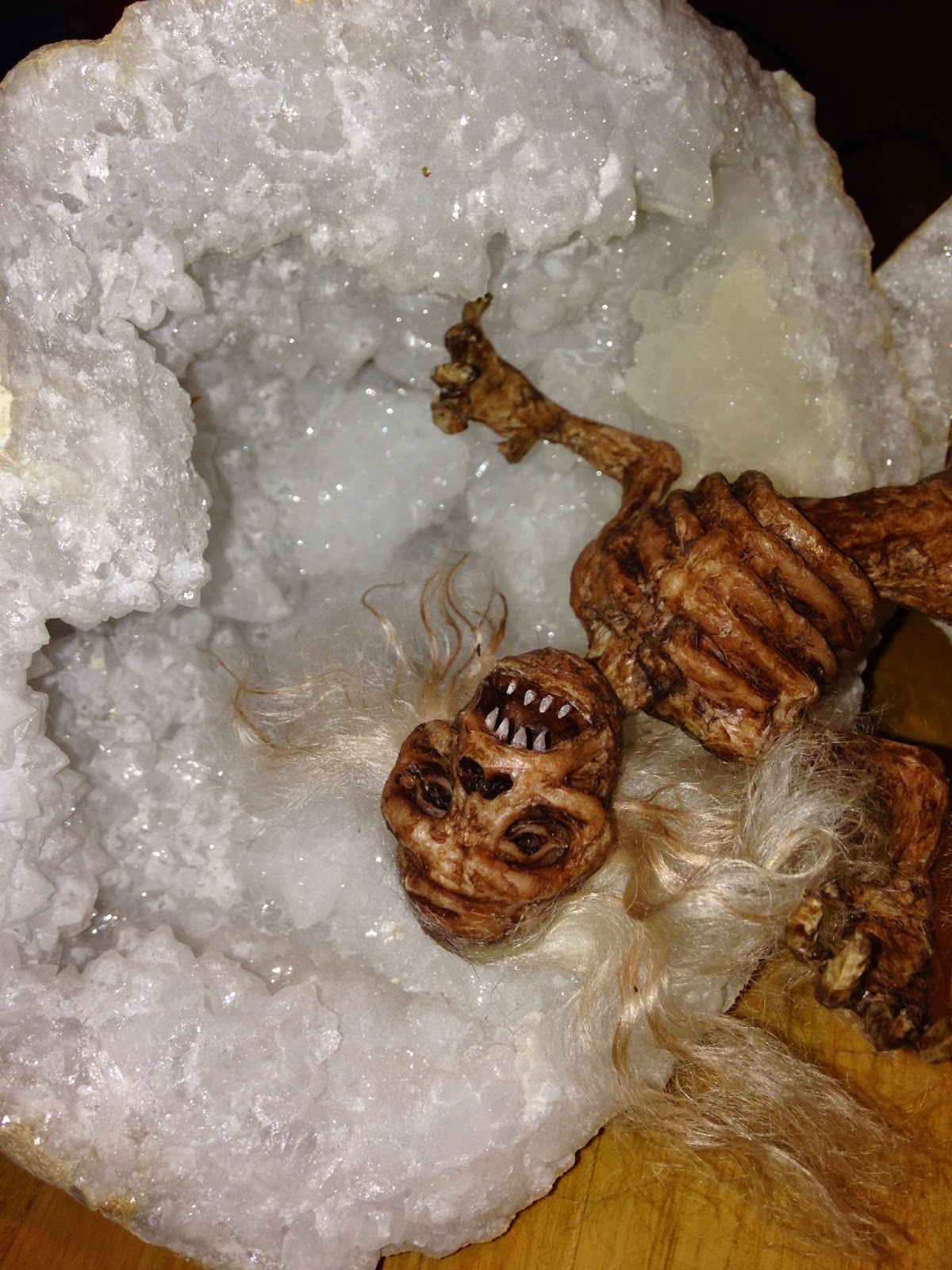 ON THIS DAY IN 1065 - The Norman Robert Guiscard took Bari. Five centuries of Byzantine rule in southern Italy ended.
And now some more recent news from the CFZ Newsdesk


AND TO WHISTLE WHILE YOU WORK... (Music that may have some relevance to items also on this page, or may just reflect my mood on the day)
Posted by Jon Downes at 12:46 AM No comments: