Cryptozoology on the radio again


On Sunday night’s Morton Through Midnight show the regular cryptozoology feature Morton’s Mystery Creatures focused on the Prestwick sea serpent. It is perhaps the only truly mysterious stranding reported to have taken place in Scotland.

A tale is told that during the Second World War the body of a mysterious creature was discovered washed up on a sandy beach near to Prestwick airport in Ayrshire. 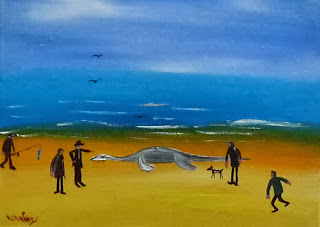 Following a storm, amongst the usual flotsam and jetsam washed up onto the beach, there was something a lot more interesting: the remains of a sea serpent. Unlike many a supposed sea serpent whose skeletal remains have been reported to have washed ashore this impressive find was not in an advanced state of decay at all but was actually fresh, the flesh being soft with no smell of decomposition to it.

The creature was lying flat on its belly with its long neck stretched out in front and a long tail behind. It was estimated to be between 12 and 14 feet in length with head, neck, torso and tail complete.
The head - around a foot long - was similar in size to that of a horse but was broader and flatter. There were big eye sockets from which the eyes had disappeared, presumably eaten by scavengers. Apart from that damage the head was still pretty much intact with working upper and lower jaws complete with teeth.

The neck was around 4-5ft in length and a fan-shaped track had been left in the sand where it had been washed to and fro by the tide.

The body was similar in length to the neck and was covered in a complete layer of muscle, skin and interestingly, a short fur similar to that found on seals. The torso was buried halfway into the sand and both the pectoral and pelvic girdles and joints showed where four flippers came out of the body. The flippers themselves lay buried in the sand. There was no sign of a dorsal fin but there was a mane running down the middle of the back.

The tail was said to be roughly the same length as both the neck and body at 4-5ft. It was described as being like that of a tadpole with a fin going all the way round it. This fin was in the process of breaking down into fibres that looked like the bristles on a broom. 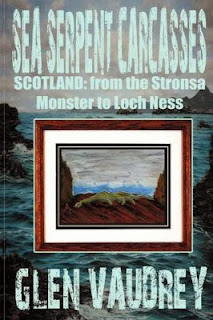 Local folk and fishermen who saw the remains couldn’t think of any known creature that it resembled. It was suggested that it looked like the remains of a prehistoric reptile, albeit a furry one.
After a while the body disappeared. Was it washed away or did it become covered by sand? Is it possible that some part of this mystery animal is still buried in the sand awaiting discovery on that Ayrshire beach?

If you want to read more about this stranding and others in Scotland you can find them all in my book Sea Serpent Carcasses Scotland: from the Stronsa Monster to Loch Ness, which is available in both paperback and kindle from Amazon.
If you are interested in owning my oil painting of this creature you can find it for sale on eBay;  a rare chance to buy one of my cryptozoological paintings.

You can listen to this tale on show on the following link morton through midnight .It is 1 hour 39 minutes 23 seconds into the show.

Posted by Glen Vaudrey at 11:51 AM No comments:

SAYBROOK TOWNSHIP — Debbie Sherman was driving home early Monday morning after a night of playing cards with friends when she saw something moving across the field.
At first, the Geneva resident could not make out the object.
“I thought it was a dirt bike,” she said. “Then I saw it was massive in size, standing on two feet .. and it was standing tall, really tall.”
Sherman said she saw a Bigfoot, also known as sasquatch, an ape-like creature that some people believe live in the forests of North America.
“I was driving west and it was on the north side of Route 20 before North Ridge Taxidermy,” she said, noting before this sighting, she didn’t really believe in the existence of Bigfoot.
“I was driving and he was coming sideways from me,” she said. “He was big and hairy and muscular. I slowed down, thinking we were going to collide, and all of sudden he was gone.”
Sherman holds a steady job, keeps to herself and her family, and was a little uneasy about coming forward with her Bigfoot story.

*  Jon Downes, the editor of all these ventures (and several others) is an old hippy of 54 who,  together with his orange cat (who is currently on sick leave in Staffordshire) and two very small kittens (one of whom is also orange), puts it all together from a converted potato shed in a tumbledown cottage deep in rural Devon which he shares with various fish, and sometimes a small Indian frog. He is ably assisted by his lovely wife Corinna, his bulldog/boxer Prudence, his elderly mother-in-law, and a motley collection of social malcontents. Plus...did we mention the orange cat?
Posted by Jon Downes at 4:24 AM No comments:

CRYPTOLINK: Article on correlations between bigfoot and orangutan vocalisations


Sasquatch vocalizations have been recorded from all over North America, but very little is known about what the creatures are actually communicating, or why they are doing so.  Perhaps now some light might be shed on this interesting question by studying another ape, the orangutan.

Researchers have now correlated the calls of male Sumatran orangutans with their directions of travel.  They observed females repositioning themselves to be closer to the male's line of travel, and also non-dominant males moving out of the way of the dominant males heading their way.

Richard Rohrberg didn't think he would find signs of Bigfoot while deer hunting in rural Harrison County on his mother's birthday.The 65-year-old Council Bluffs man – who has hunted the backwoods of southwest Iowa for 50 years – says he spotted what he believes is the creature's footprint Sept. 2 in the Loess Hills near Magnolia. An expert on Bigfoot sightings, however, believes the print is a collection of deer tracks.Rohrberg said deer don't visit the grassy creek where he spotted the footprint because it's too deep and narrow. The print didn't match anything the veteran hunter had ever seen in the Loess Hills.“There were no deer prints,” Rohrberg said. “It's not a deer. I guarantee it.”But Jeff Meldrum, an anthropology and anatomy professor at Idaho State University who has studied Bigfoot for 15 years, said the Great Plains area isn't a suitable habitat for a large primate. Most Bigfoot sightings have been west of the Rocky Mountains.The ambiguity and size of the single footprint would rule out any possibility of it belonging to Bigfoot, Meldrum added. Overlapping deer tracks with cloven hooves would most likely explain the “toe-like” appendages.

The hunt for British Big Cats attracts far more newspaper-column inches than any other cryptozoological subject. There are so many of them now that we feel that they should be archived by us in some way, so we are publishing a regular round-up of the stories as they come in. In September 2012 Emma Osborne decided that the Mystery Cat Study Group really deserved a blog of its own within the CFZ Blog

Q: What is the difference between a lawyer and an angry rhinoceros?
A: The lawyer charges more.

And now for a happy tune that you can whistle while you work:
Posted by Jon Downes at 2:23 AM No comments: