Taking advantage of the improved and newly launched British Library online newspaper archive, (in which I`ve found about 6 new odd animal stories from the Manchester and Lancs area for Lizzy and my forthcoming “ Mystery Animals books”) I found these two Victorian stories (amongst others) on day 1 of my 2 day £7 search:

CAPTURE OF A STRANGE FISH NEAR FRODSHAM *

Two Warrington men – William Mather and John Smith – whilst netting in the river Weaver near Frodsham, a short time ago, came upon a monster which is rarely seen in this country, except in some parts of Ireland and Scotland, and on the coasts of Cornwall, Devonshire, Norfolk, and Yorkshire. It was the Devil-fish ( the Lophius piscatrix of Linnaeus and Cuvier) sometimes called the Angler, from a very curious propensity which it has of decoying fishes into its capacious mouth by means of long slender appendages situated upon its head. The first of these is broad and flattened towards the end with a shining, silvery appearance at its dilated part, is curiously articulated, and capable of great freedom of motion. Naturalists state that, while couching close to the ground, the fish, by the action of its ventral and pectoral fins stirs up the sand and mud: hidden by the obscurity thus produced it elevates its appendages, moves them in various directions by way of attraction as a bait, and small fishes approaching either to examine or to seize them immediately become the prey of the fisher. Numerous writers have borne their testimony to this habit. The fisher caught in the river Weaver was about four feet long, and weighed probably a hundred weight. Fourshilling pieces of the reign of George III [*2] , were said to have been found in its gills. (1)

And now a story from down our Dear Leader`s way (J.D. I mean) A statue of whom is shortly to be erected in both Exwick,Exeter and Pyongyang, N.Korea.

A few days since Mr Blackmore, plumber, of Sidmouth, was employed to discover why no water passed through a pipe leading to the hot and green houses at Peak House. The pipe was sound, without a fracture, and seemingly air tight. On cutting it he found a large eel 21 ½ inches long, and 4 ½ inches in circumference, wedged in the pipe, which was only of one-inch bore. The strainer at the end of the pipe having fallen off, the animal had evidently wriggled itself inwards as far as possible, and then died, fitting the pipe like a cork. That was remarkable enough, and so Mr B thought; but when he returned on the following morning to complete his job, he found a second eel, one of 11 ¼ inches long, in exactly the same position. But the strangest part of the affair is the fact that the water in which these eels have been nurtured comes direst from springs in the high hill at the back of the house, from Muttersmoor, nearly 500 feet above the level of the valley and the river, with which there is no water communication whatever to be seen. How did the eels get to the springs? – Sidmouth Journal. (2)

How indeed? Would anyone care to follow this one up with me?

Richard-o
Posted by Jon Downes at 12:33 PM No comments:

On this day in 1970 the actress Jennifer Connelly was born. She has starred in quite a few films of Fortean note, including Labyrinth, Phenomena, Dark Water and The Day the Earth Stood Still.

Nearly as good as ‘The Laughing Gnome’:
http://www.youtube.com/watch?v=olWEXcIUX-I

We did a computer swap with a local Bigfooter on Saturday, with a consequence that we lost some data and that the new computer is not quite manageable yet. We had to work around that and do some rescheduling. I was able to get out the next blog posting at the Frontiers of Zoology, though: 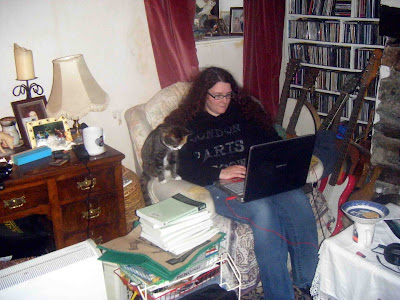 WHAT THE BLOODY HELL IS GOING WRONG?

In the last ten days we have lost seven aquarium heaters, that have suddenly ceased to work for no apparent reason. It seems unlikely that they have failed from a common cause, because they have been in three different locations: The conservatory, my study, and the tanks that we maintain in the village pub. The most recent was found in the pub yesterday with a damn great crack in it. So far we have lost no fish, but it is only a matter of time. Any ideas?
Posted by Jon Downes at 10:09 AM 1 comment: