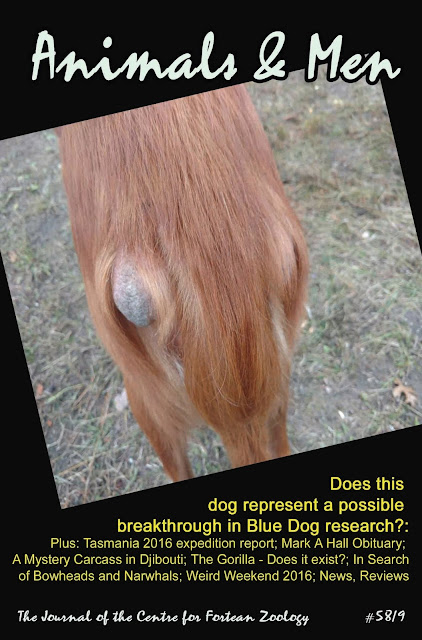 Bigfoot Investigator Has A Close Call
Bigfoot Evidence
There are all kinds of dangerous situations lying in wait while one is out looking for sasquatch, but we're willing to bet Ohio bigfoot hunter Tim Stover ...

Bigfoot Researcher Talks About Encounters On The Navajo Reservation
Before It's News
The four corners area has a long history of bigfoot sightings and encounters. In this episode of Bigfoot Crossroads, Fred Eat talks about his research ...

Weird Bigfoot Stories
Bigfoot Evidence
Short video looks at three cases including a sighting of a Bigfoot in an area frequented by clothing optional folks, a Russian case in which a Bigfoot ...

Bigfoot Encounters Gone Bad
Bigfoot Evidence
People go missing into the wilderness every year. Are some of those missing persons the victims of a bad bigfoot encounter? Things in the wild can ...
Posted by Jon Downes at 4:35 PM No comments:

Daily Mail
A Tasmanian tiger, or thylacine pictured in captivity, circa 1930. The last known thylacine was kept in a zoo in Hobart from 1933, dying just three years ...

Tasmanian tiger sightings: 'I represent 3000 people who have been told they're nuts'

The Guardian
Two thylacines, also known Tasmanian tigers, in captivity before their species was declared extinct in the 1930s. Photograph: AFP/Getty Images.

Is this proof the Tasmanian Tiger is NOT extinct? Mysterious creature caught on camera has the ...

Daily Mail
The last of the species, otherwise known as thylacine, is thought to have died in 1936 but people continue to report sightings from across Australia.
Posted by Jon Downes at 4:30 AM No comments:

ON THIS DAY IN - 1431 - In Paris, Henry VI of England was crowned King of France.
And now some more recent news from the CFZ Newsdesk