The Siver Times
American tourist Dakota Frandsen of Idaho recently arrived in Scotland to spend their holidays. During a visit to Urquhart castle (Urquhart), which is located on the banks of the famous Loch ness, the woman saw how the water moves something dark and massive, according to the Chronicle.info with ...
Posted by Jon Downes at 12:18 PM No comments: 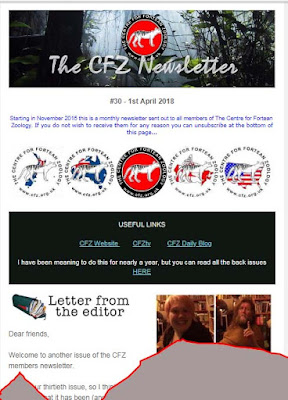 For those of you not in the know, at the beginning of each month we send out a newsletter to all members of the CFZ. The most recent (which went out yesterday afternoon) included articles on OTT, robot wolves in Japan, a flying porcupine, a mystery bird, Hong Kong countryside, ongoing arguments, Patreon, a new book on vampires, Notes and Queries etc.

If you want to view a sample issue click here: http://tinyurl.com/pw7rw9l
Posted by Jon Downes at 12:00 PM No comments:

ON THIS DAY IN - 1513 - Spanish explorer Juan Ponce de Leon sighted Florida. The next day he went ashore.
And now some more recent news from the CFZ Newsdesk