KARL SHUKER WRITES ABOUT THE IRISH MASTER OTTER IN SCOTLAND..

http://karlshuker.blogspot.com/2011/02/irish-master-otter-in-scotland.html
Posted by Jon Downes at 12:52 PM No comments:

ROBERT SCHNECK: This is not a squid

I've heard it a hundred times: where can I go to see some good squid art?


The answer is here:
http://www.squidoo.com/mosa-museum-of-squid-art 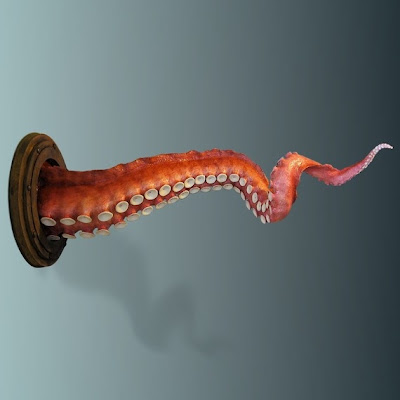 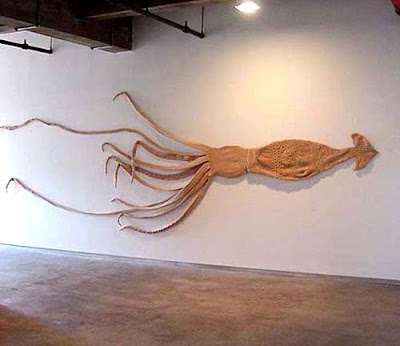 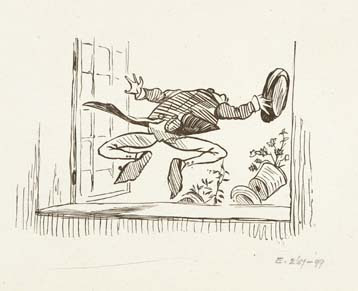 The point is that this sort of incident has happened not just once, but scores of times. I'm aware of at least two dozen such tales from Tyneside and Wearside alone. There are a number of points that need addressing regarding such events, so instead of simply rattling off yet another Frog Jumps Out of Rock story (although I will refer to one in just a minute) I'll cut straight to the chase and get to the heart of the issue.

On the morning of Wednesday, April 18 1827, several workmen were engaged in their duties at Fulwell Quarry, Sunderland. At some juncture they happened upon a large block of limestone that needed transporting to another place, the exact location of which I haven't been able to determine. The problem was that the boulder was simply too large for them to lift onto the cart. By employing the creative genius for which we Geordies are known across the globe, they figured that if they split the rock into two, each piece would weigh only half of the original, and that lifting two smaller boulders onto the cart would be infinitely easier than hoisting up one big one.

And so they set about the boulder with their sledgehammers, and eventually cleaved it into two pieces. Now I know what you're thinking: a frog jumped out of the remains of the boulder, right? Wrong. What jumped – or rather slithered – out of a recess in one part of the rock was a 5-inch-long snake with “a brown back and a freckled belly”. Five inches isn't incredibly big for a snake, but there again, if you'd been trapped inside a rock since the Triassic era you'd probably have lost a bit of weight yourself. I know I would.

Anyhoo, here are the knotty issues – and questions - as I see them.

1) How can an animal be encapsulated in rock, which, presumably, must have been molten when the event occurred, without being fried to a crisp?

2) In the event that such a thing is possible, how could the animal survive for hundreds of thousands, if not millions, of years without food, water or air in anything but negligible amounts, if any at all?

3) If the above two points make such an event impossible, how have so many people reported being witnesses to them?

4) If it is physically impossible for a creature to be encapsulated in rock in such a manner, then what other explanations are available? Are all the witnesses lying? A ridiculous suggestion. Are they all mistaken? That's hard to imagine, as the cavities from which such animals have emerged often fit their body shape and size perfectly, and are hard to explain away if the animal in question was never inside the cavity in the first place.

If you'll excuse the pun, we're caught between a rock (with or without a beast incarcerated in it) and a hard place, for on one hand the events as described seem impossible, whilst on the other the sheer volume of witness testimony makes them hard to deny. 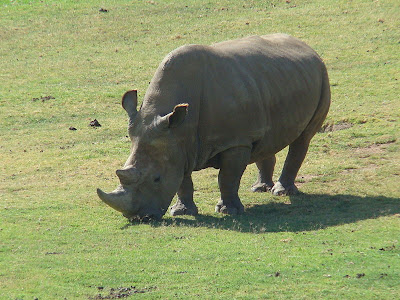 The rarest of all the rhinos, the northern white rhino (Ceratotherium simum cottoni), believed to be functionally extinct, are now mating. The species, once found across central Africa, is now thought to be extinct in the wild. The last individuals, in Garamba National Park, have not been seen in several years and are feared dead.
Two animals live at San Diego Wild Animal Park and until recently six lived at Dvůr Králové Zoo in the The Czech Republic. These were thought too old to mate. Four of the six were translocated to Ol Pejeta Conservancy in Kenya in December of 2009. The animals have surprised conservationists by mating. The first mating was between Fatu and Suni, both former residents of Dvur Kralove Zoo. The second mating was Sudan - the oldest northern white male - with a southern white known as Aramiet.

The southern white rhino (Ceratotherium simum simum) the largest and least endangered rhino was once reduced to around 15 individuals in one valley in South Africa. Now 17,480 animals live in the wild.
Posted by Jon Downes at 12:37 PM No comments:

Email ThisBlogThis!Share to TwitterShare to FacebookShare to Pinterest
Labels: rhino

BUTTERFLIES ON THE BEEB

You all know about my obsession with butterflies. According to the BBC's Natural World programme, kindly sent to me by Richard Freeman, they are a British obsession. You only have four days left to watch it so....

Check it out on I-Player
Posted by Jon Downes at 12:35 PM No comments:

On this day in 1937 the world's first flying car Waterman's Arrowbile had its first successful flight.
And now the news: