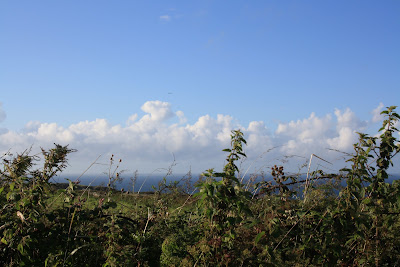 Took a photo the other day at Tintagel church on the 18th at about 6.30pm. Not sure what I've got in the picture; sent a copy to John Hanson. The reason I'm emailing you is could you take a look at the fuzzy blob in the sky on the photo and let me know if it looks like any insect or any other little beastie you may know. I am not very good at identifying insects; it was quite windy that evening and it was blowing in from the sea if that helps. When I took it, there was nothing in front of the lens or me.

I hope you can take a look and let me know if it’s some sort of creature you can identify.
Posted by Jon Downes at 12:29 PM No comments: 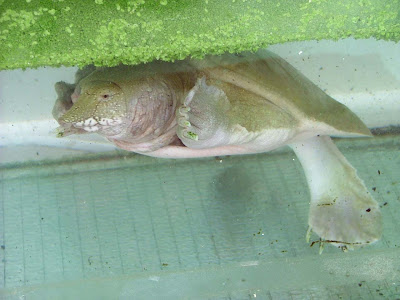 Sadly, Flump III, the third of the CFZ Chinese softshell turtles died yesterday of unknown causes. We shall not be replacing her, at least not until after the winter.


She will be sadly missed.
Posted by Jon Downes at 12:20 PM No comments: 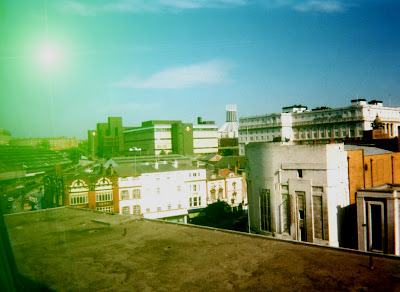 This is the 44th Geordie Monsters blog, and therefore a time to celebrate. 44 is a very special number in the Hallowell family as it represents the greatest number of consecutive summonses we received for non-payment of Council Tax before actually being prosecuted.

I recently promised Mr Downes – also known in some quarters as The Great Evil One, although this is somewhat exaggerated – that I would do my best to pen a number of blogs on the "Imp" theme, which is proving to be quite popular.

In the Nation of Geordieland, Imps were quite popular at one time, and were known to inhabit more rural locations in Northumberland, although they would also visit urban settings if the mood took them. Geordie Imps were neither wicked elementals nor paragons of virtue; they were somewhat like human beings, manifesting a wide range of personalities and demeanours. Generally, they had a reputation for being mischievous and in the north of England today it is not uncommon to hear adults refer to precocious youngsters as "cheeky imps."

One of the pranks Imps would engage in – and still do, I reckon – was to waylay travellers and confuse them regarding their surroundings. This was also a favourite pastime of pixies, which led to the phenomenon being referred to as "pixie-led" by some. Those who found themselves "pixie-led" or "imped" would suddenly realise that they had no idea where they were or how to get to their destination. They would wander around in a daze until the imps tired of the game and set them free.

Now this party-trick of the imps sounds like a quaint piece of folklore, but it isn't. Being imped or pixie-led is a real phenomenon. I have spoken to people who have experienced it and wouldn't you know, it actually happened to me once.

As I recall, several years ago a number of correspondents wrote in to the Fortean Times with similar tales. If my memory serves me correctly, one reader detailed a very strange experience indeed. The reader’s friend had got lost in a park on her way to an appointment and turned up twenty minutes late in a rather distressed state. There is nothing inherently strange about this, except that the park was only one quarter of a mile long and one eighth of a mile wide. How can someone become lost in such a small area, particularly one they are familiar with? Quite easily, it seems.

My own experience occurred some years ago. I used to be a member of the Board of Directors of The Weston Spirit, a charity founded by Simon Weston the Falklands veteran. The charity had its head office in Liverpool and once a month I'd journey down for meetings. I normally had a few hours to kill before the meeting started and would often take the opportunity to stroll around the city centre. One of my favourite places was Bold Street, a long stretch of shops which has great character. I used to love walking up and down the street, taking in the sights and sounds of bustling pubs, grocery stores, Asian supermarkets and "everything for a pound" outlets. There is something truly magical about Bold Street.

On one occasion I walked down to the bottom of the street and then retraced my steps on the other side of the road. Now, Bold Street is a street of considerable size but for some reason it seemed to be taking an inordinate length of time to get back to the top. I kept walking but weirdly, didn't seem to be getting any closer to where I wanted to go. At first I just passed this off as my imagination but after several minutes I knew that something was seriously wrong. I was passing the stores one by one but the end of the street stayed as far away as ever.

I decided to have one more try. I would walk briskly towards the top of the street. If within, say, two minutes I was no closer to where I wanted to go, I would turn around and walk back-over in the hope that this may break whatever bizarre spell had captivated me. At first nothing seemed to happen and then, suddenly, everything returned to normal. Before long I had left Bold Street and was heading back to my hotel. Back in my room I had a sudden urge to photograph the city centre in the direction of Bold Street from the window. I don't know why. There is nothing unusual about the picture but the urge to take it was so overwhelming to this day I can't explain it. I've attached it to this blog anyway.

Cases like that above are not rare. I investigated one myself several years ago in which a man also said he could not find his way out of a long street of shops. No matter which direction he went in, he kept finding himself back in the middle facing the other way. It’s easy to laugh at stories like this but Eric Wilson was genuinely traumatised by his experience:

“I started to sweat and my heart was pounding. I wasn’t imagining this. It was a good fifteen minutes before I reached the other end. It was just crazy. I kept walking, but the end of the street got no closer. I was in a real panic.”

I know others who have been "imped" or "pixie-led" in this way. Two members of a paranormal research group I once belonged to visited a remote spot in rural Northumberland that by tradition played host to an entrance to the subterranean Northumbrian Elven Kingdom. They hoped to find it but did not, which sceptics will not find surprising. However, at one point they climbed to the top of a small mound and suddenly found themselves with absolutely no idea where they were. This was odd as the car they'd arrived in was clearly visible no more than 150 yards away. Discomfited by this odd sensation of being lost, even though they really weren't, they decided to head back to the car. And that's when the trouble started, for no matter how far they walked the vehicle never seemed to get any closer. Concern turned to panic but then, without warning, the sensation left them as quickly as it had came. They vowed never to go back to that spot again.

There is an old legend that those who find themselves "imped" or "pixie-led" can reverse the process by removing their coat or jacket, turning it inside-out and putting it on again. This, allegedly, confuses the imps who can no longer recognise their victim, and the spell is broken. I'd be interested to hear from anyone who has been imped, particularly if they tried this remedy. I'd love to know if it worked.

Whether this phenomenon is really precipitated by pixies or elves, or is explicable by more prosaic notions, I do not know. However, I truly believe it exists.

Inebriated Forteans who are having difficulty finding their way home from the pub could always try turning their jackets inside out, but I make no claims that it will work and the act may draw the attention of Her majesty's constables, who, imp-like, could well offer you alternative accommodation for the evening….
END
Posted by Jon Downes at 12:16 PM 1 comment:

THIS VIDEO TELLS US MORE ABOUT FORTEAN INVESTIGATION THAN MOST

On this day in 2007 Alex the parrot died. If you're wondering why a single parrot is significant enough for me to use him for today's anniversary then you probably should read his article on Wikipedia; it is interesting stuff: http://en.wikipedia.org/wiki/Alex_(parrot)
And now, the news:

Maybe they should set their spider-bots on them.
Posted by Jon Downes at 12:07 PM No comments:

THE DEVIL WENT DOWN TO SMETHWICK

According to Karl Shuker and Nick Redfern that is, and I wouldn't wish to argue with either of them....
http://karlshuker.blogspot.com/2010/09/devil-of-mystery-from-smethwick.html
Posted by Jon Downes at 12:06 PM No comments: