From CFZ Australia:
Banjo the koala's back where he belongs
Meet the Cryptozoologist: David Hatcher Childress
Published with Blogger-droid v1.6.9
Posted by Andrew May at 8:28 PM No comments:

Email ThisBlogThis!Share to TwitterShare to FacebookShare to Pinterest
Labels: Andrew May, cfz australia

Here is the first draft poster for this year's event.

Sadly, Alan Murdie has had to pull out because the WW clashes with another conference he is attending... in Brazil.

We have also lost Paul Vella because of a conflict with a family occasion.
Published with Blogger-droid v1.6.9
Posted by Jon Downes at 1:05 PM No comments: 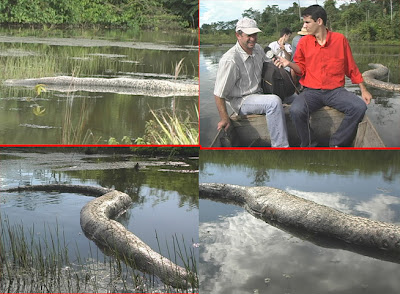 Whilst pootling about on the internet I came across the following anaconda-related stories.

The first involves a 30-foot or nine-metre specimen found floating dead in a lagoon eight kilometres from the town of Matupá in the state of Mato Grosso in Central Brazil. It had apparently swallowed a capybara before dying. 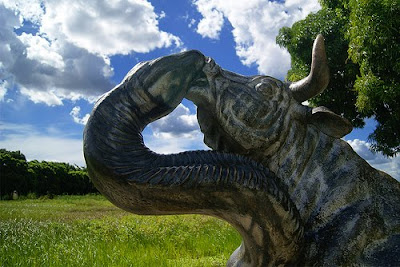 The second story I stumbled on concerns a spectacular statue I had never before seen. The statue shows a giant anaconda fighting a bull. Giant anacondas were sometimes called Manatoro or bull-killers as they were thought to over-power, constrict and swallow whole bulls. The sculpture represents man’s attempts to interfere with the course of the São Francisco River in Brazil. The anaconda represents the river and the bull, modern man’s interference. It´s a work of art by Diocleciano Martíns and it was inspired by a poem by Castro Alves. In the poem The Waterfall, the bull represents the rock, the force; the anaconda, the waters in coil, breaking the rock, from there appearing the great waterfall. The Paulo Afonso Dam was built in 1955. The hydroelectric plant now provides electric power for the whole of north-eastern Brazil. Four other large hydroelectric plants were later built. : Três Marias built in 1961, Sobradinho Dam in built in 1977, Luiz Gonzaga (Itaparica) and the and the Xingó Dam built in 1994. The Sobradinho reservoir is one of the largest artificial lakes in the world, with an area of 4,214 square kilometers and almost certainly harbors large anacondas.

The carranca is a type of carved gargoyle that was once put on the prows of boats traveling along the São Francisco to scare away evil spirits. Legends of water monsters persist to this day and may be based on giant anacondas.
Published with Blogger-droid v1.6.9
Posted by Jon Downes at 1:02 PM 1 comment:

James, an old friend of the Downes family and (more recently) the CFZ, is gravely ill.
Remember him in your thoughts and prayers to whichever deity you believe in.

Published with Blogger-droid v1.6.9
Posted by Jon Downes at 12:52 PM No comments:

http://hauntedskies.blogspot.com/2011/05/bunniessuperwomanbananaman-nigel-and.html
Published with Blogger-droid v1.6.9
Posted by Jon Downes at 10:14 AM No comments:

On this day in 1931 Marshall Applewhite was born. Applewhite was the leader of the Heavens Gate cult that committed mass suicide believing that if they did this then an alien spaceship travelling in the wake of the Hale-Bopp comet would pick them up and save them while it recycled the Earth.
And now the news:

Mmm, crunchy:
http://www.youtube.com/watch?v=ZwTHVZHqSb0
Published with Blogger-droid v1.6.9
Posted by Jon Downes at 10:13 AM No comments: