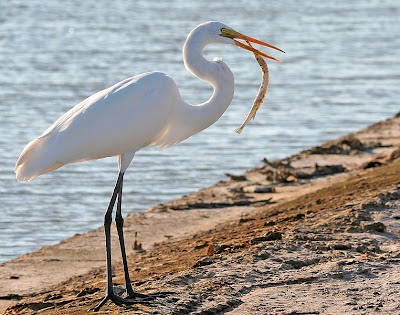 It’s been announced within the last couple of days that the great white egrets at Shapwick Heath in Somerset are nesting and appeared to have bred.

* The little egret was once a British breeding bird, but hunting, and particularly the demand for the long white feathers that adorn the male in the breeding season (aigrettes) which were particularly prized for centuries by the more exclusive milliners, led to it disappearing as a British breeding bird centuries ago. They started re-colonising during the 1990s and bred in the UK for the first time in 100s of years in 1996.

* The cattle egret is a completely different kettle of fish (or kettle of egrets if you prefer). Until the 1950s it was mostly an east African species found in small numbers in southern Europe. Then for reasons that are still obscure it had a massive expansion of its range and is now found over much of the tropical and temperate world, reaching as far away as Australia and Fiji. I have seen them in Canada, the United States, Hong Kong, Puerto Rico and Mexico, and my late mother – who was very much a lady of her time – refused to believe me. As far as she was concerned, they were purely an African species. They bred for the first time in the UK in 2008.

* The great white egret is an even more recent visitor to these shores, and the range expansion of this species seems to have followed a far more conventional pattern than that of the former cattle egret. Now this too is breeding here.

This is all very interesting not just because of the three different methods by which the egret came to Britain but because our very own Max Blake predicted that the great white egret would be a breeding bird very soon after photographing one (quite possibly the same breeding female) at Shapwick Common in 2009. Good eh?

I found this on the Hong Kong history site `Gwulo`:

A random photo from this page reminded me of a temp job I had in the early 1990s, working for an Australian company in East Kowloon. Basically we worked overnight for several months, lifting every sewer cover in a square kilometre radius, photographing the contents on Polaroid and recording the condition with mirrors on poles. A few of them we visited every night, as they had monitors inside that we connected to a laptop and uploaded the data. Some of the stuff we saw was pretty nightmarish - big eels washed back from the harbour, and other writhing creatures. We had to close up and go home around 6am, just before the public housing estates began flushing en masse.
Posted by Jon Downes at 1:17 PM No comments:

DALE DRINNON: Despite all the problems, an episode of Cedar and Willow gets through

Finally got through one of those delinquent blog postings at Cedar and Willow:
http://cedar-and-willow.blogspot.com/2012/05/viking-women-meet-hercules-not-original.html

(There are problems with pending blog entries for FOA and FOZ and they shall have to be rebuilt)
Best Wishes, Dale D.
Posted by Jon Downes at 12:33 PM No comments:

Welcome, once again, to the weekend. And we have all sorts of jolly stuff for you, kicking off with some exclusive pics from the first show on Hawkwind's current UK Tour - last night in Bridport.
http://gonzo-multimedia.blogspot.com/2012/05/huw-gives-it-some-acoustic-wellie-by.html

According to this video, it appears that the current Roger Waters tour will be his last:
http://gonzo-multimedia.blogspot.com/2012/05/latest-news-from-roger-waters.html

In the wake of his fabulous Rick Wakeman biography, author Dan Wooding catches up with the Gonzo grande fromage at Heathrow:
http://gonzo-multimedia.blogspot.com/2012/05/rob-and-dan-wooding.html

And finally video of a peculiar chat between our very own Merrell Fankhauser and veteran rock pianist Nicky Hopkins:
http://gonzo-multimedia.blogspot.com/2012/05/merrell-fankhauser-meets-nicky-hopkins.html

See you tomorrow, when - being sunday - the notifications will be in some semblance of rhyme...
Posted by Jon Downes at 12:32 PM No comments:

On this day in 1971 Matt Stone, one of the co-creators of South Park, was born.
And now the news:
Water Pollution Caused by Birth Control Poses Dile...
Ancient walking mystery deepens
First population census of Critically Endangered p...
Pollution-hunting robot fish take to the sea
Scientists seek big genes of bigfoot
South Africa: 210 Rhinos Killed in 128 Days
Top 10 New Species Revealed By Scientists - via Si...
Lake monster not the only mystery in Alaska's Lake...
Octopus Foils Predators by Stealing Identities
Beyond the Tyrannosaur: Other Auction Specimens Al...
How whales open their huge mouths

South Park does cryptozoology:
http://www.southparkstudios.co.uk/clips/sp_vid_411539/?tab=featured
Posted by Jon Downes at 12:29 PM No comments:

Today we notched up the 9,000th posting on this blog alone. I think a round of pattings on the back, and maybe the odd lemonade are in order...
Posted by Jon Downes at 11:18 AM 2 comments:

Ecija´s monster river, 1955
All information in :

The quaintly-named gooseberry wife is a giant hairy caterpillar said to lurk amid gooseberry bushes on the Isle of Wight (situated off Hampshire, southern England), lying in wait to devour unruly children hoping to steal the berries. Having said that, you will no doubt be relieved to learn that this daunting creature is no more real than any other imaginary bugbear invented by exasperated parents to deter their errant offspring from doing what they shouldn’t.