I wrote to Naomi last night, and asked whether there was any more news. She replied:

This creature is more elusive than I originally thought. I have tried all kinds of different ways to capture it on film, even just get a glimpse of it with the naked eye. I thought for sure I saw it sitting by the puddle yesterday, but when I reached the puddle, there was no trace of it. There was, however, dirt stirred up at the bottom of the puddle, which tells me it – or something – had recently leaped in. My dog Salem made a lunge for it, but I grabbed her just in time. No telling what could have happened.

One interesting thing I’ve noted is that there are never any bugs around the puddle, none whatsoever. I take it that the energy from this -- whatever it is – frightens them off.
I contacted a research team to conduct an investigation using sonar and underwater photography. They arrived this morning, but left after discovering their equipment was too large to fit in the valve box.

My brother, whom I haven’t even told about the monster, was walking past the valve box yesterday when he accidentally dropped some change into it. Before I could even get the door open to warn him, he reached into the valve box, fished the change out, and walked on. It was one of the most astonishing things I’ve ever seen. I asked him if he’d seen or felt anything in the water, and he said no. It makes me wonder if, perhaps, this creature can slip in and out of another dimension….

I tried soliciting the help of my next-door neighbour, thinking that since she has lived here so long she might have heard of the puddle monster. But when I mentioned it, she looked fearful, crossed herself, and shut the door in my face. So now I’m working on getting a 20-person expedition underway to investigate the valve box further. For now, the mystery remains.

I don't know why the ongoing saga of this elusive batrachian is so gripping. But it is....
Posted by Jon Downes at 8:24 PM 4 comments:

Published with Blogger-droid v1.7.2
Posted by Jon Downes at 3:05 PM No comments: 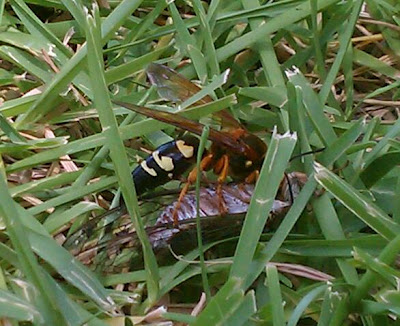 This is a pic taken by my friend Dana of a "Cicada killer" hornet killing a Cicada. Dana saw the hornet attack the Cicada and managed to get a pic.
Posted by Jon Downes at 3:01 PM 1 comment:

DAVEY C: IT COULD ONLY HAPPEN IN SEAHAM 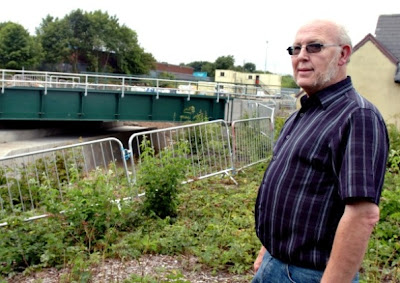 Here is an unfortean but funny bit of nonsense for you that could only happen in Seaham I have entitled.....

In a bid to rid the railways of manned signal boxes, the rail bosses decided to build an underpass next to Seaham rail station so people can move freely without having to rely on the signal man to open and close the gates when a train passes by. So far, so good.

The tunnel was cut and almost completed when the engineers hit a snag. There was the small problem of a newsagents shop and an Ebeneezer Gospel Church in the way! For some reason, best known to themselves, the rail bosses neglected to buy the aforementioned buildings and now the digging has come to a standstill.

“This is costing us money” a spokesman for the rail company grumpily said. “and the building contractors may have to stand down until this is sorted!” Indeed.

The local rag the Sunderland Echo had this to say..

'THIS is the tunnel to nowhere – thanks to a stalemate between landowners and rail chiefs.Worshippers at Seaham’s Ebenezer Evangelical Church turned up to a Sunday service to find workers clearing its land to make way for the tunnel from Station Road to Harbour Walk, beneath the town’s railway line. A mix-up over the plot’s ownership was caused by a map produced by a third party, which stated the town council was the land owner. But the church, which is the true owner, has not sold the site to Network Rail, causing an impasse between the parties and a pathway which only leads to a dead end.Church bosses are said to be considering a second, higher offer for all of its land, while Seaham Town Council has turned down permission to take the route through its own neighbouring plot, which links to the old mineral line pathway.

Council members fear a repeat of issues caused at the new bridge crossing at the town’s Princess Road, which has left those with pushchairs, wheelchairs or mobility scooters facing a diversion.Clive Todd, who runs a newsagents next to the station, said: “I’m not against the tunnel, we’ve got to accept the fact we have to provide disabled access.“They cannot build a path at the end of the tunnel now – it comes out to nothing. It’s a right botch up.”

Richard Whiteman, one of the trustees of the church, which has stood on Harbour Walk since 1971, said: “We are in discussions with Network Rail about what they are going to do about it, but the fact is we own the land and we’ve got a solicitor on the case.“We have the opportunity to improve the look of this area as a gateway to the town.”

The issue has been taken up by Durham County Councillor Dan Myers, who said: “We want to make sure the general public get what’s best for the community.“This is going to last for 60 to 70 years and we need to get it right now.”'

A spokeswoman for Network Rail said the halt to works was costing it thousands of pounds and added: “Unfortunately, as yet, no arrangement with the church has been possible and as of this Friday, the contractor will be standing down until the situation can be resolved.”

I like Councillor Dan's quip that "we have to get it right now". Tee hee.

YOU, TOO, CAN BE WALTER POTTER - Bespoke Freakshow taxidermy. 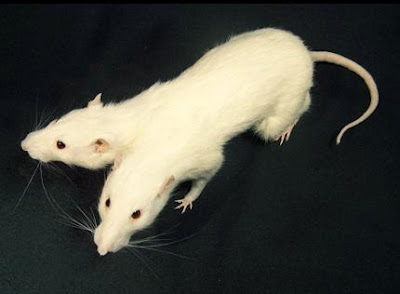 http://www.customcreaturetaxidermy.com/Site/SIDESHOW.html#grid
Posted by Jon Downes at 12:21 PM No comments:

http://hauntedskies.blogspot.com/2011/07/source-material-hampshire-1995-part-two.html
Posted by Jon Downes at 12:19 PM No comments:

On this day in 1911 Hiram Bingham 'rediscovered' Machu Picchu. After he announced this rediscovery though many came out of the woodwork and claimed to have found the lost city before Bingham, including Brit Thomas Payne.
And now the news:

Bet they don't mention this though:
http://www.youtube.com/watch?v=UXHwIrEpeSQ
Posted by Jon Downes at 12:18 PM No comments:

REGAN LEE ON THE BLUE DOGS 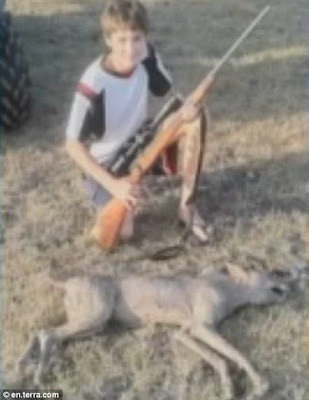 I have an article up at Monster Tracker about yet another poor hairless and unusual creature killed because the shooter -- a 13 yr. old -- thought it might be "chupacabra."

Fear of the Unknown: Another Hairless Creature Killed

Interesting how the lore has changed, from the red eyed, spine backed, clawed, "alien looking" creature that could jump quite high and suck blood from goats, rabbits, chickens, etc. to a canine type animal with mange. Or, as I point out in the article, maybe these animals are hybrids, some new breed of something -- but the evolution of the lore surrounding chupie is interesting. As is the quickness to shoot and kill said unknown.
Posted by Jon Downes at 12:12 PM No comments:

CFZ NEW ZEALAND: a peek behind the scenes with Tony Lucas