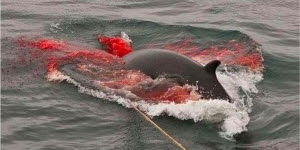 Frozen in Time - How Modern Norway clings to its whaling past (Ocean Care)
https://oceancare.org/wp-content/uploads/2016/07/Report_Walfang_OC_AWI_PW_Frozen-in-time_EN_2016.pdf
Posted by Jon Downes at 12:22 PM No comments:

Bigfoot Evidence - blogger
The Rocky Mountain Sasquatch Organization is on the road again, traveling through another bigfoot sighting hotspot area. Will they capture anything ...

'All of a sudden I have these sets of red eyes looking at me': Man claims he encountered a FAMILY ...

Could Tasmanian tigers be living in the wilds of Queensland's Cape York Peninsula?

ABC Online
Scientists are all but certain thylacines — Tasmanian tigers — were extinct on the Australian mainland by the time European settlers arrived, but as far ...

The Tasmanian tiger looks like a cross between dog and cat

Newcastle Herald
So perhaps we relate to the thylacine more than other extinct or near-extinct creatures because of its feline and canine characteristics. At the very least ...
Posted by Jon Downes at 1:30 AM No comments:

ON THIS DAY IN - 1457 - Gutenberg Bible became the first printed book.
And now some more recent news from the CFZ Newsdesk