Dr Karl Shuker looks at the 19th century painter Paul Gauguin and his representation of the koao.

http://karlshuker.blogspot.com/2011/11/gauguins-magical-mystery-koao.html
Posted by Jon Downes at 11:18 AM No comments:

Greenland is as big an island as they go being the biggest one that isn’t a continent. It’s an autonomous country within the kingdom of Denmark. Despite the impressive size of the island around 80% of its surface area is covered by a great ice sheet which means that settlement has taken place around the fringes of the island, and it is from one of these little settlements that the report of today’s cryptid comes.

Officially the Great Auk became extinct in 1844 when the last known birds met a grisly end on a small island off the coast of Iceland. However, extinct or not, that didn’t stop further sightings being reported, in 1888 four birds were seen standing on a rock in a little group of islands to the south of Disko Island called Kronprinsens Ejlande. But there has been one further sighting of more recent date which took place in the 1920s and which resulted in the bird not only being caught but being served up for tea.

Next stop Iceland.
Posted by Jon Downes at 11:07 AM No comments:

New on Cedar and Willow - a feature about Nancy Carroll:

http://cedar-and-willow.blogspot.com
Posted by Jon Downes at 11:03 AM No comments:

NEIL ON THE SUBJECT OF HIS NEW BOOK 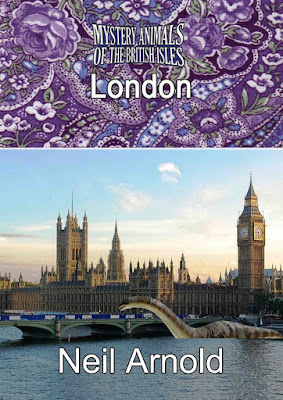 MYSTERY ANIMALS OF THE BRITISH ISLES: LONDON
A Book By Neil Arnold

Roll up, roll up! For the monster mystery tour, step right this way. Read all about it, read all about it, panic on the streets of London!
For many centuries the streets, sewer systems, skies, waters, and darkest corners of the capital have been inhabited by strange creatures. Some folklore, some fact.

MYSTERY ANIMALS OF…LONDON, a new, richly illustrated, fully indexed 385-page volume written by full-time monster hunter Neil Arnold, published by CFZ Press, is a unique surreal safari through the concrete jungle of London, which explores a menagerie of the strange, creatures cast from the Ark, half-hinted and yet persistent in their presence.
Recoil in horror at tales concerning elusive ‘big cats’ on the prowl through London’s leafy suburbs, with yarns pertaining to the ‘beast of Sydenham’, the lioness of Winchmore Hill, the Edgware tiger, and the classic Surrey puma - a long-lasting mystery which Neil proves may well have its origins centuries previous to the 1960s flap which made national headlines.
And then there are the abominable animals said to lurk in the depths of the River Thames and other London rivers, ponds and lakes, from tales of alligators, crocodiles, piranha, snapping turtles and even sharks, to grim legends of monster rats, slithering snakes and serpents.
And don’t forget the aerial oddities, with weird tales of giant birds in the skies over London – eagles, parakeets and monstrous griffins and dragons.
MYSTERY ANIMALS OF…LONDON looks at creaky old tales of animals escaping from private menageries, zoo parks and circuses. And then there are the monsters of the mind, for instance, the case of Hampstead’s phantom ape, the spectral bears of Chelsea, frothing hellhounds at Newgate, a ghostly chicken…yes, you read it correct! And who could forget the ripping yarns pertaining to mermaids, Spring-Heeled Jack, glowing lions, flying jellyfish, birds of death, the London Underground man-beast, the Stratford Goatman, fairies, hellish horses and the case of the Highgate ‘vampire’.
An essential read on a foggy night for any monster-hunter, historian, paranormal enthusiast or general fan of the macabre and the mysterious.

Priced £15.00 from Amazon and all good book shops, MYSTERY ANIMALS OF THE BRITISH ISLES: LONDON, where the wild things are…dare you venture forth on this expedition of the extraordinary and lift the lid on London’s ludicrous and most devilish denizens ?

WHEN COMMAS WERE RARE

My appeal for volunteers during the keynote speech at this year's Weird Weekend was answered by an enthusiastic young couple Tim and Graidi Taylor-Rose. Every other Sunday they wind their way to Woolsery and do CFZstuff that has been long overdue to be done. This includes going through nearly a century's worth of the Transactions of the Devonshire Association which are on loan to the CFZ from our old pal Lionel Beer...

The comma butterfly is now a quite common resident of Devon, particularly the south of the county. But it was not always so. I have read how it is a lepidopteral success story, but never seen the historical evidence for myself. Until now!

The Comma Butterfly (Polygonia c-album) in Devon. In a letter to Nature of Oct. 26, 1929, Dr. Sherwill Dawe records the occ 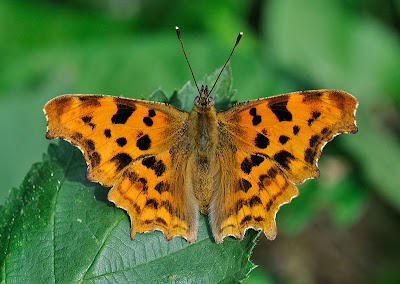 urrence of the above insect at Chiswick. This letter elicited others from correspondents who had seen the insect, in various parts of the country. A review of the insect's range was supplied by Mr. N. D. Riley of the British Museum. It appears to have been radially dispersed from a Wye Valley centre since about 1915, or somewhat previously, first in a north and north-eastern direction, later eastern and southern. Of late years it has reached the south-west, being recorded from Devon in 1922 and again in 1929. In 1928 I had two fine specimens in my garden for several days during September. It was also found in Dorset the same and following years. It would appear that Devonshire is at present the limit of its extension in a south-westerly direction,and it is to be hoped that no wanton destruction of it may be the result of its appearance in the County. G. T. HARRIS

From the Haunted Skies archive, a Herald Trib 1997 review of the book, "Why People Believe Weird Things" by Michael Shermer.

On this day in 1945, under operation paperclip, the US government admitted 88 scientists that had worked for the Nazis in order to prevent their knowledge falling into the hands of the USSR and the UK.

Tree-Dwelling Animals Were The First To Fly, New R...

'World's smallest' dragon sculpture unveiled
Wales is home to 13 new sea sponge species
British engineering team heads to Antarctica to ex...
Farmed Fish Fed Vegetable Matter May Have Residual...
Personality Predicts Success of Invasive Species (...
Yakini The Gorilla Goes To The Doctor (PHOTOS)
The bulk of the scientists recruited by operation paperclip were rocket scientists primarily involved in the manufacture of weapons, which in turn gave birth to the space race and rockets: