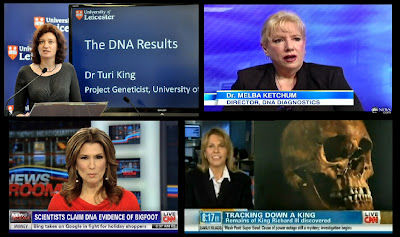 Last month saw not one but two major news stories revolving around the subject of DNA analysis. In America, there was the long-awaited publication of the Bigfoot DNA results, first announced in a press release in November last year.

In Britain, there was the just as eagerly anticipated announcement that the remains unearthed in Leicester last September are indeed those of King Richard III, who was killed at the Battle of Bosworth in 1485.

A BLAST FROM THE PAST - DON'T WE LOOK YOUNG 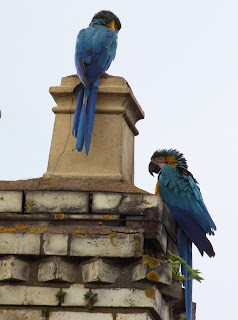 Today`s Country Diary in The Guardian, March 14th 2013 carries an interesting account by Phil Gates of the feral macaws of the town of Kirkby Stephen in Cumbria:

“From the moment the nerve-jangling screeches – on a par with the sound of glass stoppers turning in the necks of bottles – were unleashed from the rooftops, it was obvious which of the shoppers in the street were local residents and which were first time visitors. The former went about their business without an upward glance; the latter stopped in their tracks,stared upwards, then reached for their cameras. Kirkby Stephen`s small flock of scarlet macaws has been a raucous feature of the town ever since the late John Strutt (1) began to provide a refuge for unwanted parrots on his farm at nearby Eden Place.As a dedicated animal lover and conservationist, Strutt managed his 900 acres using low-intensity farming methods for the benefit of birds, butterflies and wild flowers, and also indulged his passion for exotic birds, which he could never bear to see confined to an aviary.

Our first encounter with his feral macaws was on a footpath near his farm, where a few feathers left under the trees by a bird preening left us puzzling over who had been the owner of such exotic plumage, all the primary colours from a child`s paintbox. For the most part, the macaws stay close to home in the Eden valley, but they are regular visitors to Kirkby Stephen`s rooftops, where they have become local celebrities. There will be some who will point to the proliferation of troublesome, feral ring-necked parakeets in and frown on the deliberate introduction of any non-native species, but this population has remained small, stable and local.

As we crossed the road to the bakery, a pair peered down at us from the parapet above, Technicolour adornments to grey roofs on a grey day. Then they flew low and fast above cars and lorries along , trailing long tail plumes and ear-piercing screeches – on a bitterfly cold Cumbrian afternoon.” (2)

There is a You Tube video showing the macaws – see Ref 3.
Posted by Jon Downes at 2:24 PM 1 comment:

On Sundays as regulars all know

*  Jon Downes, the Editor of all these ventures (and several others) is an old hippy of 53 who - together with his orange cat (who is currently on sick leave in Staffordshire) and his new orange kitten puts it all together from a converted potato shed in a tumbledown cottage deep in rural Devon which he shares with various fish. He is ably assisted by his lovely wife Corinna, his bulldog/boxer Prudence, his elderly mother-in-law, and a motley collection of social malcontents. Plus.. did we mention the orange cat?
Posted by Jon Downes at 1:35 PM No comments:

Happy St Patrick's day to all our Irish chums (and also to students who will no doubt be enjoying the opportunity for a piss up while wearing a 'zany' green plastic hat with a brewery’s logo on it).
And now the news:


You can't get more Irish than this:
http://www.youtube.com/watch?v=46EXY4oP1Do
Posted by Jon Downes at 1:34 PM No comments: