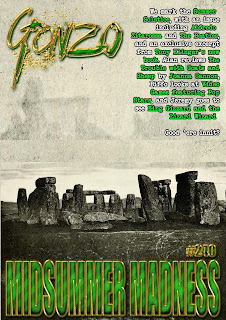 Gonzo Magazine Issue 40
THE SUMER IS ACUMEN IN ISSUE
http://www.gonzoweekly.com/
We mark the Summer Solstice, with an issue including Alfredo Zitarossa and The Beatles, and an exclusive excerpt from Tony Klinger’s new book. Alan reviews The Trouble with Goats and Sheep by Joanna Cannon, Biffo looks at Video Games featuring Pop Stars, and Jeremy goes to see King Gizzard and the Lizard Wizard.

And there are radio shows from Mack Maloney, Strange Fruit, and the final episode of Jeremy Smith's Seven Deadly Sins, but Friday Night Progressive is on hiatus for a few weeks. We also have columns from all sorts of folk including Roy Weard, Mr Biffo, Neil Nixon and the irrepressible Corinna. There is also a collection of more news, reviews, views, interviews and pademelons outside zoos (OK, nothing to do with small marsupials who have escaped from captivity, but I got carried away with things that rhymed with OOOOS) than you can shake a stick at. And the best part is IT's ABSOLUTELY FREE!!!


SPECIAL NOTICE: If you, too, want to unleash the power of your inner rock journalist, and want to join a rapidly growing band of likewise minded weirdos please email me at jon@eclipse.co.uk The more the merrier really.
Posted by Jon Downes at 5:49 PM No comments: