My Mother would have been 94 today

There will come a glory in your eyes,
There will come a peace within your heart;
Sitting 'neath the quiet evening skies,
Time will dry the tear and dull the smart.
You will know that you have played your part;
Yours shall be the love that never dies:
You, with Heaven's peace within your heart,
You, with God's own glory in your eyes.
Posted by Jon Downes at 6:31 PM No comments: 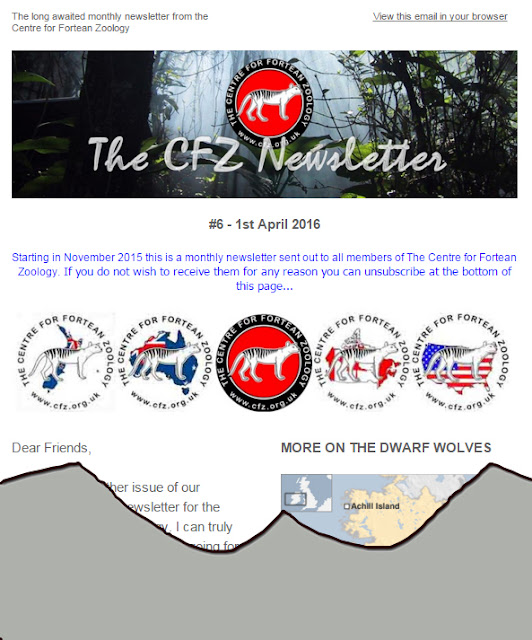 For those of you not in the know, at the beginning of each month we send out a newsletter to all members of the CFZ. The most recent included articles on dwarf wolves in Ireland, Richard's preliminary expedition report, Cryptozoological Notes and Queries,  and other stuff of interest.

Posted by Jon Downes at 5:54 PM No comments:

Bigfoot Evidence
Tonight's guest, Corey, lives in a small town, in Alaska. Corey loves spending time in the outdoors. He loves to camp, fish, hunt, and do pretty much ...

Bigfoot Research News
It has been reported by many Bigfoot researchers that Sasquatch often walk with an inline step. In this particular trackway, found in the high country of ...

Bigfoot Evidence
From the youtube channel of the Trail To Bigfoot team: We go off trail to examine the knock location area. We find a super highway network of trees.

Eyewitness Describes What He Believes A Bigfoot Is After Seeing One

Bigfoot Evidence
What is a bigfoot? Why do they stink? These and more questions are answered by a panel of eyewitnesses and researchers. The description one ...

Verum Et Inventa - WordPress.com
The incident happened over a decade ago, but the guest is only recently coming to grips with the event and telling his story. I think this man sounds ...

Bigfoot Research News
As if the Ohio Bigfoot Conference didn't have enough of a stellar line-up already—word just came out that the comedian/actor Bobcat Goldthwait will ...
Posted by Jon Downes at 12:00 PM No comments:

ON THIS DAY IN - 1581 - Francis Drake completed the circumnavigation of the world.
And now some more recent news from the CFZ Newsdesk