Almost anyone with an interest in cryptozoology will have seen Charles B. Pierce’s classic low buget 1972 horror flick The Legend of Boggy Creek, the atmospheric docu-drama-style with the shadowy ape-thing haunting the bayoux and river bottoms, and periodically emerging to terrify small rural communities such as Fouke and Jacksonville. The story was based on real events and the film utilized real witnesses. The movie was more than the sum of its angles. A man in an ape suit wandering around in the shadows was transformed into something genuinely disturbing. The film had an immediacy to it. It felt like it could happen in your own back yard. No amount of CGI or big name Hollywood actors could ever recapture its feel, as proved by the worthless 2011 remake.

The Fouke Monster, as it became known, has been covered in other books on hominids both in the USA and worldwide. But Lyle Blackburn’s work, The Beast of Boggy Creek, focuses in on this one area, and is all the better for it. The Beast of Boggy Creek is also unique in that it looks not only at the sightings of the creature / creatures, but at their cultural and social effects.

There is a detailed history of Fouke, a small town in southwest Arkansas close to the border with Texas, and a comprehensive list of creature sightings stretching back to 1909 and up to 2010. The scene is thus set for the events of 1971 when a spate of sightings and an attack made the newspapers, and grabbed the attention of the world.

Lyle skilfully recounts the strange saga, interviewing people who lived through the events. He also chronicles the story of how the cult film, based on the encounters, was made on a wing and a prayer, and went on to become a classic of Fortean cinema.

The film spawned a whole sub-genre of low budget sasquatch films, none of which captured the brooding menace of the first movie.

When the dust settled and the world’s attention moved on, the sightings continued. Lyle records many such encounters through the ‘70s, ‘80s and ‘90s, to the present day, with some of the later sightings arguably even more dramatic than the ‘classic’ period. Many of these have never been recorded prior to this book and it is always good to read new information.

Of special interest to both movie buffs and cryptozoologists is a scene by scene breakdown of Pierce’s classic, comparing each scene with the real life events that inspired it.

Theories as to the nature of the beast are examined, including the old chestnut of an escaped ape from a circus train wreck, a Scooby-Doo-style scare story to keep people away from moonshine stills, or even a horror invented to keep black people away from the town! The author tentatively comes down on the side of an unknown species of ape and I must agree with him here.

The monster’s appearances in books, records, TV and memorabilia is also looked at.

You could have all the information above and still have a lousy book if it were not presented well, but Lyle shows himself not only to be a first-rate researcher but a master of the written word. The Beast of Boggy is almost poetic in its delivery, making it not only a mine of information but a pleasure to read as well.

In the words of the narrator of The Legend of Boggy Creek “I was seven years old when I first heard him scream. It scared me then and it scares me now.” 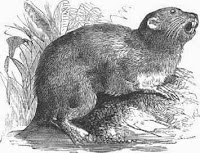 Posted by Andrew May at 2:21 PM No comments:

Another jolly day lies ahead. Hopefully today Graham will finish both his review of Hawkwind's gig in Bridport last week, and the shelves in the library.

In the meantime, what have we got for you?
We have a new live picture from Michael Des Barres, which is so good I want to know more about it:
http://gonzo-multimedia.blogspot.com/2012/05/michael-des-barres-great-new-onstage.html

We have a review of Auburn, which really seems to get what the band are about:
http://gonzo-multimedia.blogspot.com/2012/05/auburn-cool-review-actually-its-hot.html

We have a Dutch radio interview with Galahad:
http://gonzo-multimedia.blogspot.com/2012/05/galahad-dutch-interview.html

We have another vintage slice of Wally from the Old Grey Whistle Test back in 1974:
http://gonzo-multimedia.blogspot.com/2012/05/wally-more-ogwt-1974.html

And finally we have an exclusive slice of video from the aforementioned first night of the current Hawkwind UK Tour:
http://gonzo-multimedia.blogspot.com/2012/05/hawkwind-opening-night-of-their-uk-tour.html

http://cryptozoologynews.blogspot.com/
On this day in 1852 Jenny Lind left America after her hugely successful tour organized by P.T. Barnum.

And now the news:
Official caught poaching after deadly chopper cras...
Mars 'has life's building blocks'
How EU farming policies led to a collapse in Europ...
World's Largest Dog Eyes: Bruschi The Boston Terri...
One lioness killed and another removed from Nairob...
Man divorces wife because of her 550 cats
An Introduced Bird Competitor Tips the Balance Aga...
Insect dating back 1,400 years discovered in Sitti...
First mammal extinction in Australia for 50 years ...
A Whale of a Discovery: New Sensory Organ Found in...

By the magic of the CFZ time machine (which I think is technically the combination of Silas Hawkins’ car and the laptop I wrote the script on) P.T. Barnum himself made an appearance at the Weird Weekend last year:
http://www.youtube.com/watch?v=ryjJ16y5LTY
Posted by Jon Downes at 8:02 AM No comments: