THE COLDHARBOUR DIARIES: A whale of a sale! 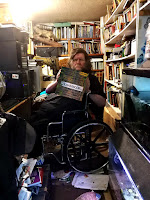 BBC News
A tourism initiative says it has looked "beyond the monster legend" to find reasons for people to visit Loch Ness. VisitInvernessLochNess (VILN) ...
Posted by Jon Downes at 1:12 PM No comments:

ON THIS DAY IN  -   1146 - European leaders outlawed the crossbow.
And now some more recent news from the CFZ Newsdesk