Most of us dread the idea of having to do a big spring clean. But when scrubbing and brushing is done in the company of fish, string rays and giant turtles, it doesn't seem so bad. Staff embarked on the Sea Life London Aquarium's annual deep clean, hopping into the tanks to scrub, scrape and wipe down the watery habitats.

You've missed a bit: Aquarist Ross Davey gets company from a sting ray as he cleans their pool

Graham writes: When I saw this story, I reflected that it was all a bit different to my fish-tank cleaning activities at the CFZ. I see, from the photos, that these people use tooth-brushes, though - just as I do. But the tanks at the CFZ aren't big enough to require diving gear! 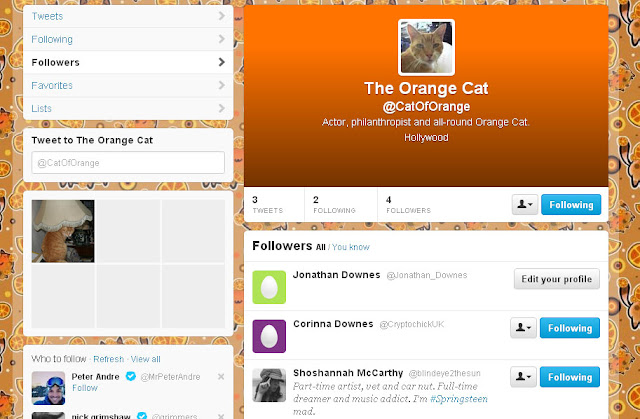 According to my stepdaughter Shoshannah, The Orange Cat now has a twitter account. @CatOfOrange. She says that it is important that he gets more followers than Lady GaGa. However, at the moment he only has 4 followers. I do not understand Twitter at all, and it makes very little sense to me, so I pass it over to you out in Gonzoland...

This year marks the 80th anniversary of the first sighting of the modern age of the Loch Ness Monster and to mark this milestone a symposium is to be held in the city of Edinburgh on the 6th of April 2013. A variety of speakers have been lined up to talk on various aspects of this enduring story ending with a panel discussion on what the Loch Ness Monster is and is not. The speaker roster is below and the official website is here and if this is not yet up and running try the website of co-organise Gordon Rutter at this link.

The event will be sponsored by Kraken Rum and will be run under the umbrella of the Edinburgh International Science Festival which runs from the 23rd March to the 7th April. The venue will be The Counting House and further details of the event can be found again at the aforementioned websites.

Ticket purchase is essential to attend. To buy tickets, send a paypal transfer to co-organiser Charles Paxton (cgp2@st-andrews.ac.uk) for £20 – no physical tickets will be issued but the printed Paypal receipt on the day we be matched to the attendee list.

While we are on the subject of Loch Ness Monster symposiums, I would say this is the fourth event to bear that title.  The word "symposium" itself comes from the Greek word for a drinking party which seems appropriate considering the event is sponsored by a rum manufacturer and some form of alcohol will no doubt flow later. These ancient events would be held to debate, recite or celebrate events or works. I guess the drink lubricated the smooth running of the event and the "symposiarch" would decide on the strength of the drink served up depending on the type of event. Who will have that task in April is uncertain!

As far as Nessie is concerned the most famous symposium was the one that never happened in 1975. The word was out that Robert Rines and his team had got close up head, neck and body pictures of the creatures and various people from scientific and academic backgrounds were to be invited to a symposium in Edinburgh under the chairmanship of Sir Peter Scott and the sponsorship of the Royal Society to discuss these images.

In the words of the Beatles song "I get by with a little help from my friends". Today there are some posts from Benny, some updates from Bigfoot Evidence and my first FOZ guest blog donated by Jeff Albertson:

And so another day dawns. It is grey and wet, but still remarkably mild for the time of year. I voiced my concerns about the long term effects of this weather on the latest episode of OTT, and Lars Thomas wrote: "You are almost right about the mild winters and the wildflowers and butterflies. A lot of flowers - bulbs, seeds and so on - do need frosting in the ground to ensure a good crop of plants in spring. But the butterflies, or actually the eggs, larvae or pupae wintering in the ground, do not as such need a period of frost. They need their enemies, bacteria, fungi and parasites to get a good beating from the frost. In mild winters like this year, all the things that can kill a hibernating insect have perfect conditions to wreck havoc among them - and that's why a mild winter is usually followed by a poor insect or wildflower year". Thanks Lars.

*  Jon Downes, the Editor of all these ventures is an old hippy of 53 who - together with his orange cat - puts it all together from a converted potato shed in a tumbledown cottage deep in rural Devon which he shares with various fish and batrachians. He is ably assisted by his lovely wife Corinna, his bulldog/boxer Prudence, his mother-in-law, and a motley collection of social malcontents. Plus.. did we mention the orange cat?
Posted by Jon Downes at 12:01 PM No comments:

On this day in 1927 Fritz Lang's film Metropolis was released in Germany.
And now the news:


Watch the remastered and restored version of Metropolis here, good film:
http://archive.org/details/MetropolisFritzLang1927Remastered
Posted by Jon Downes at 12:00 PM No comments: