I have often told Emma Osborne that she is like Sooty. She takes something moribund that I don't understand like our CFZ Press Facebook pages, sprinkles 'oofle dust' all over it and makes it a success.

As her husband Matthew so charmingly puts it, once again I have had my bottom kicked by the Sooty of the CFZ, she waves her hand at things that then work, she says we need more items in our online shop at www.zazzle.co.uk/cfzjon*

Since 2009 we have had 13 very nice products for sale there, but as Emma pointed out if someone bought an item they would not be inspired to return. Emma is now setting to work to make as many products as she can, as this is written at 15:03 the first wave are yet to appear as it takes 24 hours or more for them to be approved, but we have over 300 items awaiting for approval with Weird Weekend 2012, Big Cat Study Group ,CFZ Australia and CFZ USA being first to appear. She has been assisted in this mass onslaught by her husband, it may be closer to the case that she has done the work while he fetched the coffees.

Do view the new items at www.zazzle.co.uk.cfzjon* every item gives at least 10% to our funds which will go towards things like equipment, general running costs and much more and remember to keep checking back as there will be a lot of changes, also feel free to send the link to whomsoever you think may wish to view it
Posted by Jon Downes at 9:58 PM No comments: 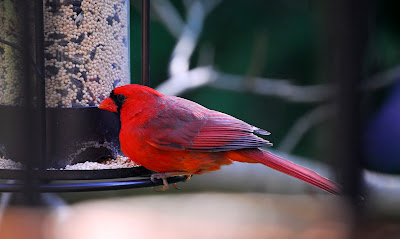 Since relocating to our new home in Chapel Hill, North Carolina, my better half and I have taken up bird watching, if for no other reason than there is a plethora
of species new to us Northerners.

So far we have documented at least 19 species and counting.

Here is the North Carolina State Bird, the common Cardinal. Not nearly as exotic as our native Minnesota State bird the Loon with his eerie red eyes, but you gotta love the cardinal’s bright red habit.
Posted by Jon Downes at 1:12 PM No comments:

MUIRHEAD`S MYSTERIES: A HEART WARMING TALE OF A ROBIN`S NEST IN A PRAM

We all know that robin`s can build their nests in unusual places but I`ve never heard of one in a pram,until about 2 weeks ago. I found the following story in the Shropshire Star of April 13th 2012, whilst on a break with my church at Quinta near the Shrops-Wales border. There are 4 photos accompanying the story showing the nest and other aspects.

It`s an unusual place to raise a family – a children`s play pram hanging up inside a garage in Telford. But for this family of robins, it has proved the perfect nest for their five young – tucked away from the wintry weather.

It was only when Fiona Carroll-Stone decided to find the pram for her children to play with that they made the surprise discover. Mrs Carroll-Stone and her family were overjoyed when the eggs finally hatched on Easter Sunday. Mrs Carroll-Stone , of Donnington, said: “We were very worried when we realised the eggs were in there as the pram is hanging inside the garage and I had been shutting the door. “ I was concerned that I had shut the parent birds out but then we noticed a little square bit of wood which had rotted away on the bottom of the garage door and they were flying in and out through there. “Now we just leave the door open and we see the mum and dad hopping around in the garden gathering worms for the chicks. “We have a lot of birds around the garden but we have not had a nest like this before.”

Mrs Carroll-Stone said she and her husband Patrick, a self-employed builder,had gone to get the pram down for their children to play with when they spotted the nest. She said: “ We do not know how long the eggs have been there but there seem to be three chicks now. “ I have not had a good look because I`d not want to disturb them. “ I would have felt awful if they had not hatched.” Robins are renonwned for being tame around humans and the birds even fly in and out of the garage while Patrick works in there. Their three children Maizy,aged nine,Minny, aged three and Junior, aged one, are thrilled with their feathered visitors.

Mrs Carroll-Stone added: “ My son has been leaving the light on in the garage for them so that the chicks can see.” (2)

1. I contacted Judith Sanders for more information about the story but received no reply, but if you want to try her e-mail address is jsanders@shropshirestar.co.uk
2. Shropshire Star April 13th 2012
Posted by Jon Downes at 12:58 PM No comments:

New at the Frontiers of Zoology:
http://frontiersofzoology.blogspot.com/2012/04/short-history-of-flathead-lake-monster.html

New at Cedar and Willow, some more projected book jacket designs for Thomasina Edison:
http://cedar-and-willow.blogspot.com/2012/04/thomasina-edison-update.html
Posted by Jon Downes at 12:24 PM No comments:

Sunday morning, and I don't think that I can manage poetry every day. But what I CAN do is to manage a daily selection of massively groovy things wot I hope will instruct, entertain, and inform. I am finding this new project a very entertaining one, and I have high hopes for some interesting exclusives (quite massive ones actually) in the next few weeks.

First up today is a look at Rick Wakeman's new biography by Dan Wooding. We got our copy in our sticky little fingers yesterday, and golly it looks rather good. The designer must be a massively talented and good looking chap. There is also an exclusive excerpt, and an even more exclusive slice of Rick's past:
http://gonzo-multimedia.blogspot.com/2012/04/new-rick-wakeman-biography.html

The next thing is one of life's little synchronicities. I wrote about 'Curved Air' yesterday, to celebrate the release of their DVD in the Gonzo 'Lost Broadcasts' series. I actually didn't realise that the band had not only reformed, but are playing a gig in Devonshire on Friday. Guess which massively talented and good looking book designer who doubles as a hack journalist on a daily music blog has e-mailed their management to see if he can get an interview?:
http://gonzo-multimedia.blogspot.com/2012/04/curved-air-rejoice-guess-who-have.html

We have a link to very effusive review of the new 'Genre Peak' album by a geezer in Belgium:
http://gonzo-multimedia.blogspot.com/2012/04/genre-peak-belgian-review.html

I had never heard of 'Galahad' until the other day. My bad (as I believe the current vernacular has it) because they are one of the most interesting, clever, and literate rock bands that I have discovered in many a year. Expect me to wax lyrical upon the subject over the next few months:
http://gonzo-multimedia.blogspot.com/2012/04/galahad-golly-they-are-good.html

And finally, as regular readers of this blog will know, although the vast majority of what we cover is at least vaguely relevant to the releases on the Gonzo Multimedia group of companies, there are some things – mostly book reviews – that are included because I think they are interesting. Here, as always, I would like to say that any opinions expressed are my own and have nothing to do with any of those nice people at Gonzo Multimedia. Today we have a look at Derf Backderf's extraordinary graphic novel telling the true story about his schooldays with a boy who would eventually become one of America's most notorious serial killers:
http://gonzo-multimedia.blogspot.com/2012/04/review-at-school-with-serial-killer.html

I think I can promise you an entertaining and varied week ahead. Hold on tight, it’s gonna be a thrilling ride...
Posted by Jon Downes at 12:23 PM No comments:

On this day in 1952 David Icke was born. Icke in a controversial chap who claims, among other things, that we are ruled by a species of reptilian aliens. It would seem these aliens, should they indeed exist, are really crap at their job and hate hot pasties.

'Bird of prey twice swooped on my handbag dog and ...
Author reveals ‘Tasmanian tiger' spotting
USDA says Holstein in Calif. mad cow case was euth...
Old blood and tissue may hold a lot of secrets
Psychology in bigfooting – CONTROL
Amazing photo captures bear floating through the a...
First ever pictures of endangered Spotted Deer
Red Kites snatch sausages from barbecue
Amur leopard photographed in China for the first t...
RSPB acquires 563 acres of important habitat on sh...
Why do birds fly into windows?
Eight Species of Wild Fish Have Been Detected in A...
For Males Dying to Mate, Only Certain Females Will...
Tiny Shark Has Glowing Belly

Icke talks about Shape shifting reptile things messing up an anti capitalism protest. During the talk he urges people to make up their own minds on this kind of thing and not accept reality as they know it without questioning it... Maybe I'm part of the conspiracy but personally I don't buy it: