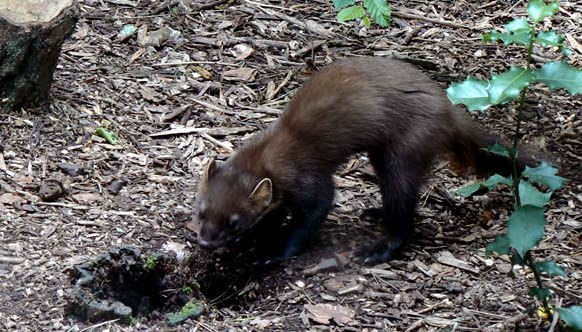 Today Jon posted on pine martens in ,this evening,also Wednesday, I found this link. Judge for yourself!

Rich
Posted by Jon Downes at 6:59 PM No comments:

TERATOLOGY: A gynandromorph cardinal: one half male, the other half female (Via Max Blake)

Male cardinals are bright red while females are a dull brownish color to provide camoflauge. This particular bird sports the colorations of both birds and is literall split down the middle.

Here’s photographer’s description of how he saw the bird:

"As you can see, the left side is male and the right female. For two winters the bird appeared at the feeder of a retired high school biology teacher. I was able to observe it on several occasions, and noticed that it didn’t associate with other cardinals, nor did I hear it produce any vocalizations. We attempted to capture it with mist nets so that Rob Fleischer and I could get blood samples for further study, but we caught every bird in the neighborhood except this one! Alas, it never returned the third winter.

Now how does this happen? I used to see this sometimes in my Drosophila flies, and we’ve long known how a half-male, half-female fly forms. In flies the sex is determined by the ratio of X chromosome to autosomes. Flies, like all diploid species, have two copies of every autosome. If you also have two X chromosomes, you’re a female because the ratio of autosomes to Xs is 1:1. If you have one X chromosome and one Y chromosome, your ratio is 2:1 and you’re male. The Y doesn’t matter here: if you lose a Y chromosome, and hence are XO, you still look like a male, although you’re sterile (the Y carries genes for making sperm). 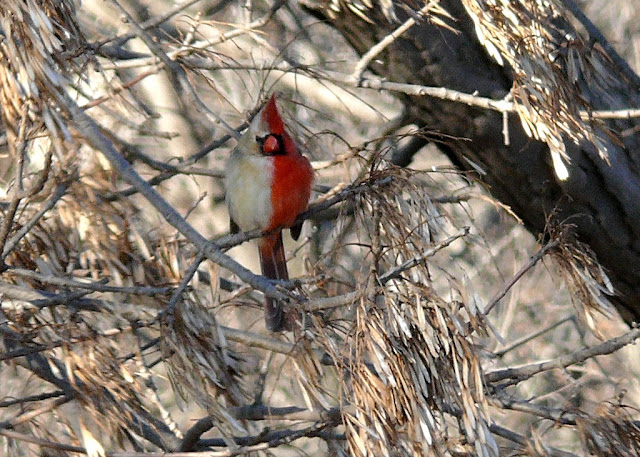 So to get gynandromorphs in flies, all that has to happen is that one X chromosome gets lost in one cell when the initial cell in a female (XX) zygotes divides in two. One half of the fly then becomes XX, the other XO, and the fly is split neatly down the middle, looking like the one below. But gynandromorphs don’t have to be “half and halfs”. X chromosomes can get lost at almost any stage at development, so flies can be a quarter male, have irregular patches of maleness, have just a few male cells, or even a male patch as small as a single bristle.

Last month's positions in this pinky colour, which I think is called cerise. Sales in the US were about normal, but in the UK they were terrible - possibly the worst October ever. Hopefully they will improve as we approach what is euphemistically known as the "Festive Season"....
Posted by Jon Downes at 2:03 PM No comments:

One of the perennial questions asked by critics of cryptozoology, is "what animals predicted by cryptozoologists have actually been found?"  In 1996 I published a book called The Smaller Mystery Carnivores of the Westcountry which - amongst other things - presented evidence for a surviving population of pine martens in Devon and Somerset. Now - 17 years later - I have been proved right, and am quietly confident that other claims that I have made over the years will also eventually be substantiated.


A confirmed sighting of a pine marten on Edington Moor has been reported to the Vincent Wildlife Trust (VWT) – the research charity which studies the wellbeing of British and Irish wild mammals.

According to the VWT, this is the first report of a Pine Marten in Somerset since human persecution resulted in the disappearance of the creatures from the whole of southern England by the end of the 18th century.
"I was driving home from Burtle across Edington Moor with my daughter Sarah," said Neil Champken, who reported the sighting.

"We knew immediately that it was something that we had not seen before. It was a little larger than a stoat, with longer legs and neck, a long bushy tail and a pure black face," said Mr Champken – who is the owner of the Somerset Cider Vinegar Company and lives on the Poldens.

Many thanks to Richard Muirhead for this news item. Also, by the way, the VWT claim is wrong: the species was meant to have been extinct here since the end of the nineteenth century.
Posted by Jon Downes at 1:39 PM No comments:

I shall be out most of the day today and so here is the short list for links for tomorrow:

On this day in 1872 the Mary Celeste, perhaps the worlds most famous ghost ship, was found floating off the Azores. The ship had apparently been abandoned in a hurry by all hands even the 2 year old daughter, with no signs of struggle or panic.

Well this is one Mary Celeste theory you might not have seen before:
http://www.youtube.com/watch?v=2dtRRkr0AHw
Posted by Jon Downes at 11:47 AM No comments: