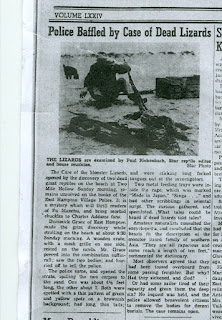 ...No inquest was held, and the police allowed benevolent citizens to remove the bodies for decent burials.The case remains open. (The lizards could have been Mangrove Monitors which have lived in Japan since the 1940s or the Malayan Monitor which is found in Singapore.)
Posted by Jon Downes at 2:20 PM No comments:

HOW MUCH IS THAT GONZO BLOG DOO-DAH MAN IN THE WINDOW?

ON THIS DAY IN - 1056 Byzantine Empress Theodora becomes ill, dying suddenly a few days later, without children to succeed the throne, ending the Macedonian dynasty
And now some more recent news from the CFZ Newsdesk