Conservationists, farmers and wildlife enthusiasts have rallied to the cause of one of England’s most threatened birds, the turtle dove, which has seen its worst year yet.
The farmland bird - forever associated with the festive season through the words of the seasonal song 12 Days of Christmas - is one of the fastest declining species in the country. Its numbers have crashed by 85 per cent since 1995 according to the State of the UK’s Birds report released last week, and sightings this summer were the lowest ever.
The British Trust for Ornithology published its latest Bird Atlas earlier this year which revealed that the turtle dove’s range has shrunk dramatically by 52 per cent between 1970 and 2010.
But this year has seen a campaign to save the turtle dove take off in a big way. Moved by the plight of the species 1,250 people rang in to the Operation Turtle Dove hotline in 2013 to report sightings, helping conservationists build up a vital picture of where the birds are nesting and foraging. The top county for sightings was Norfolk, closely followed by Suffolk and then Kent, Essex and Cambridgeshire.
Operation Turtle Dove, a partnership project between the RSPB, Conservation Grade, Pensthorpe Conservation Trust and Natural England, was launched in May last year and since then advisors have been busy visiting farms in the South and East of England to help them put in place measures to help turtle doves bounce back.
A review of the campaign to date has revealed that 64,000 hectares of farmland now has turtle dove measures – an area more than one and a half times the size of the Isle of Wight. Advisors have helped unlock £16 million worth of funding for farmers to carry out agri-environment schemes which will benefit the birds.
'We must act urgently to save these beautiful creatures now while we still can'
Simon Tonkin, farmland advisor for Operation Turtle Dove, said: 'Although we sing about turtle doves at Christmas, in fact they are in their African wintering grounds at this time of year.
'But closer to home we believe it is the loss of arable plants from our countryside which is having a major impact on them. These birds spend the summer in England where they rely on wild plants for food - but the way we farm today has meant there is often no room for them at the edge of fields.

A VERY HAPPY CHRISTMAS FROM THE CFZ 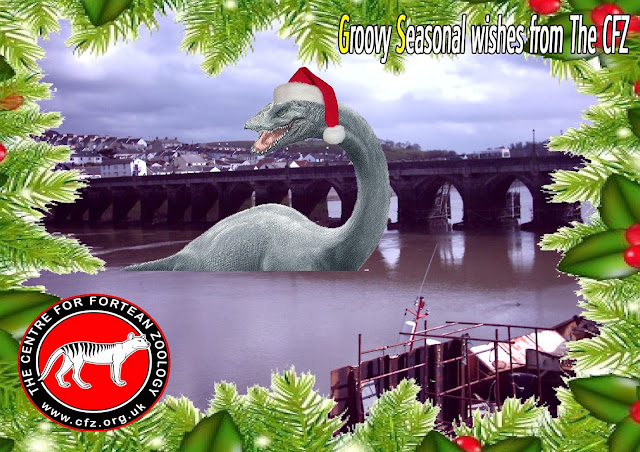 Email ThisBlogThis!Share to TwitterShare to FacebookShare to Pinterest
Labels: Christmas

The worldwide mystery cat phenomenon (or group of phenomena, if we are to be more accurate) is not JUST about cryptozoology. At its most basic level it is about the relationship between our species and various species of larger cat. That is why sometimes you will read stories here that appear to have nothing to do with cryptozoology, but have everything to do with human/big cat interaction. As committed Forteans, we believe that until we understand the nature of these interactions, we have no hope of understanding the truth that we are seeking.

*  Jon Downes, the editor of all these ventures (and several others), is an old hippy of 54 who - together with his orange cat (who is currently on sick leave in Staffordshire) and two very small kittens (one of whom is also orange) - puts it all together from a converted potato shed in a tumbledown cottage deep in rural Devon, which he shares with various fish and sometimes a small Indian frog. He is ably assisted by his lovely wife Corinna, his bulldog/boxer Prudence, his elderly mother-in-law and a motley collection of social malcontents. Plus... did we mention the orange cat?
Posted by Jon Downes at 10:53 AM No comments:

A word about cryptolinks: we are not responsible for the content of cryptolinks, which are merely links to outside articles that we think are interesting (sometimes for the wrong reasons), usually posted up without any comment whatsoever from me.
Two Maine residents will search for the elusive Sasquatch in “10 Million Dollar Bigfoot Bounty,” premiering at 10 p.m. Jan. 10 on Spike TV.

Photo courtesy of Spike TV
The cast of “10 Million Dollar Bigfoot Bounty,” premiering 10 p.m. Jan. 10 on Spike TV. Kat McKechnie of Bowdoinham is wearing a light green shirt and standing third from the right, and her partner in the competition, Michael Merchant if  Hampden, is sitting beside her in a grey shirt, fourth from right.
In the new reality show, Michael Merchant, 50, of Hampden and Kat McKechnie, 39, of Bowdoinham will team up to compete against eight other teams for a $10 million prize.
The hunt will take place in the most remote corners of the Pacific northwest, where Sasquatch sightings are most prevalent. The goal of the nine competing teams: capture Bigfoot or provide DNA and visual evidence of the creature’s existence.
The teams are comprised of lifelong hunters of all kinds (Bigfoot, big game, ghosts, etc.). They will put their knowledge and skills to the test as they battle the elements and outwit the competition.
Merchant, who studied biology at the University of Maine in Orono, has also appeared on Discovery Channel’s “Out of the Wild: Venezuela,” in which he hiked 70 miles through rugged Venezuela jungle; as well as Animal Planet’s “Infested” as a herpetology expert.
Read on...
Posted by Jon Downes at 10:52 AM No comments:

Merry Christmas to all our blog-readers.
And now the news: